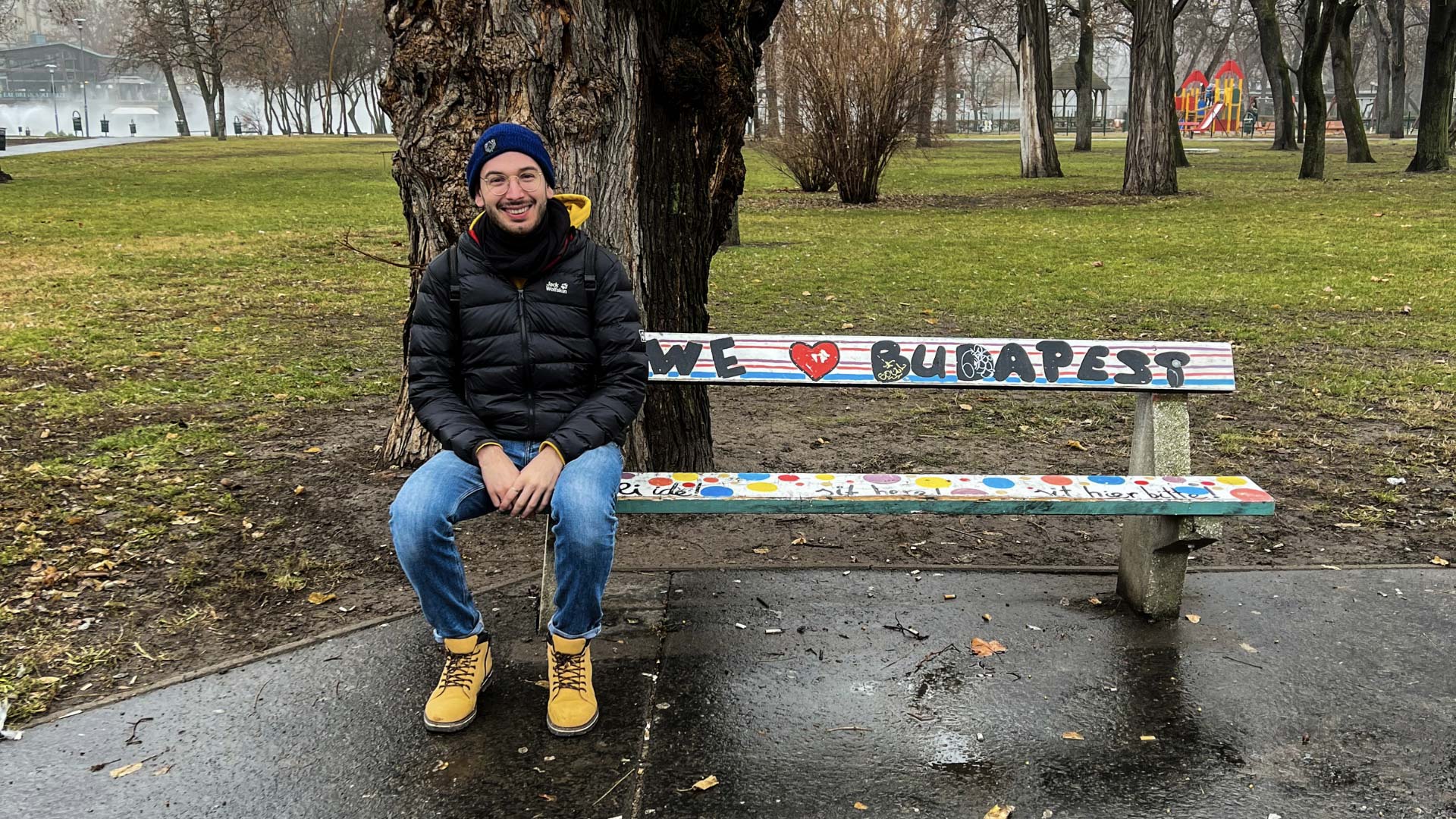 Budapest is not just a city, it is a culmination between the West and East in Europe. A place where cultural differences are in the day life’s order, and their preservation is intertwined with the symbols of the city.

Walking through the streets of the Hungarian capital, I managed to enjoy its true spirit and charm. In addition to doing the typical things for tourists, visiting museums, churches and other landmarks, today I will show you an atypical and unusual side of the city, namely its street inhabitants in the form of art.

The statue of Imre Nagy

One of Hungary’s most important prime ministers, Imre Nagy, played a decisive role in the revolution against the Soviet Union in 1956, which led to his execution in 1958.

The original statue was unveiled in 1996 near Parliament. The monument is the work of Tamas Varga. In 2019, the nationalist far-right government moved him to Marie Jazai Square. 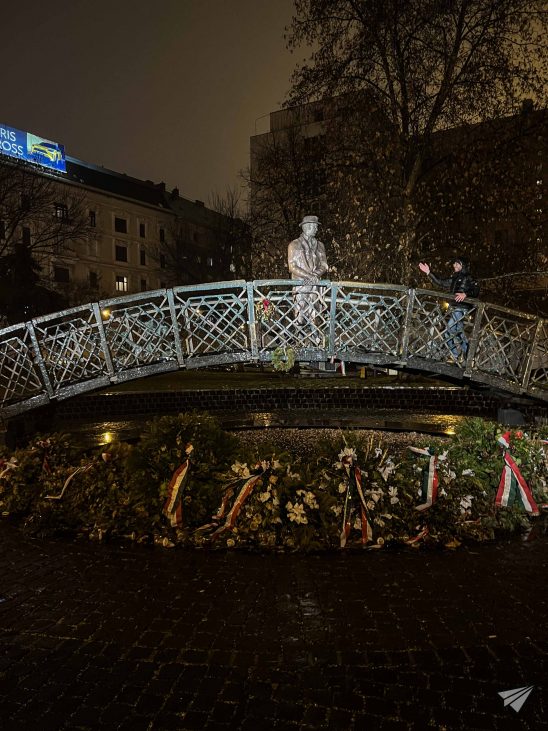 Shoes on the banks of the Danube

One of the most impressive monuments for me in the city is “Shoes on the embankment of the Danube coast.” The monument honours the Jewish victims who were executed on the banks of the Danube by the Cross of the Arrow militia group in Budapest, 1944-1945.

This memorial is simple but chilling, depicting 60 pairs of shoes left by the thousands of Jews killed by the Arrow Cross. The style of shoes – men’s work shoes, loafer for a businessman, women’s heels, even small shoes for a child – were chosen specifically to illustrate how no one, regardless of age, gender or profession, is spared. Placed in a casual way, as if people had just come out of them, these small statues are a grim reminder of the souls that once inhabited them – but at the same time they create a beautiful place for reflection and reverence.

Plates with the following text in Hungarian, English and Hebrew are placed at three points along the memorial: “In memory of the victims shot in the Danube by members of the Arrow Cross in 1944-45. Built on April 16, 2005.“ 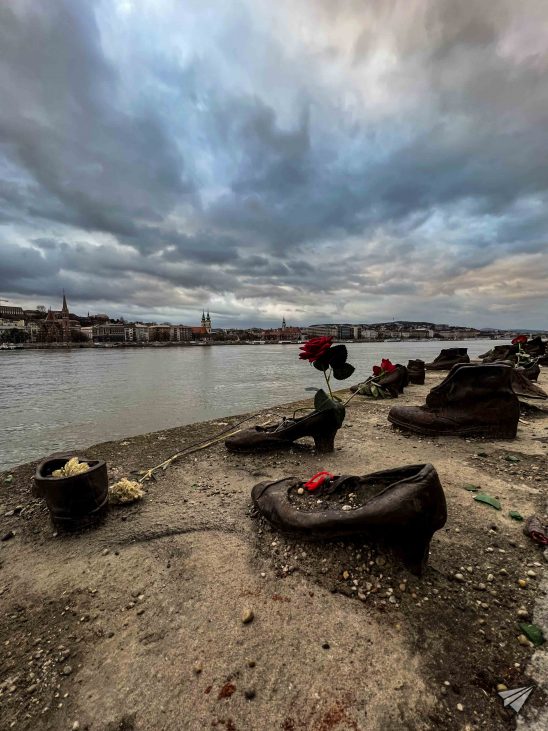 Statue of the Little Princess

One of the most iconic and attractive statues in the city is the statue of the Little Princess, who sits patiently on the fence of the tram in Vigado Square and waits to be photographed with each of its visitors.

The original sculpture was made in 1972 by Laszlo Marton. Originally, it was only 50 cm high, but in 1990, when the decision was made to raise it on the banks of the Danube, a larger version of the statue was made to delight residents. 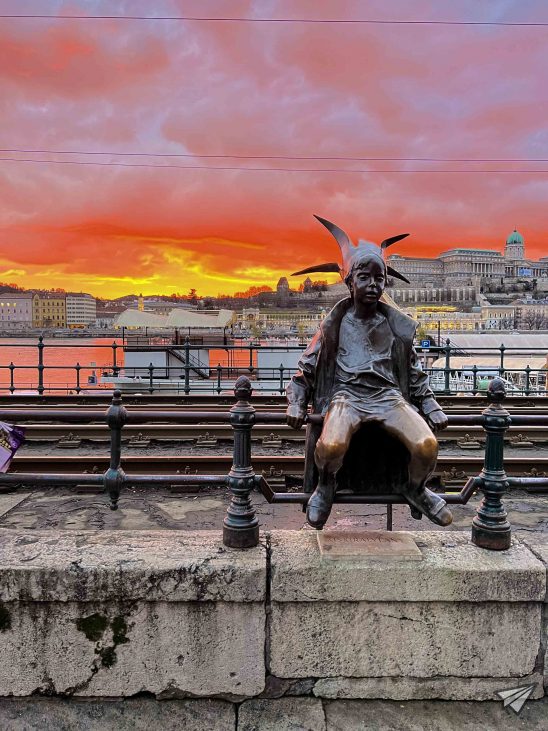 The fountain of King Matthias

Speaking of statues, this is perhaps the most impressive in art and style – the Matthias Fountain. It is located in the courtyard of Hunyadi, the most beautiful courtyard of the Royal Palace.

The popular attraction depicts King Matthias and his retinue resting at a spring while hunting. The statue was made by Alaios Strobl and has been on the site since 1904.

According to urban legend, if you toss a coin into the fountain, you will return to Budapest, just as you would do in Rome with the Trevi Fountain. 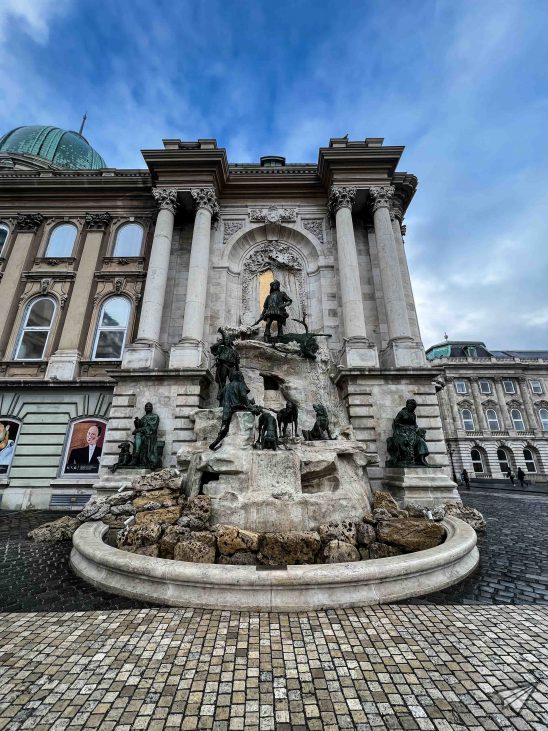 The fountain of children fishermen

The fountain of children fishermen is located in front of the Royal Palace. It was made by Caroli Senyei and was erected in 1900. This statue has no special history or occasion, but is simply an aesthetic acquisition of the palace, which adorns one of the gardens. 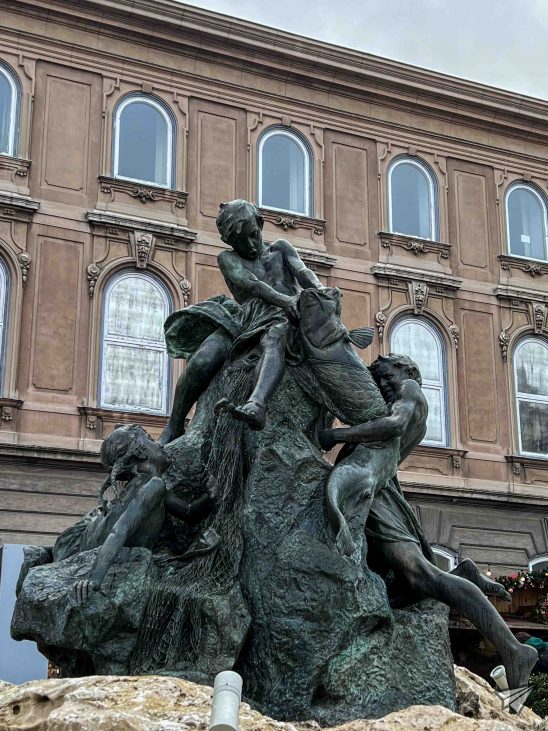 The Statue of Liberty in Budapest was first erected in 1947 to commemorate the Soviet liberation of Hungary from Nazi forces during World War II. Its location on Gellert Hill makes it a remarkable feature of Budapest’s cityscape. The 14-meter bronze statue stands on top of a 26-meter pedestal and holds a palm leaf. 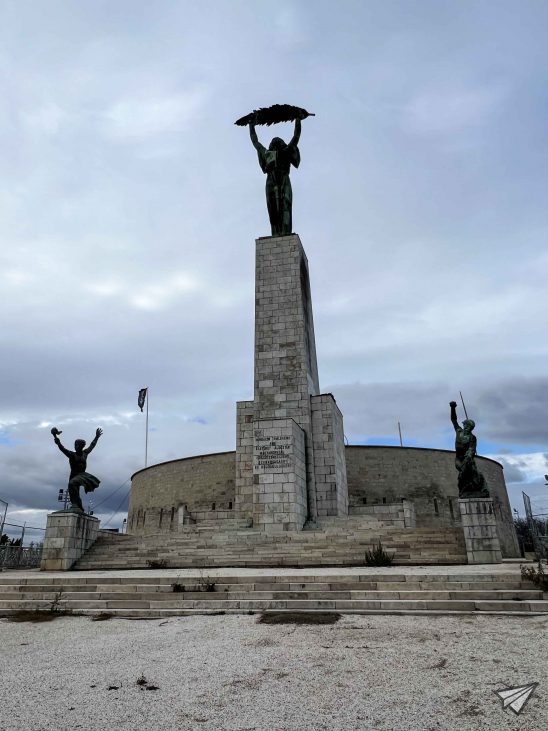 The statue of Ronald Reagan

Ronald Reagan may seem a bit out of place in the centre of Freedom Square in Budapest, but he is there because the Hungarian people wanted to show their gratitude for the efforts of the former US president to end the Cold War, which in turn helped put an end to Russian influence in the country.

The statue faces the US embassy, ​​but at the same time looks directly at the monument of the Red Army. 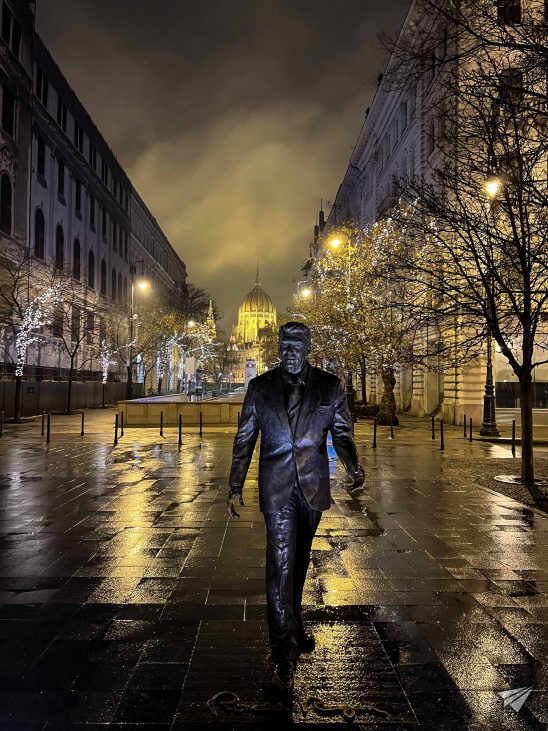 The statue of the fat cop

Not all statues should be serious and respectful. Proof of this is the statue of the fat policeman, also known as Uncle Carl. He watches tourists and locals walk around the neighbourhood of St. Stephen’s Basilica. Urban legend says that if you rub his belly, you will not have a weight problem and you can try all the delicious Hungarian dishes without worrying about gaining weight. 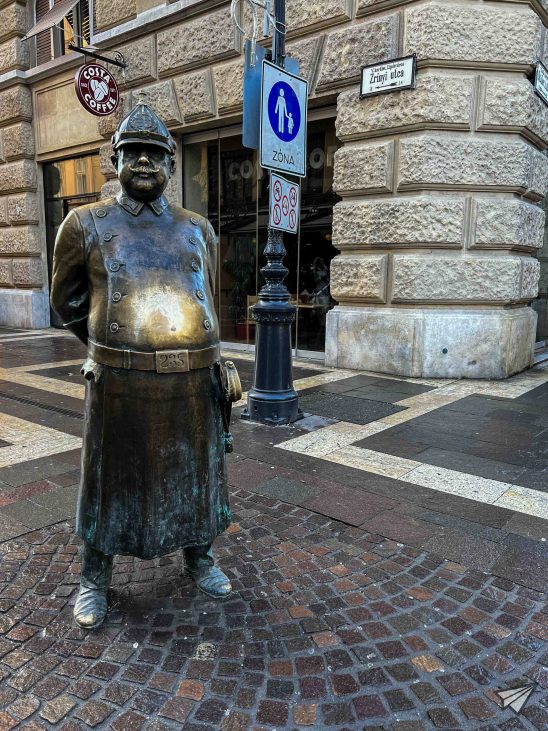 The statue of the boys from Paul Street

Hidden near Corvin Shopping Plaza is a group of statues depicting boys playing marble next to their school. The statues are charming enough, but the trio actually represents – the Paul Street boys – a gang of children from a popular book of the same name by Hungarian author Ferenc Molnar. The book tells the story of two groups of children who fight for supremacy for a plot of abandoned land. It is one of the most famous Hungarian classics and is taught in primary school. The scene these statues depict is one of the most memorable of the book’s early stages, where the threat of boys’ conflict is presented. 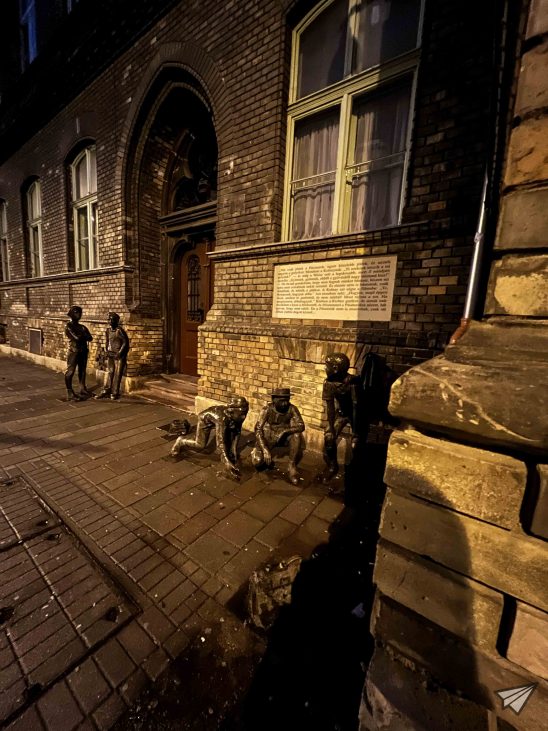 Statue of the Anonymous

The contemporary sculptor Miklos Ligeti depicts this important historical figure as a man who hides his face under a hood.

And a curious fact is that the Latin inscription at the base of the monument in translation means “the notary of the most glorious King Bella.” The Chronicles of Anonymous provide an insight into medieval Hungary and the origins of the Hungarians. And locals believe that touching the pen held by the sculpture makes everyone a better writer. 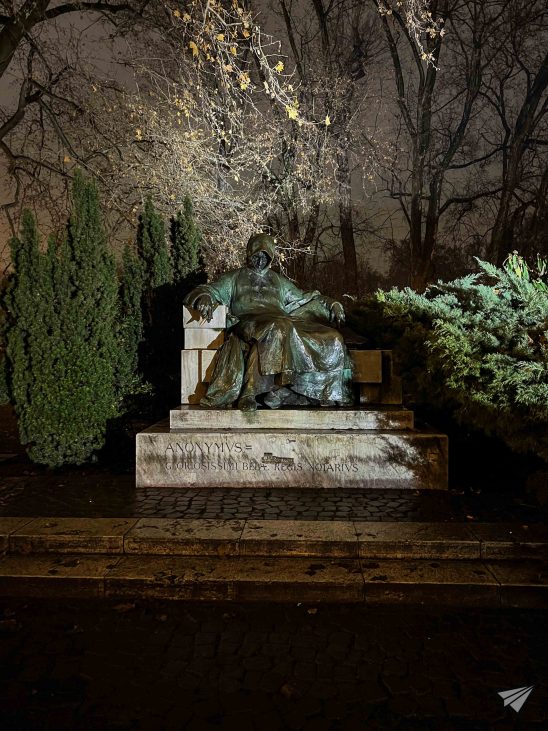 The graffiti of Budapest

This colourful graphite symbolizes a popular Hungarian myth of the white deer, which tells of the beast that brought Nimrud, the great legendary ruler of ancient Mesopotamia, to the lands of Hungary today. 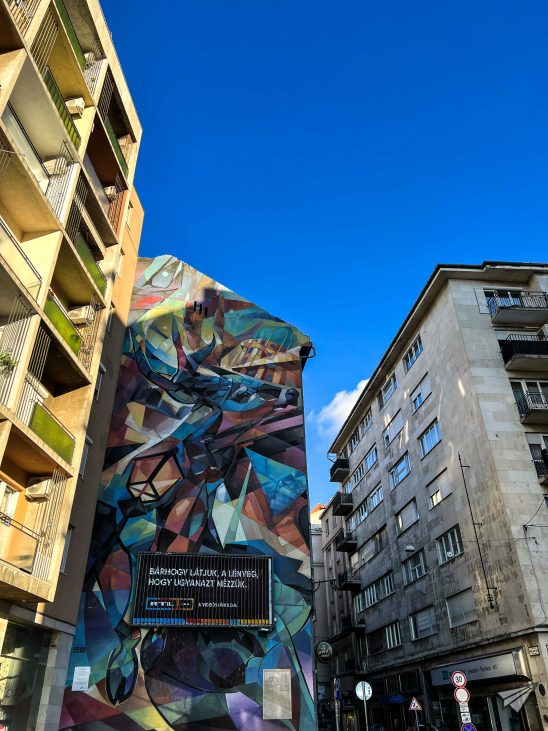 When you step onto Dob Street in the Jewish Quarter, you’ll notice a colourful, almost cubist mural above a restaurant on a firewall. It depicts a man on a surreal, brightly coloured background. The mural is by Spanish artist Okuda San Miguel is dedicated to Spanish diplomat Angel Sanz Briz, who saved up to 5,000 Hungarian Jews from the Holocaust in 1944.

The mural in the former Jewish ghetto was supported by the Spanish embassy in Hungary in memory of the hero, also known as the “Angel of Budapest” or “Spanish Schindler“. 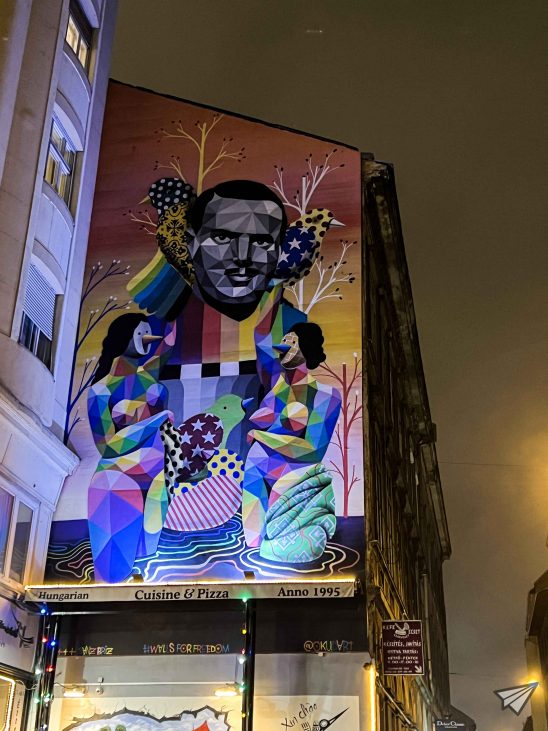 Man of the year

The 1956 revolution was a key event for the city. Although the citizens have failed to overthrow communism completely, they are gaining key reforms that left Hungary in a much more liberal environment than its neighbours.

The Man of the Year mural is simply a copy of the famous cover of Boris Chaliapin’s Time magazine and commemorates the battles for freedom as noble heroes. 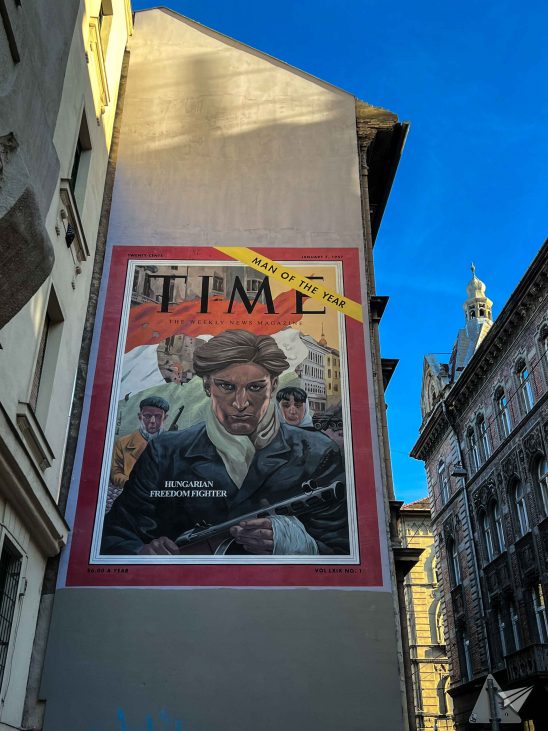 Perhaps my favourite graffiti from Budapest is this one – Alice in Wonderland! Great, detailed, with a slight joke to go back to our childhood and be free-spirited and curious like the main character of the fairy tale. The artist of the work is the Spaniard Dan Ferrer – whose works adorn New York, Rome, Milan and London. He creates with the idea of ​​sending an important message: children are the future full of potential, hope and it is good to be motivated. Borrowing from Alice in Wonderland, Dan portrays a lighter version of the little girl, with skin scars and a tired look, trapped in a house from which she will escape with the “eat me” cookies. 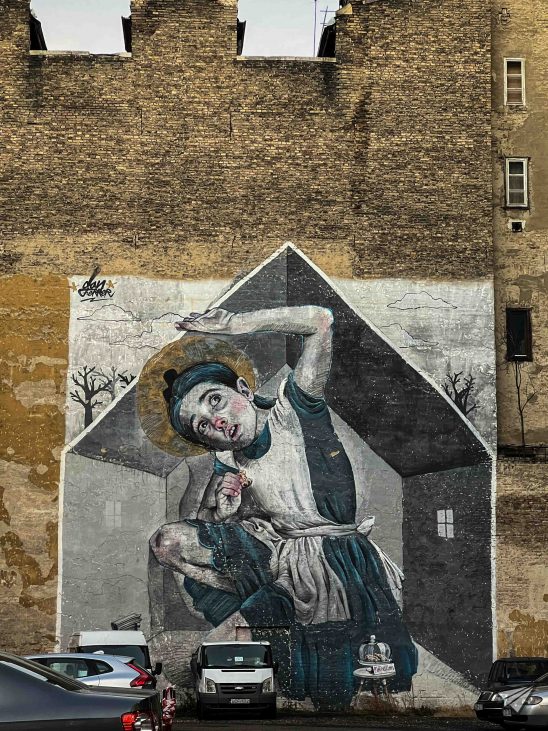 Although a little further from the centre of Quarter IX, the mural entitled Blue in Green is worth mentioning. The concept of this work is to depict and play with the plot “city submerged in water“. Giant creatures walk underwater, surrounded by magnificently calm shades of blue and green. 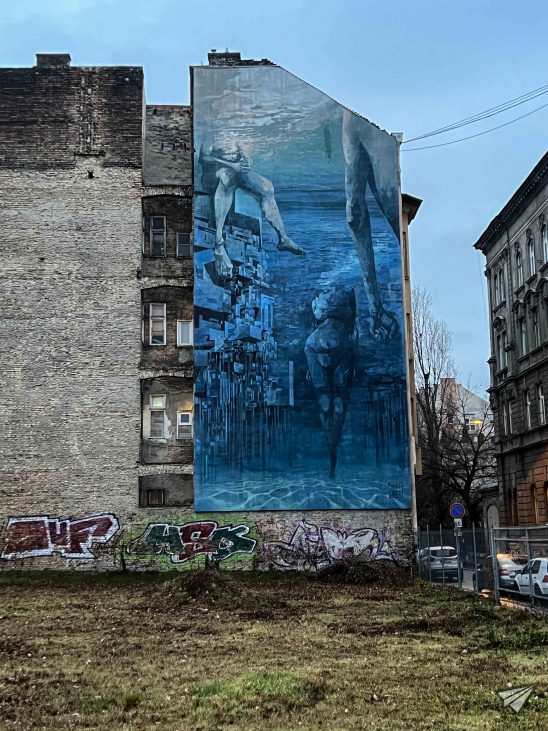 The inspiration for this huge mural embodies one of the great classics of regional cuisine, the Hungarian grey cattle with long horns – but here it is presented with cosmic enthusiasm. In complete peace, he lies down and enjoys the moment, in the company of a portion of grass and all this in royal attire. In this way, he welcomes every new visitor to his “urban meadow“. 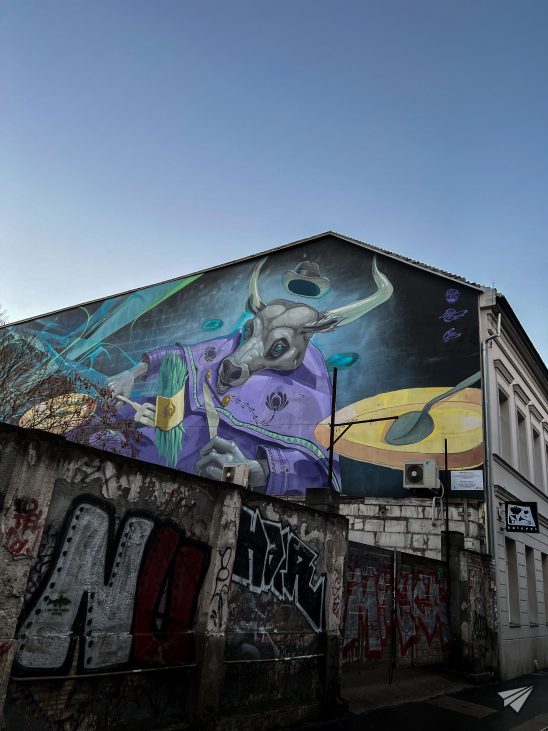 Overlooking a wide landscape from above the clouds, the graphite focuses on overcoming constraints and obstacles. The deliberate cutting of the piece shows a rope walker crossing a valley. The idea is for the viewer to see where the rope walker is coming from, but not to know where he is going. Leaving it to the imagination to decide. 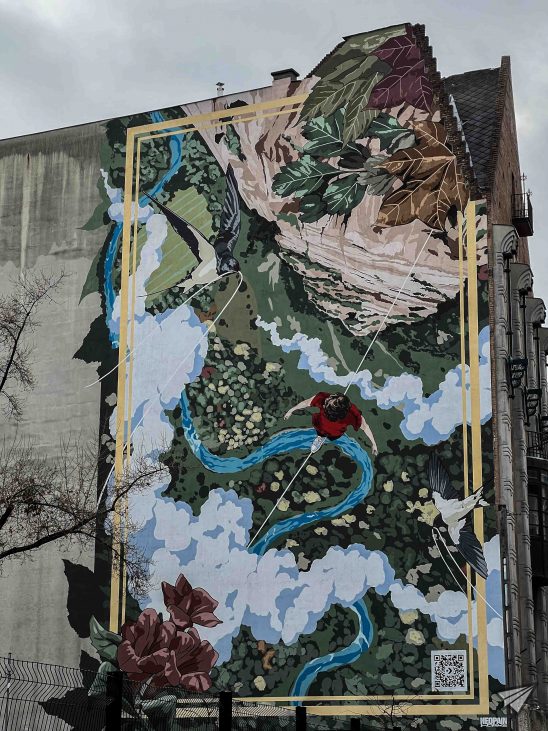 I guess Budapest wasn’t what you imagined it to be, was it? Especially after this colourful and different travel article. I can guarantee you that this is just a small part of the colourful treasures of the Hungarian capital that await you. But I stop here, because it will be your task to find the other attractive street masterpieces.