The pyramids of Bulgaria

It is a well-known fact that Bulgaria is a corner on planet Earth which has an abundance of natural resources that cannot be found just like that around the world. One of these treasures is the so-called “earth pyramids” phenomenon. These are majestic earth shapes that visualize interesting figures filled with many legends and curious facts.

With this publication I will walk you through different places in Bulgaria, where you will have the opportunity to see face to face these beautiful and irreplaceable natural resources. Additionally, that way together we will break the stereotype that there are pyramids only in Egypt.

I am opening a small bracket before we begin the exploration – nature not only creates, but also often destroys. The earth pyramids, unfortunately, are created in such a way that over time and under the influence of meteorological conditions, their main parts become thinner and this causes their disintegration. So, appreciate and admire these natural creations while we have them.

The Melnik region is unique in itself due to the geological history it has. The place is built of grayish-white Pliocene sands, mixed with clay layers, which over time have given birth to the bizarre shapes we are witnessing today. But few people know that in fact they are divided into three parts which most often people call by the common name Melnik pyramids. 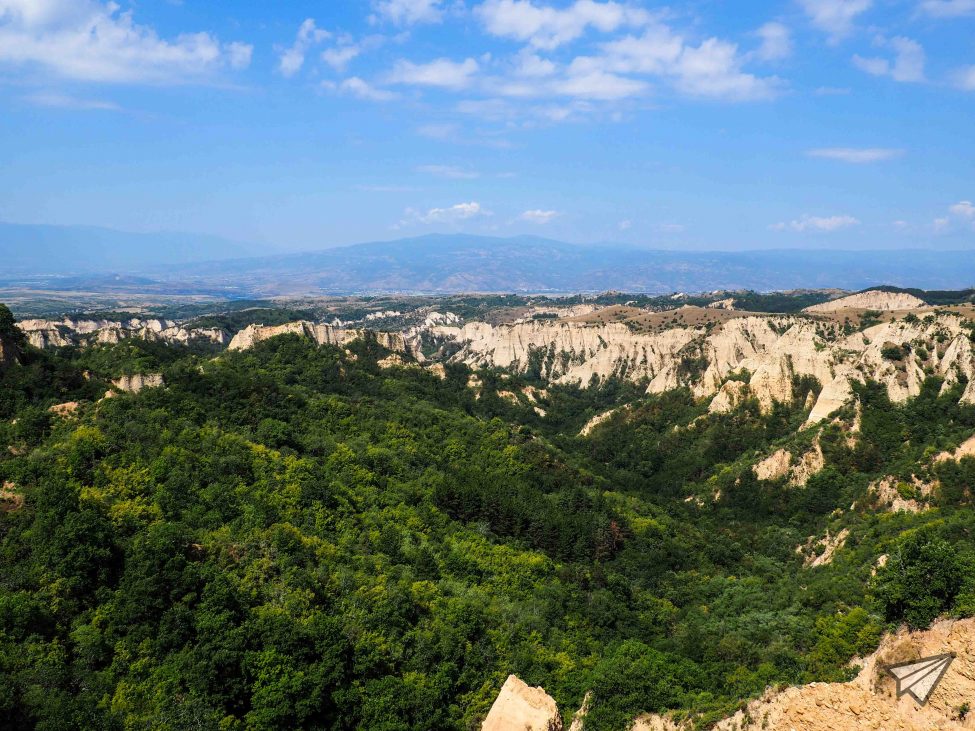 The Melnik pyramids are the largest and one of the most visited tourist attractions in Bulgaria. They are located at the foot of the southwestern part of the Pirin Mountain near Melnik. 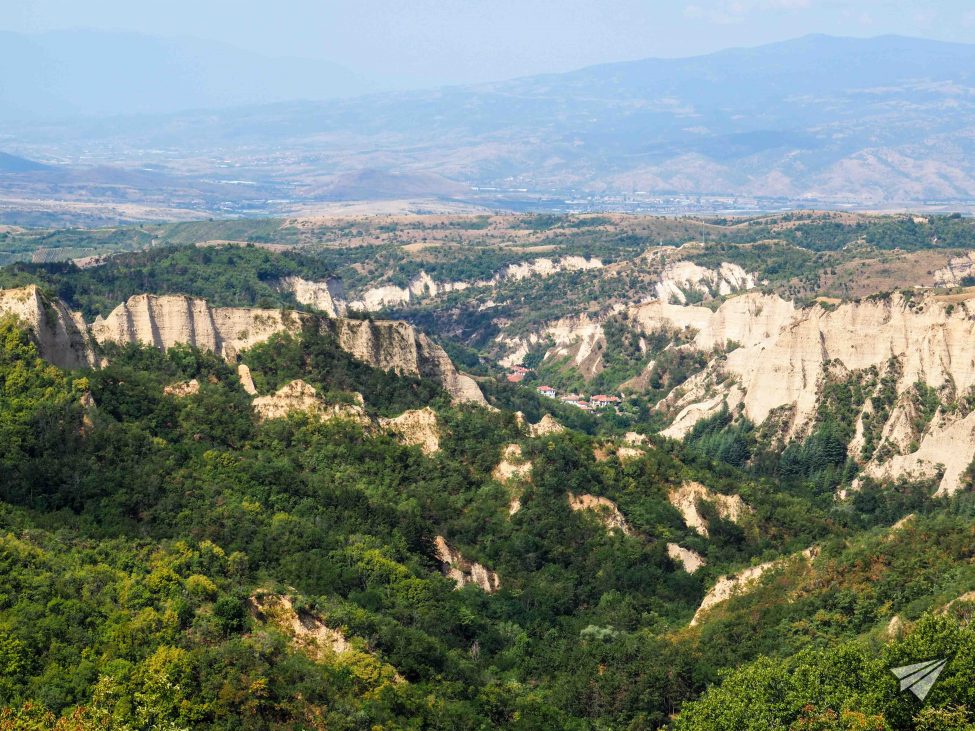 The Melnik pyramids vary in height, with the highest reaching up to 100 m. Characteristic of their appearance is that the slopes are sandy and in places almost completely vertical, and over time they change shape because they are in a constant process of natural construction and forming its kind. It is interesting that on some of their peaks can be observed vegetation of deciduous plants and grasses.

They (as well as the rest of this area) were declared a protected area in 1960, and in 1993, the area gained a new status of a protected natural site of international importance with an area of ​​50 sq. Km.

Karlanovo pyramids are located in the village of Karlanovo. They are part of the Melnik pyramids but are conditionally divided according to the settlements they cover. The specifics of the Karlanovo pyramids are the shape and size they have. They look like huge sand towers, some of which are up to 100 meters high and covered with grass. 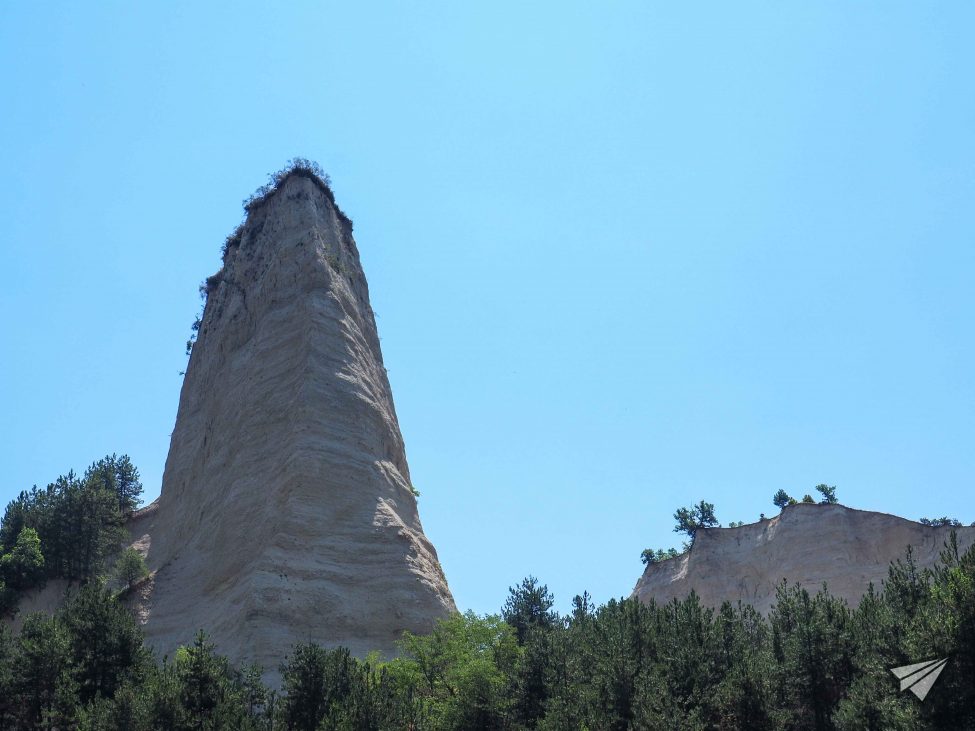 The Rozhen pyramids are located south of the village of Rozhen, and they are also part of the Melnik complex. In this part, the area is distinguished by the most famous group of rock mushrooms, which are located near the Rozhen Monastery and is easily accessible from the eco-trail connecting the town of Melnik with the monastery. I would even point out that crossing this path would give you the opportunity to immerse yourself completely in the atmosphere of the place. 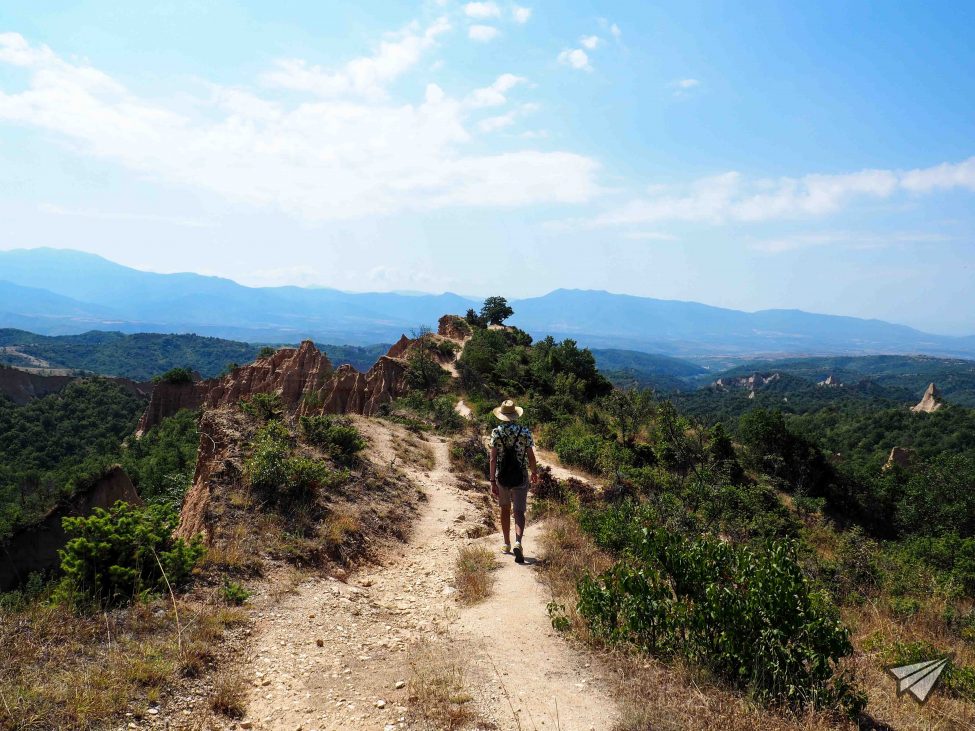 Useful information:
Melnik is located 177 km from Sofia, and the pyramids can be seen as you approach the city. They have “embraced” Melnik, making the city even more special and cozy.
The distance between the town of Melnik and the village of Karlanovo is 3 km. The pyramids can be seen from any point in the village, they are towering over the population;
The distance from Melnik to the Rozhen Monastery is 7 km. The pyramids can be observed by walking along the eco-trail, falling on the right of the entrance of the monastery in the direction of Melnik, there are signs;

The Stob pyramids are located at the western foot of the Rila Mountain, in the village of Stob. They are known to surpass all other earth pyramids with their picturesqueness. An eco-trail has been built on them, with which its visitors can get closer to the strange shapes of the pyramids and get a detailed look at each different shape that nature has created here. The most distinctive shapes are the conical ones, which end with a “stone” hat, reaching dimensions of 120 by 80 cm, which gives them the shape of slender mushrooms. 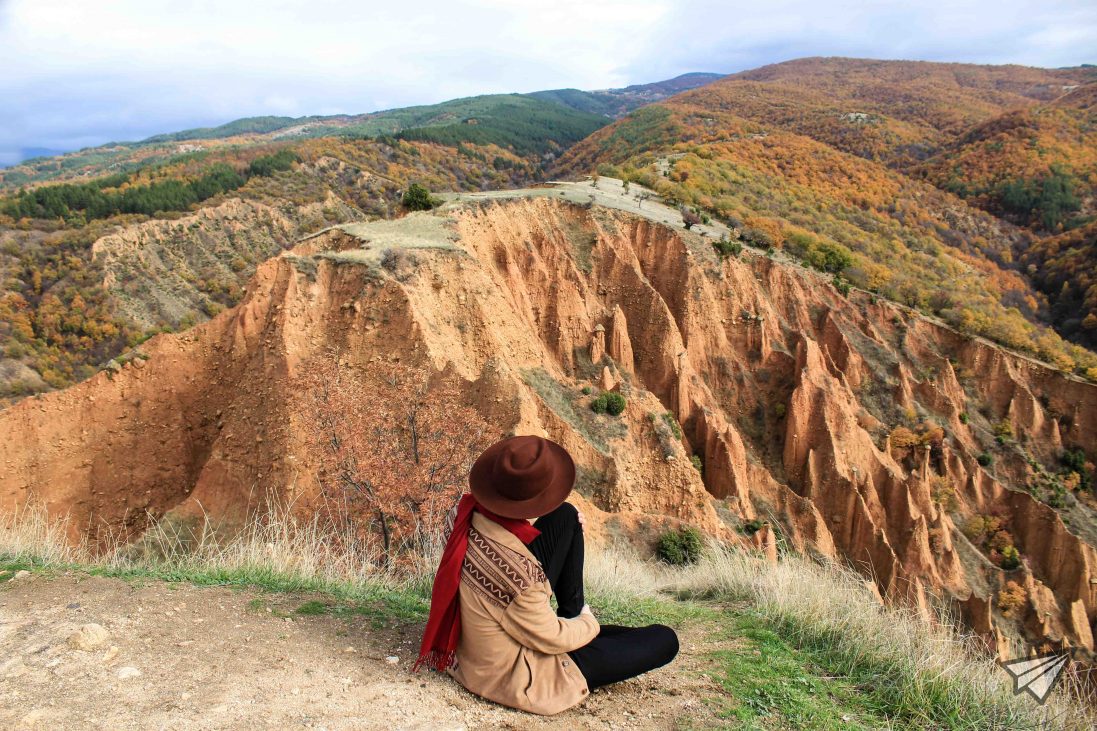 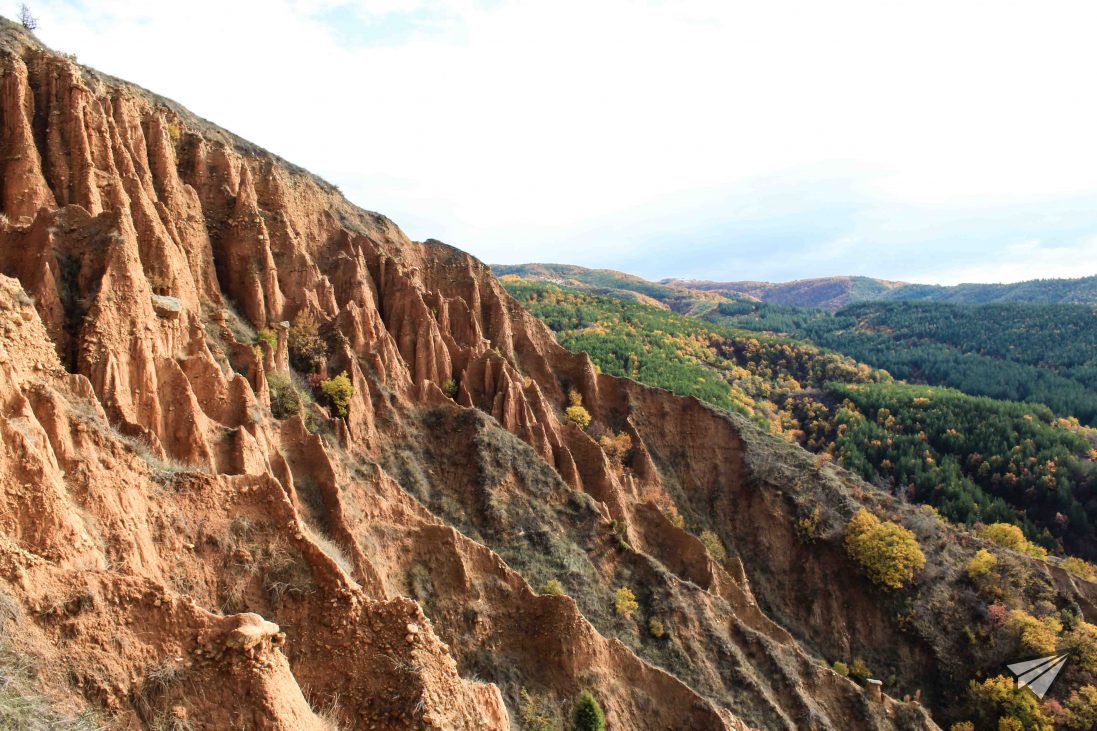 Useful information:
The distance between Sofia and the village of Stob is 107 km;
The place has a symbolic entrance fee of 2 lv;
Open every day from 09:00 – 20:00;
At the entrance of the path to the Stob pyramids, there is a wide and spacious parking lot, equipped with toilets and a place for waste; 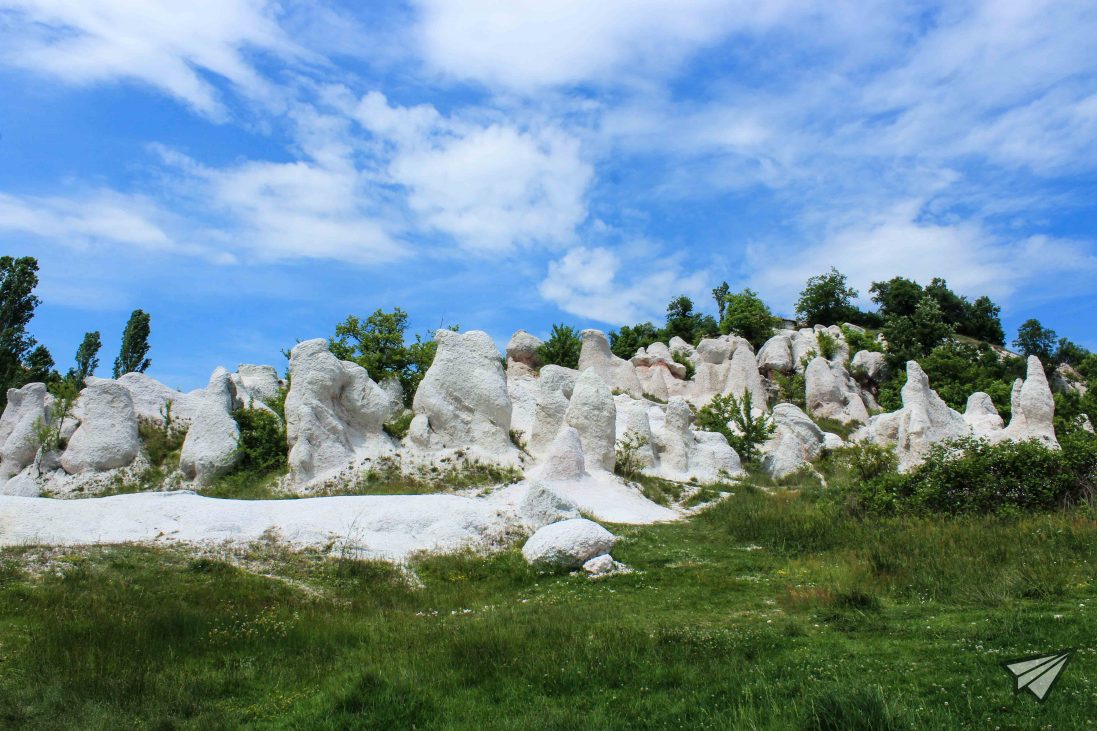 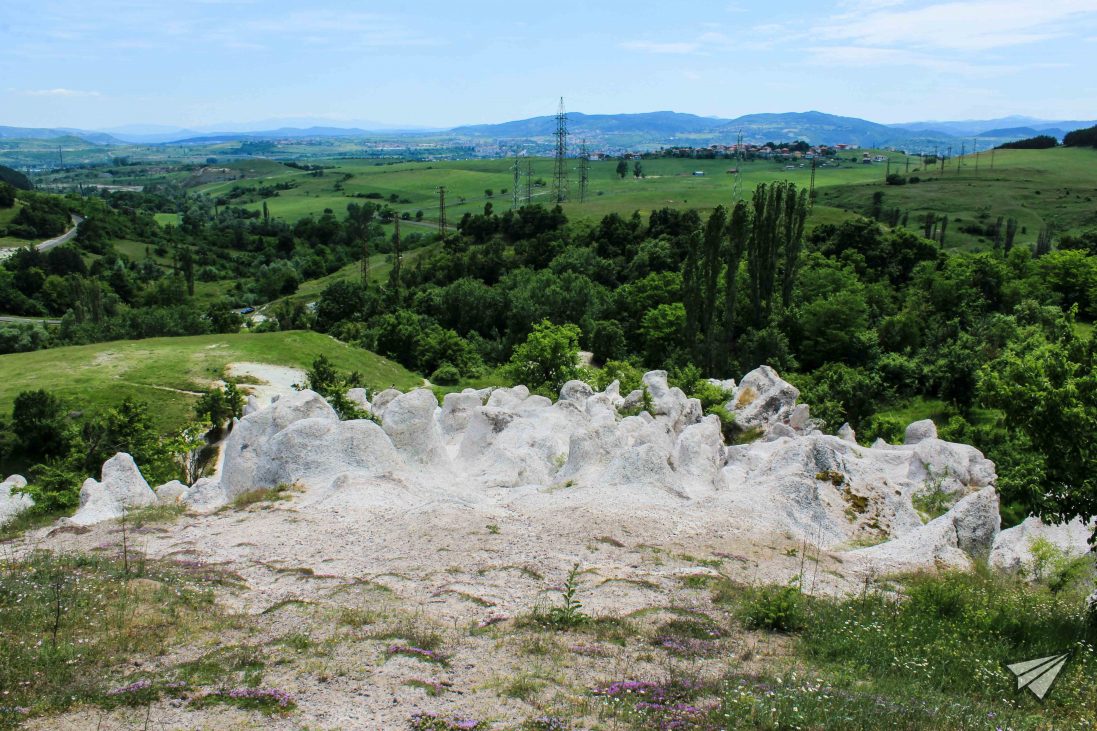 Unlike the other pyramids, the Kardzhali ones were formed as a result of the combined action of heat, cold, rain and wind on the different hardness parts of volcanic tuffs (volcanic-sedimentary rocks), which makes them easily destroyable. Their diverse colours are due to the numerous metal oxides with which they are saturated.

The most popular rock group here is the Stone Wedding, which has the most attractive shapes for people with vibrant imagination. Also, the place has a legend that says that when a wedding took place here in the past, anyone who saw the bride’s face was petrified. So during the wedding, wind blew, blew away the veil, hiding the bride’s face and all the wedding guests were petrified in an instant! 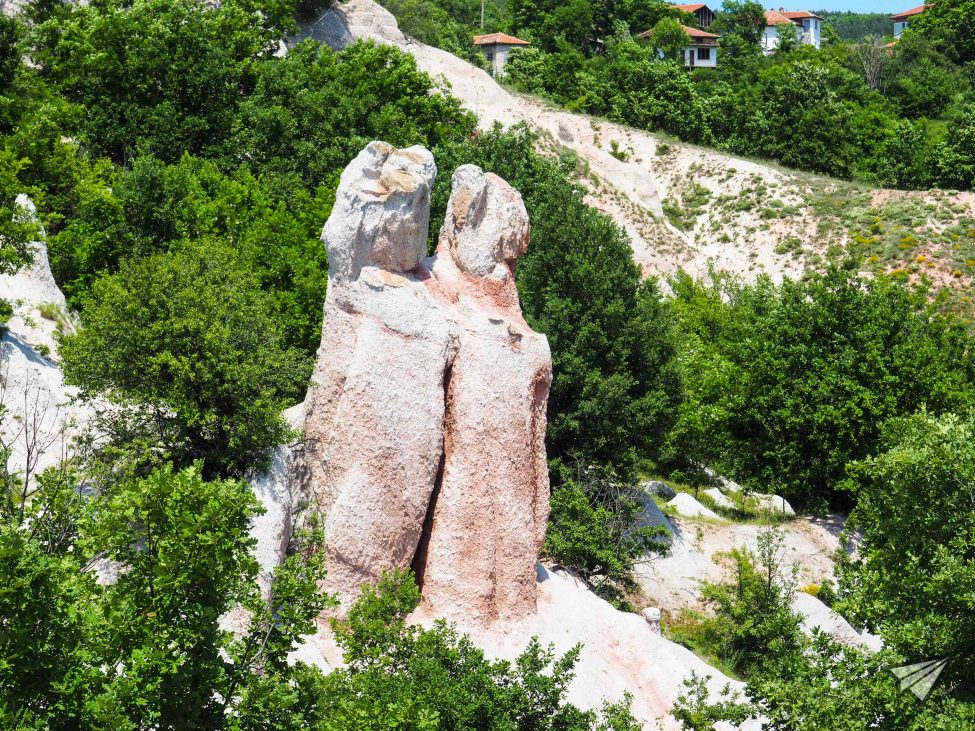 The Kardzhali pyramids were declared a natural landmark in 1974.

Useful information:
The distance between Sofia and the village of Zimzele is 282 km;
The place is easily accessible, there are marked signs and the car can be left in the marked extensions on the road next to the pyramids;

Katyn pyramids are located at the southern foot of Sofia Mountain in the Western Balkan Mountains. They are located mainly in two places on the land of the village of Katina. They are the most affected earth pyramids in Bulgaria, and in the past, they rose to an impressive height of 30 meters. 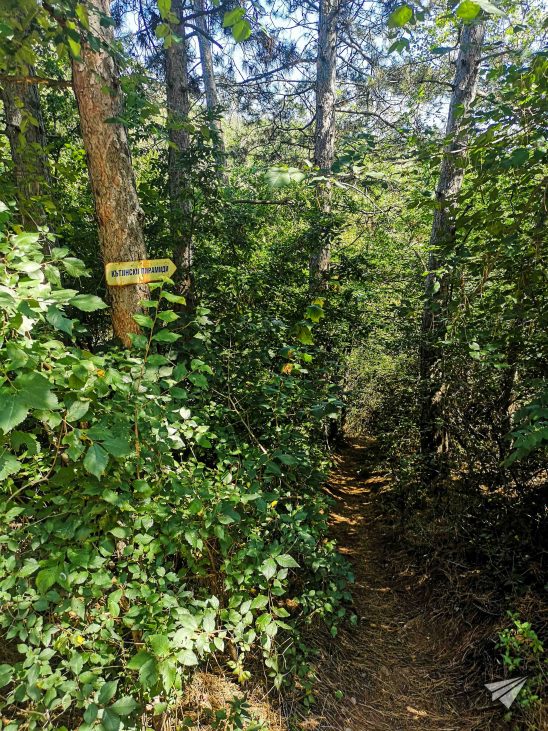 They are formed as a result of erosion in the diluvia sediments landslide by the mountain. The Katyn pyramids are erosional forms with aesthetic value, formed among weakly welded Neogene-Quaternary gravelites. The pyramids rise 5 – 10 m above the base of the valley, but the individual height of the pyramids themselves does not exceed 2 m. Their outer surface is covered with a hard clay-sandy crust. More often, it is vertically grooved and uneven due to active atmospheric erosion. 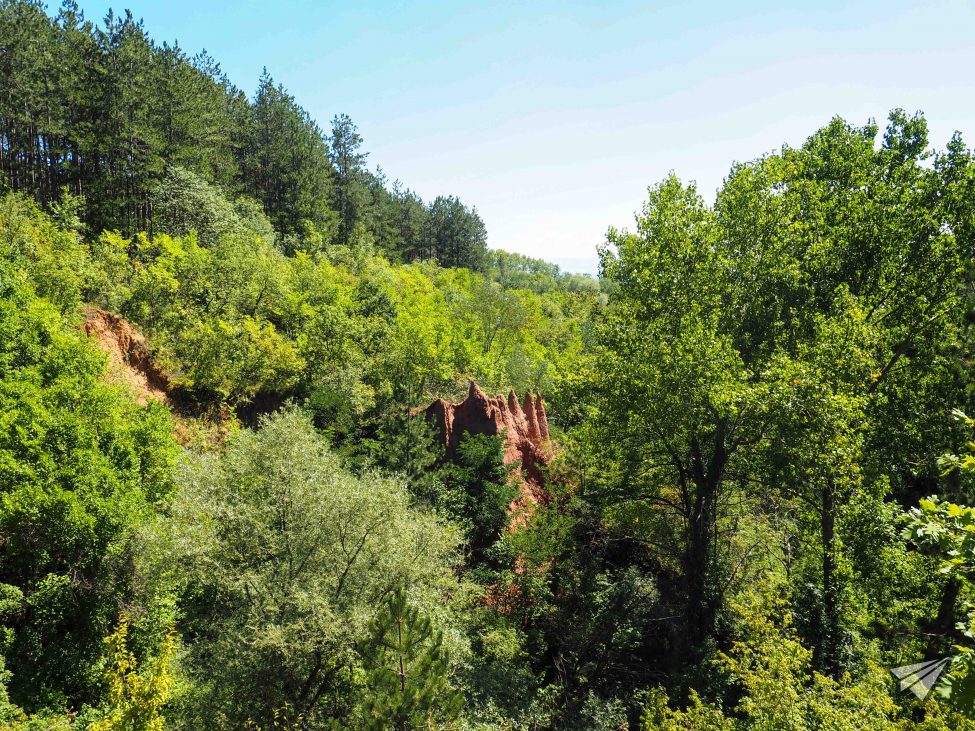 They were declared a natural landmark in 1962.

Useful information:
The distance between Sofia and Katina is 21 km;
The place is not very well managed and it can be said that it is average in terms of accessibility, there are signposts in several places;

I hope that with this post I have sparked your curiosity and proved that traveling in Bulgaria is always a good decision. Because, as Aleko said “Get to know the Motherland to love it!”.

The favorite places of the Bulgarian travel bloggers in Bulgaria 2020

Ecopath “Nagore kum slunceto” (Up to the Sun)

The favorite places of the bulgarian travel bloggers in Bulgaria 2017

Bulgaria is one of does places with rich abundance: from the rich history, through the breathtaking nature to the...

Bulgaria! One of the most heavenly pieces of land in the world! And yes, I do not overstate that statement, why?...