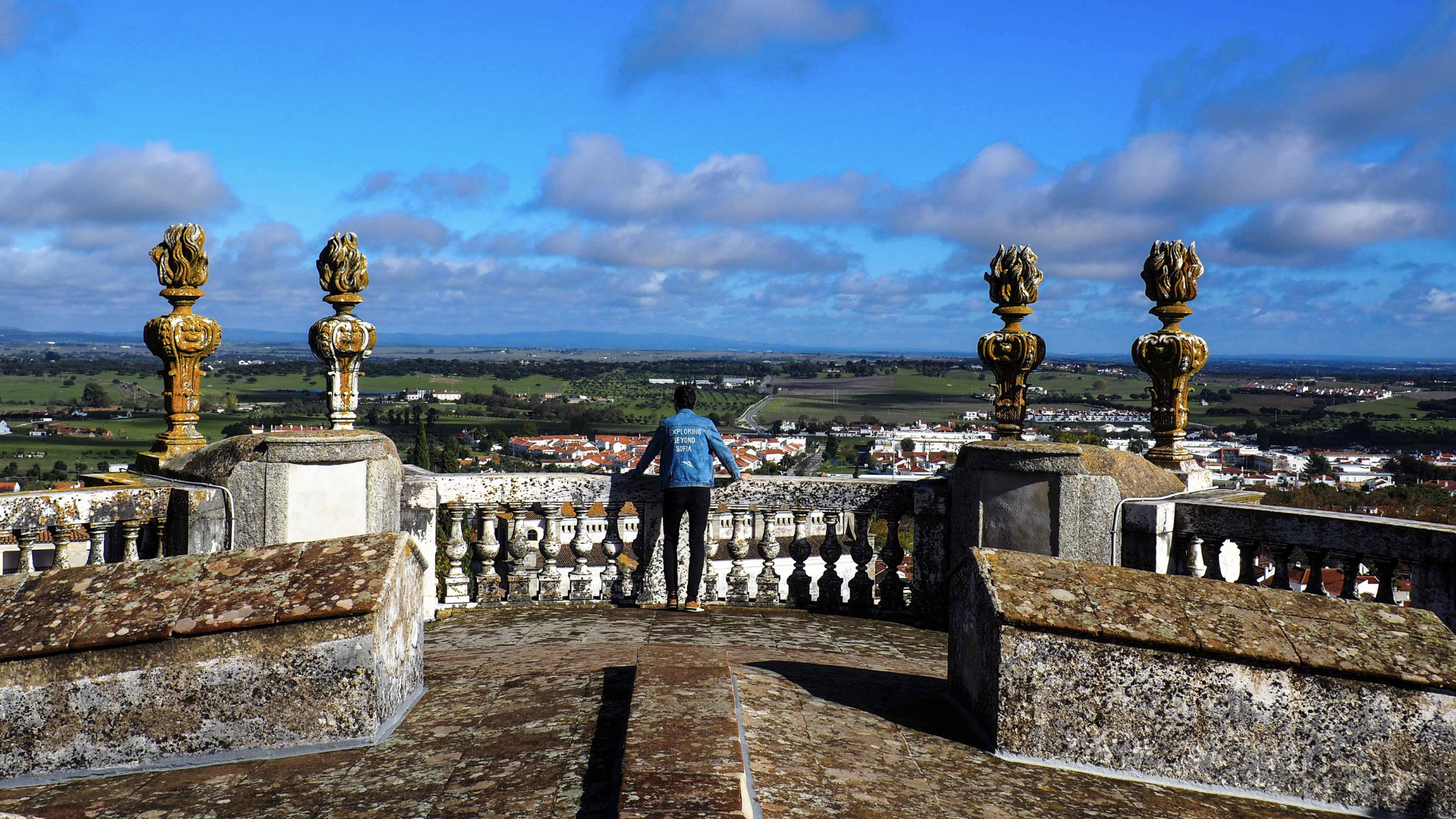 The adventure of being а Portuguese #Évora

The history of a country can be expressed through many things, but few places manage to present it to us in its most authentic form. Because in order to love a new destination or an entire country, it is important to first learn its history in order to be able to perceive its present and future. For this purpose, to understand more about Portugal, we head for a one-day trip to the historical jewel of the country – the city of Évora.

133 km southeast of Lisbon is one of the oldest and most charming settlements in the country – the city is called Évora and is part of the group of the most ancient European cities.

Évora is a city in the architecture of which you can see the imprint of every century. The range of cultural heritage here is from medieval, through local transitional to gothic and renaissance, one can find a rich variety of history, culture and sights concentrated in just a few square km. And it is no coincidence that the Portuguese refer to Évora as one of the most important historical centers in the country, and it is no coincidence that all this is under the protection of UNESCO.

Nowadays, we can safely define Evora as a rich and interesting open space museum. For the simple reason that over 4,000 monuments from different historical eras can be seen in it: churches, cathedrals, an imperial temple, a university and more. And some people even refer to the city as the Portuguese Florence. 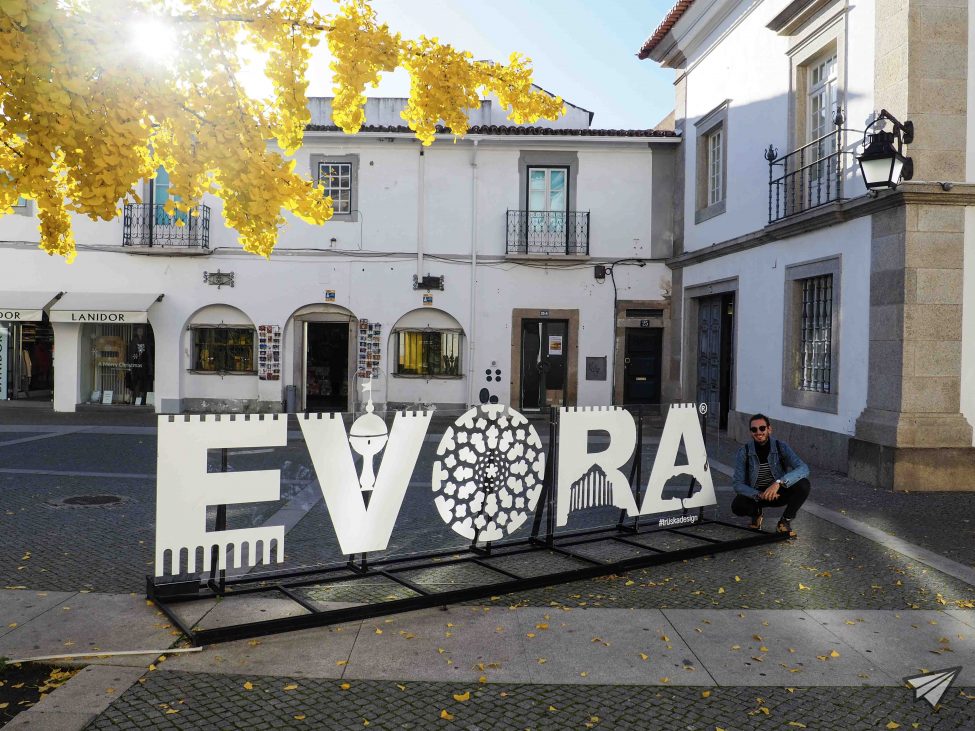 But what are my impressions of Evora and what I was able to see on my one-day adventure here, you can find out in the following lines.

Naturally, from the moment we left the station (we traveled from Lisbon by train to Évora, which takes 2 hours and costs about 40 euros round trip, a reason why this city is affordable for a one-day trip), we headed to the most famous landmark of the city, namely the “Chapel of Bones” , whose atmosphere closely resembles that of the Holy Sunday Ossuary Church in Batak. 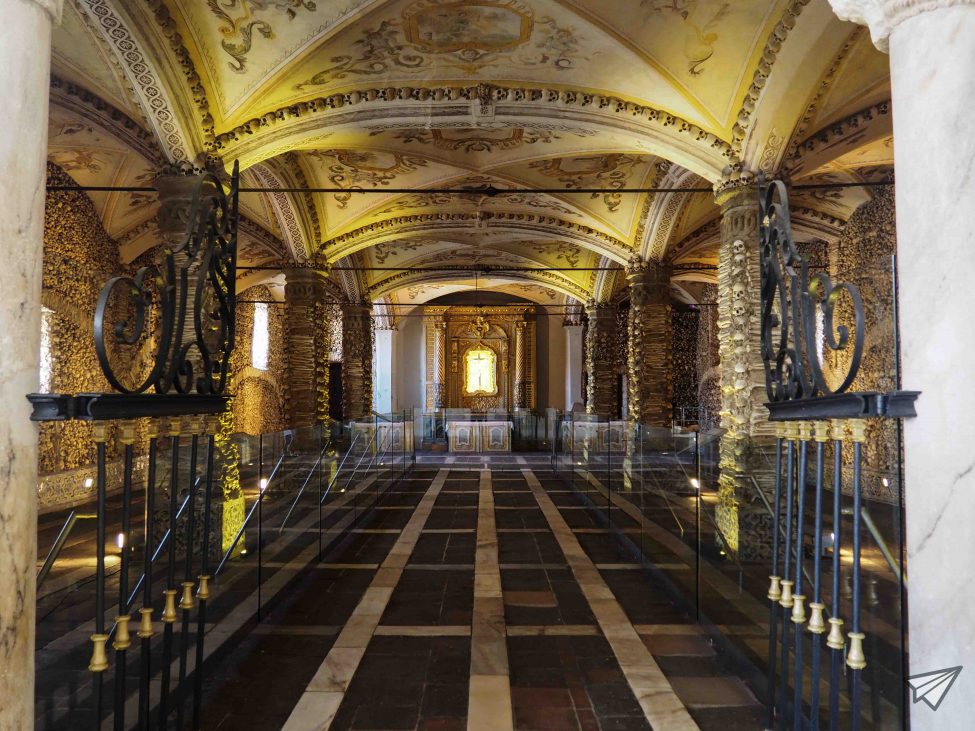 It is called the Chapel of Bones because all its elements are decorated with human remains. It was the work of monks who wanted to make people reflect on the transitory nature of life. And the inscription above the chapel “Nós ossos que aqui estamos pelos vossos esperamos.” reinforces the experience and translates as: “We, the bones here, are waiting for yours to join us.“ 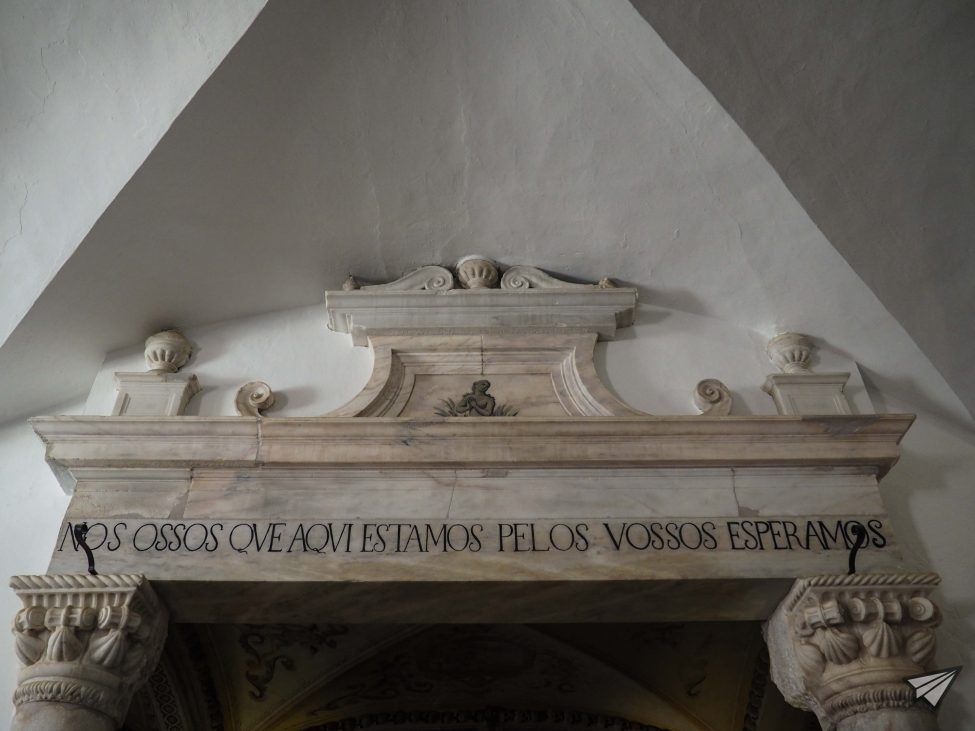 The chapel is decorated with approximately 5,000 bodies. It offers chilling views on all the walls and all 8 columns of the room which are decorated with human skulls. The bone chapel has only 3 small windows, through which minimal light enters and enhances the eerie atmosphere. And for the finale, you can see two corpses hanging on chains, an old man and a child. It should be borne in mind that this place is not for everyone – the experience itself leaves a vivid memory for visitors.

Tickets:
A normal ticket is: 4 euros
For over 65+ and students it is: 3 euros

Duration:
40 minutes with the Museum of Religious Art;

After the unforgettable experience in every sense, we headed to one of the architectural masterpieces of the city – the Cathedral of Évora.

It is a fortified church with Gothic elements, making it the largest cathedral in Portugal. Built in 1186 and consecrated in 1204, it was immediately used as one of the main temples of the Marian cult. But its completion took place only in 1250. This is a monument that demonstrates the transition from Romanesque to Gothic style with Renaissance and Baroque additions introduced later. 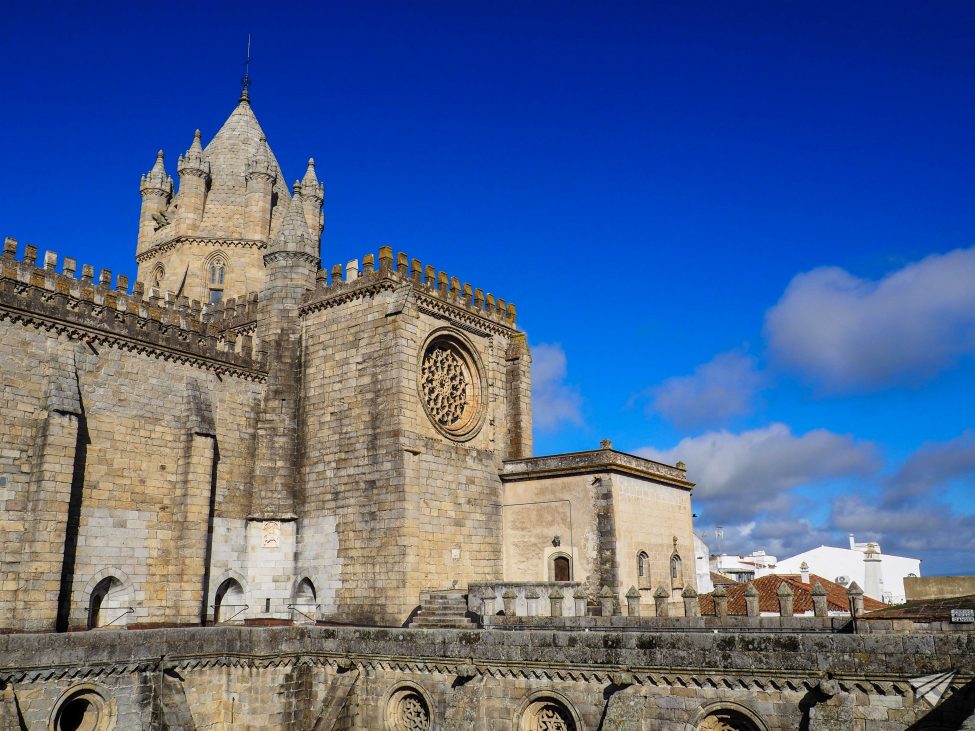 Besides the rich variety of decoration on every part of the facade and halls of the cathedral, it also includes a terrace and a museum of religious art with a rich collection in the fields of ecclesiastical vestments, painting, sculpture and jewelry. 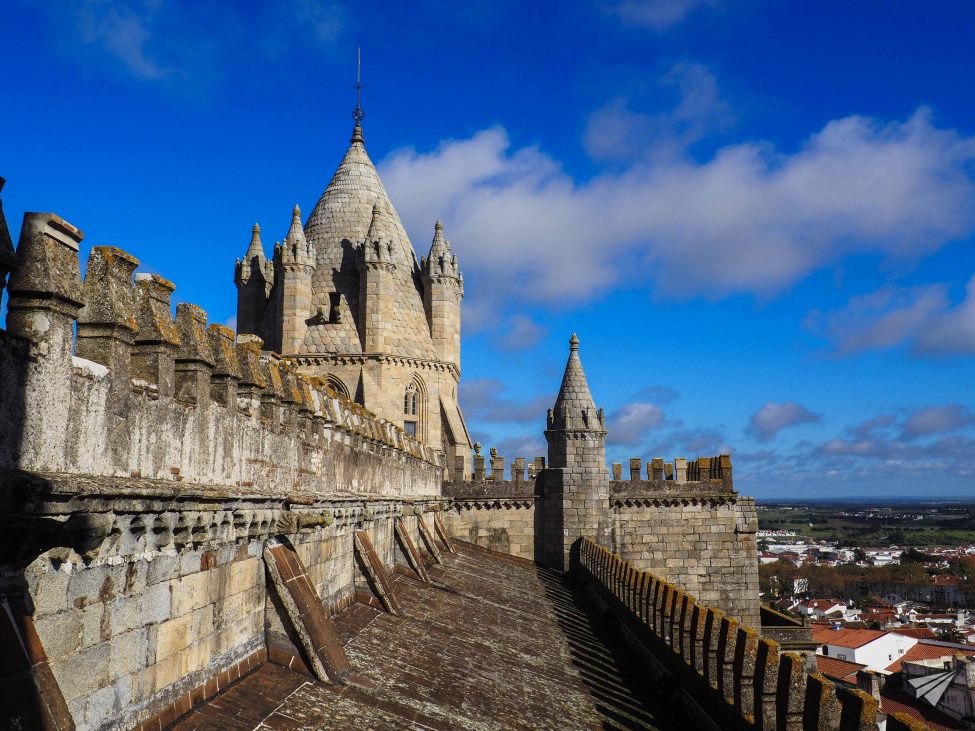 The terrace of the cathedral is the highest point of the city, from where you can see unique views of every corner of Évora. Moreover, the vast horizon encompasses the vast plains as well as the very borders of Portugal bordering Spain.

Tickets:
The ticket for the cathedral only is: 1.50 euros.

After the cathedral, we continued with the walk in Évora and reached the symbol of the city – the Roman Temple. It is one of the best preserved and most significant Roman temples on the Iberian Peninsula. That is why in 1986 it was declared a World Heritage Site by UNESCO. Evidence suggests that it was erected as part of a Roman forum to honor the emperor Augustus, who was worshiped as a god. 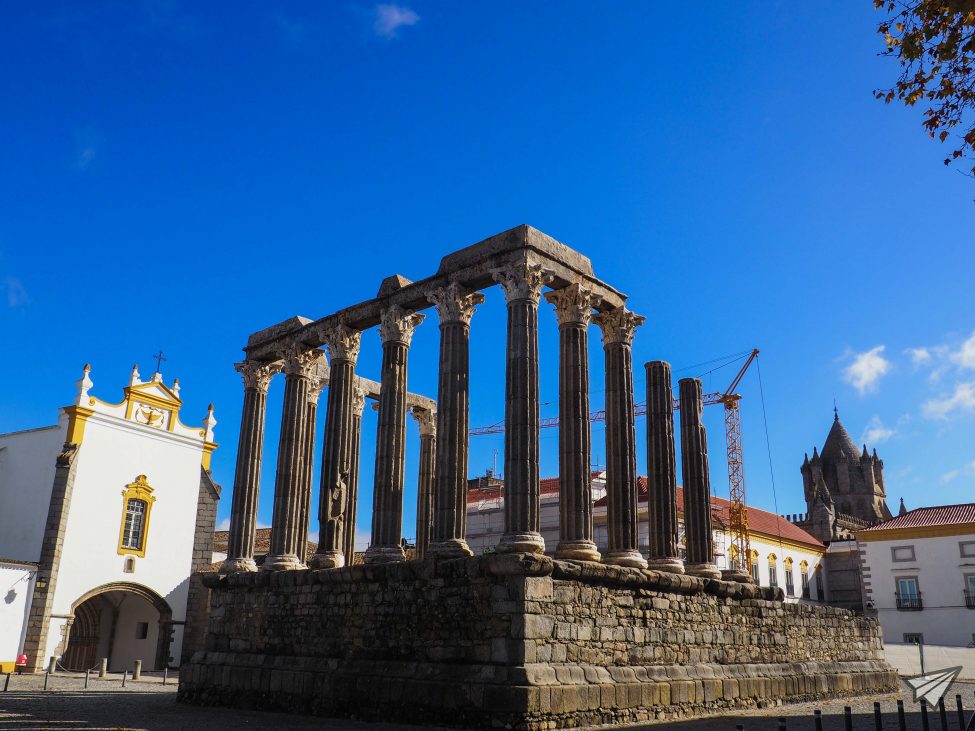 The temple has undergone many changes since its construction. In the 5th century, during the invasion of the barbarian peoples, it was partially destroyed. In the following centuries, the temple underwent several destructions and changes in terms of practical use. In the 14th century, for example, it was used as a refuge, a kind of vault of the castle of the city of Evora. Later it even served as a slaughterhouse. 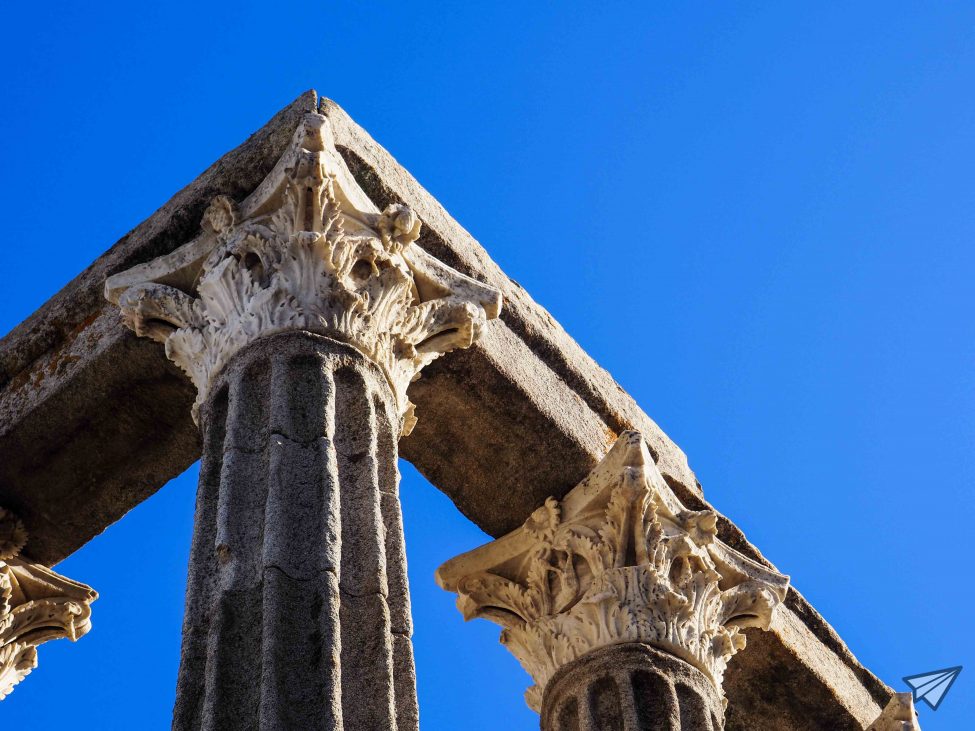 It wasn’t until the second half of the 19th century that major restorations were carried out in order to restore the original appearance of the temple. Finally, in the 20th century, with new excavations, the remains of the entire building were discovered. Despite all the modifications and destruction, the Roman temple of Évora maintains its original plan to this day. This majestic monument has a rectangular shape. The base, made of large granite blocks and about 3.5 m high, is almost intact. There are still 14 original columns above the base of the Roman temple. Many of them still have their capitals made of white marble from the neighboring town of Estremos. The floor, once covered with mosaics, is completely missing. 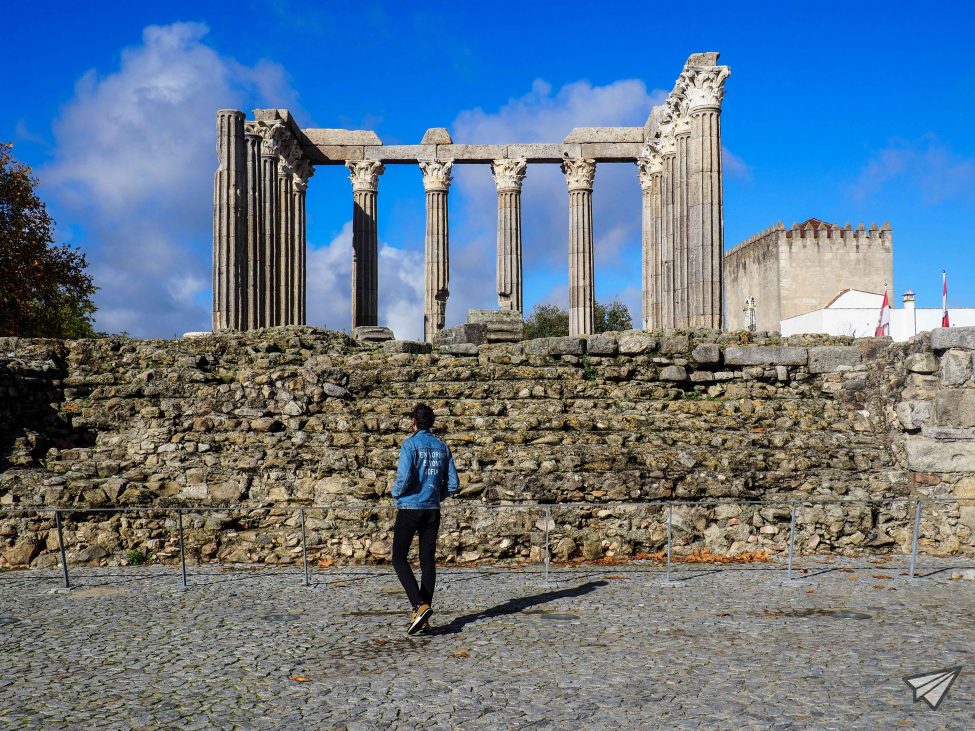 Our tour ended by visiting the University of Évora. It is the second oldest university in Portugal after Coimbra. Founded on November 1, 1559, it was initially run by the Society of Jesus, and was subsequently closed by order of the Marquis of Pombal (Portugal’s first minister) in 1759, when the Jesuits were expelled. 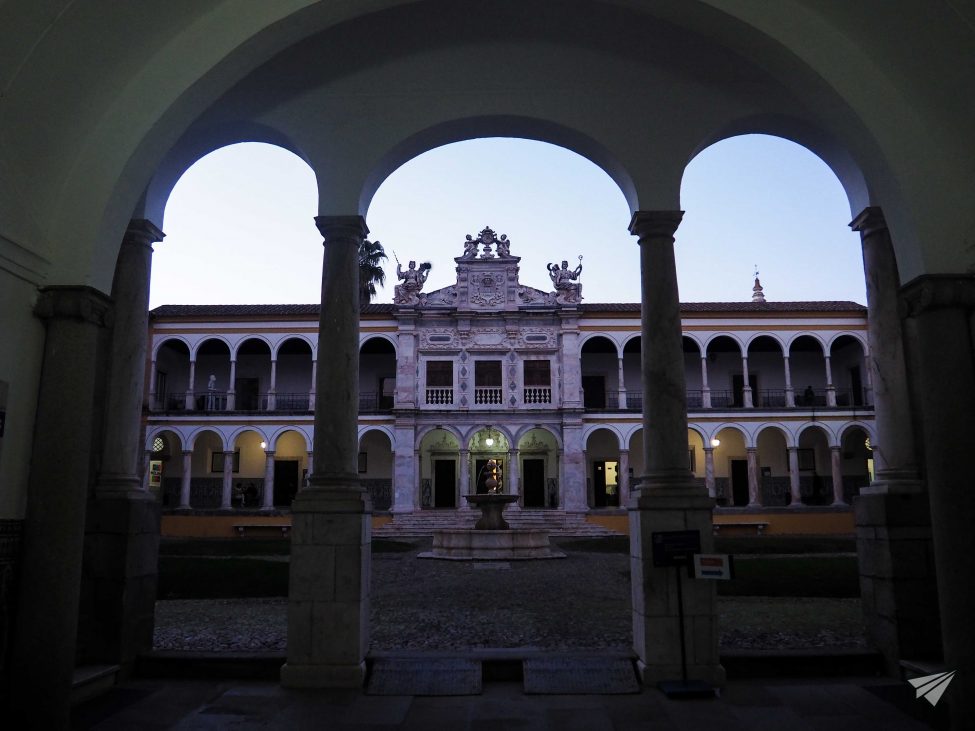 Over time, the building was used as the National High School of Évora, but it was not until 1979 that the University of Évora became a higher education institution again. Today, the university is one of the points for the development of the city. You can enter it as a tourist for a nominal fee and walk through the old corridors steeped in science and history.

That’s how it ended our one-day and – to be honest a bit impromptu – adventure in the city of Évora. The truth is that we went with no expectations, but we were deeply fascinated by the rich and important history that echoed through the ancient city and taught us fundamental facts not only about the city, but about the entire country. Évora is a city that should not be underestimated, on the contrary – it should be one of the must-see destinations for anyone visiting Portugal.

Coimbra - a lesson of love and tradition

Repeat after me: Lisbon is always a good idea One

Some equations are much easier than others. 🧡

Welcome to the Azores, the very end of Europe 🏝

Turkey kinda suits me 🧐 Brb, preparing for my

My face at the end is everything 🥴 The locatio

Abracadabra the tree made a hole! 🪄 The cave w

The adventure of being a Portuguese #Azores 1 If anyone had ever told me that one day I would go to the Azores, I...