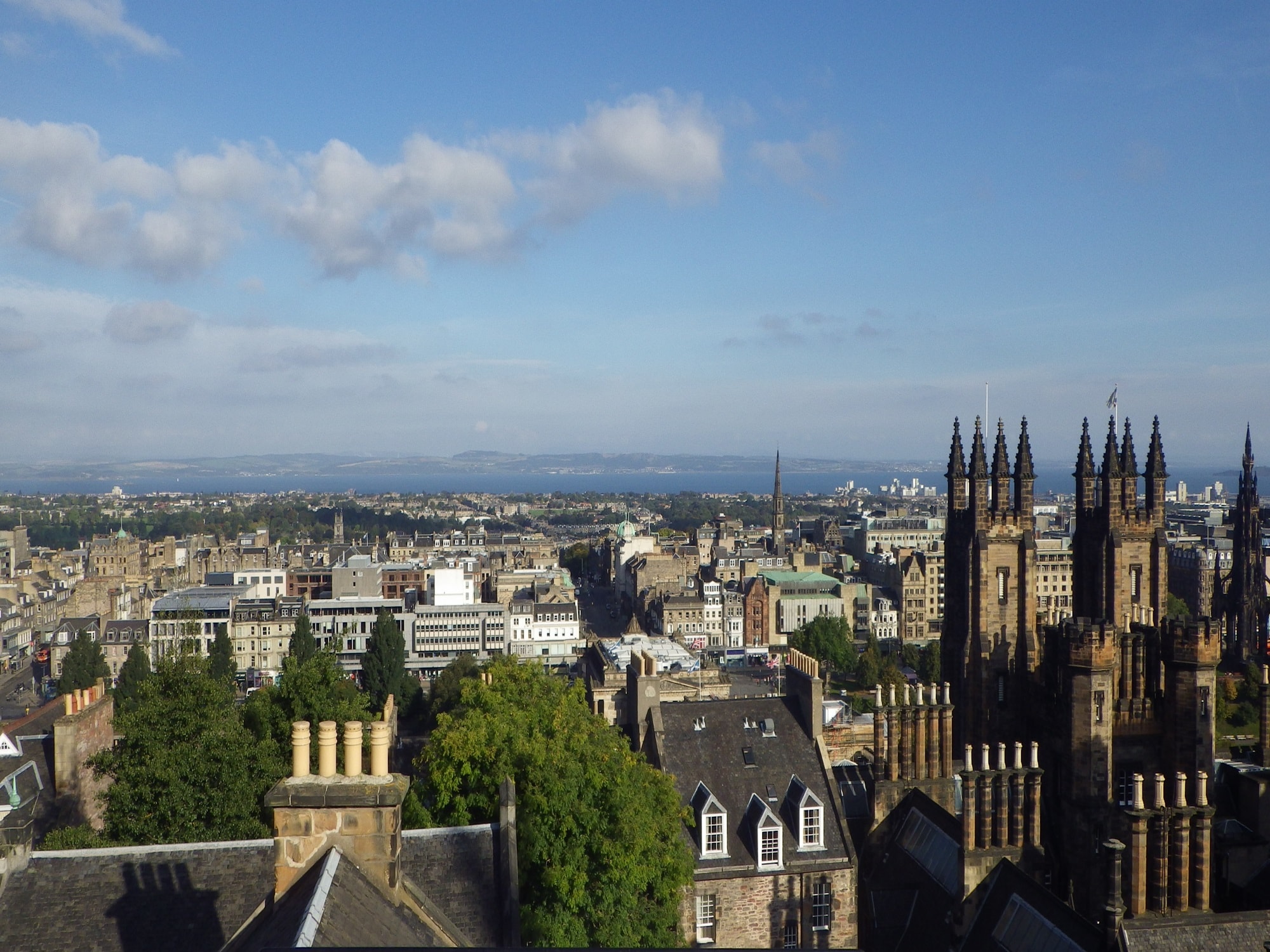 Edinburgh, the capital of Scotland. It is also recognized as the most English – looking part of Scotland, (still) in the United Kingdom.
I have spent the last 4 years (September 2012 – June 2016) in this very touristy but also beautiful and fairy – like town. Located in the Southern part of Scotland the capital has outstanding architecture, especially in the central historical area. For me this was also a place for discovering new worlds, providing us with opportunities and new realms of knowledge. Spending hours at the university library and on campus I still had some time for occasional walks around. It was most often time spend with lovely visitors I had who were turning around the otherwise monotonous student everyday life. 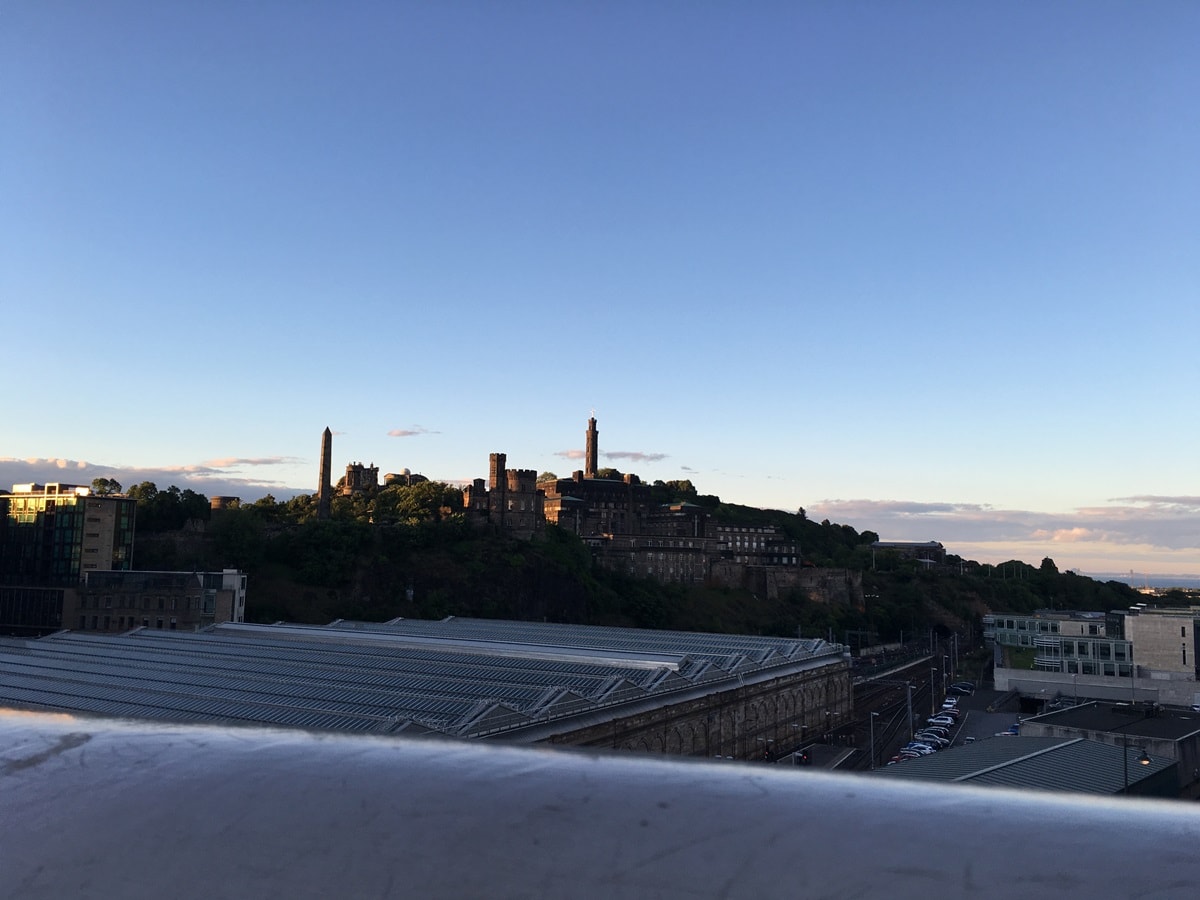 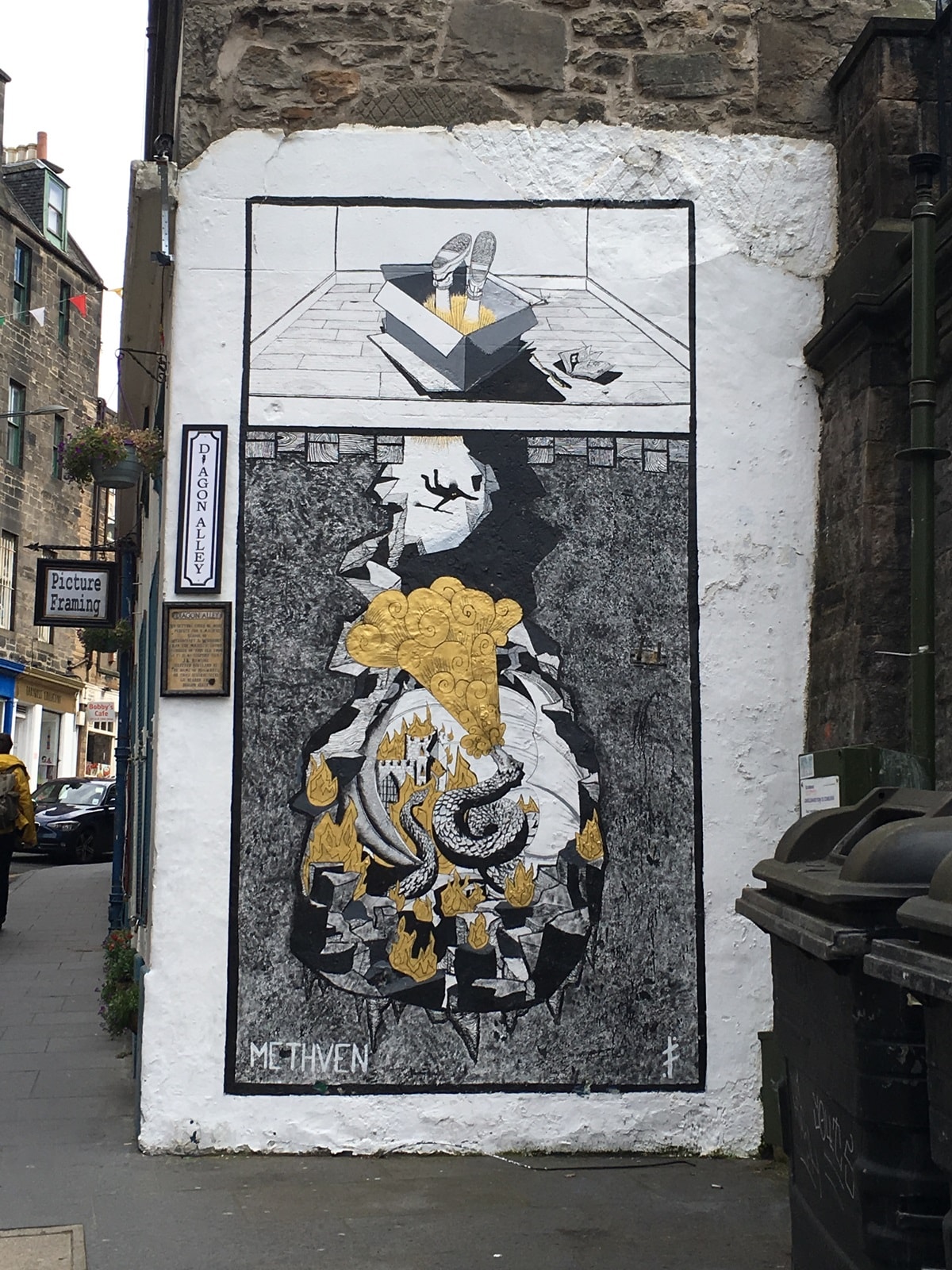 According to stereotypical British manner I would begin with the weather conditions in Edinburgh. No doubts, not as Northern as other parts of Scotland, but still Edinburgh weather stands out with chilly air, wind blows and tiny cold rain drops. This is what the weather looks like throughout most part of the year – from September until April. The summer is not the warmest you can imagine but you can still get lucky with a few sunny days. If you are planning you trip in advance and would like some slightly better weather probably the moths of June, July and August are a better idea. However, December in Edinburgh is truly magical, as it will be mentioned later on. 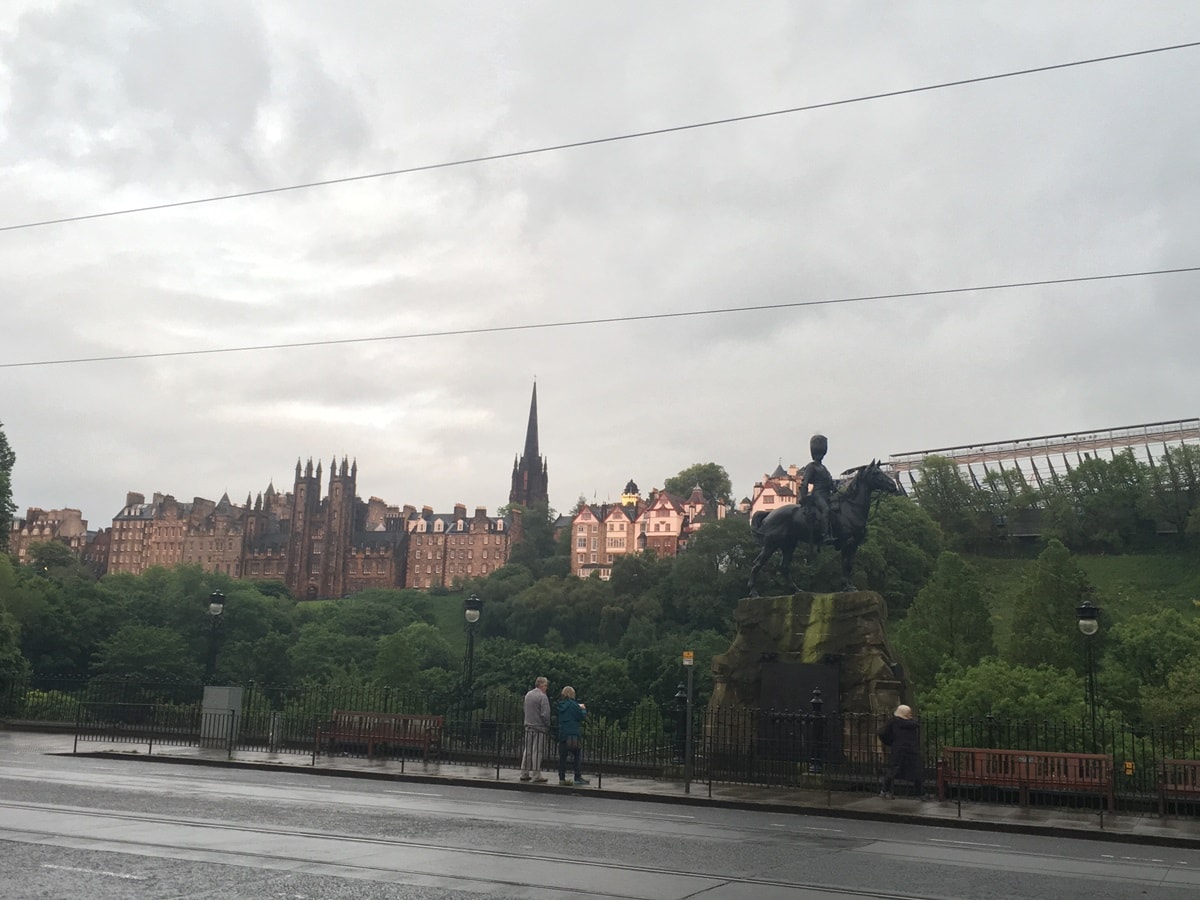 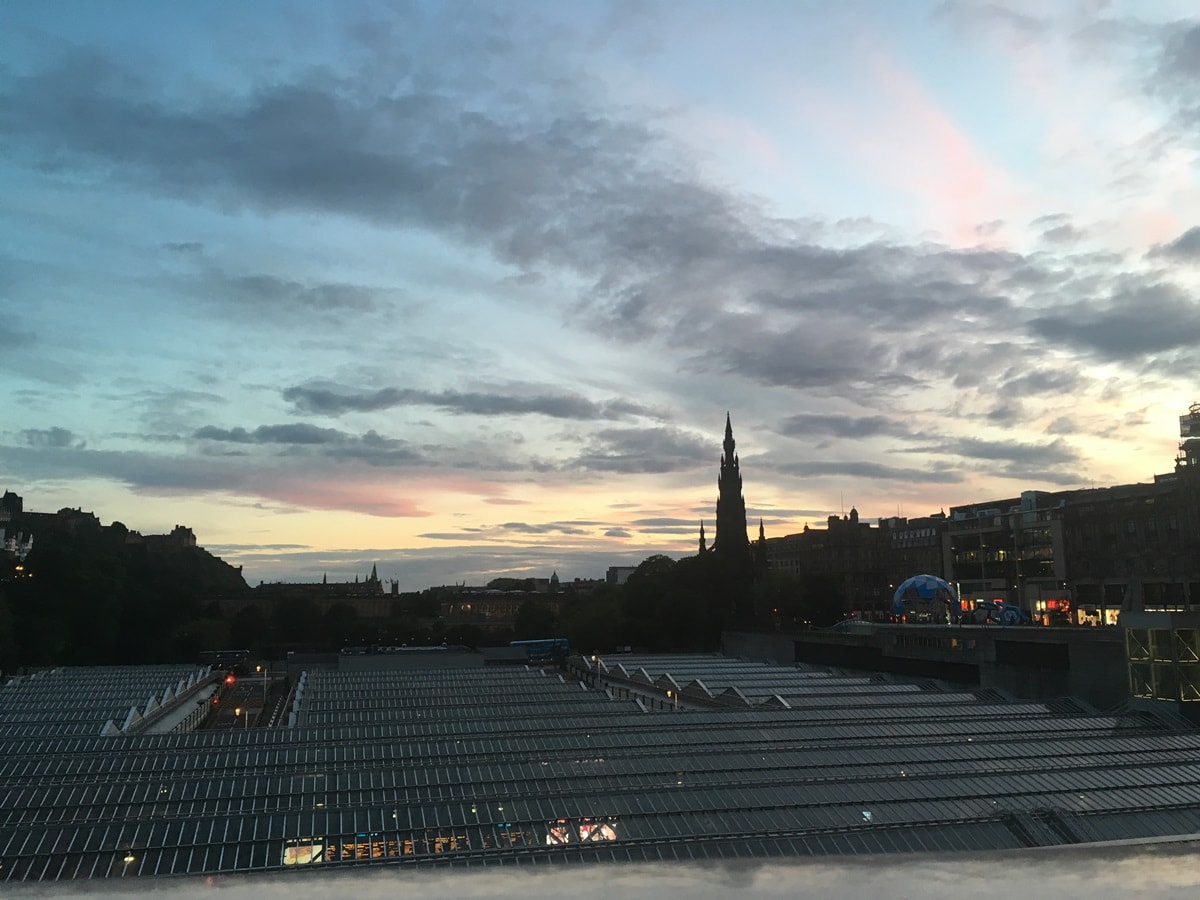 Edinburgh is situated on the sea coast (Portobello beach is around 40 min away from the centre by bus) but the feeling you get in the central area is for a more landlocked location. While walking on Royal mile (the main street in Old Town, connecting Edinburgh castle and the residency of the British monarch – Holyrood palace) you can get a glance of the sea at the bottom of the street which will remind you that you are actually on an island. 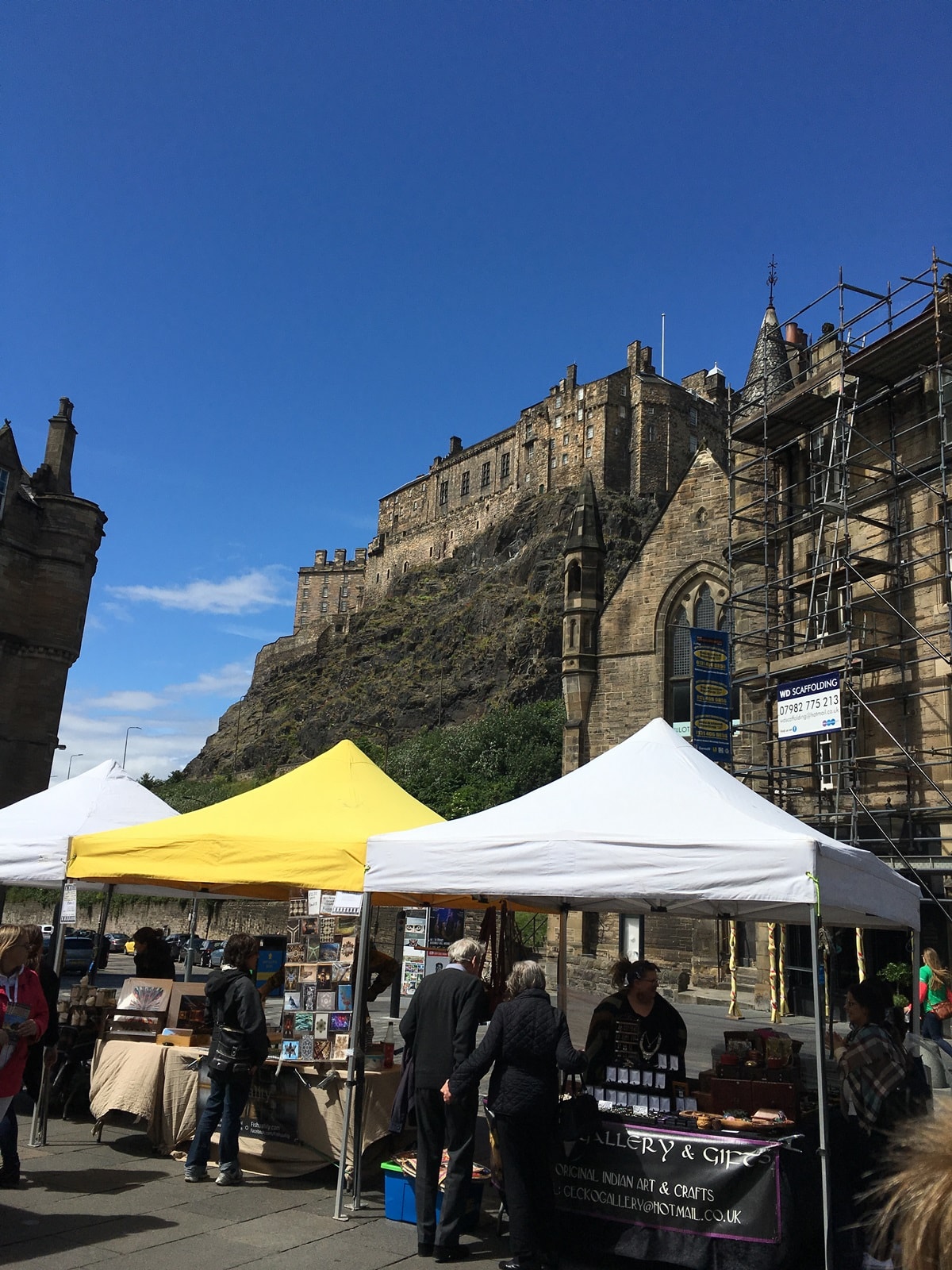 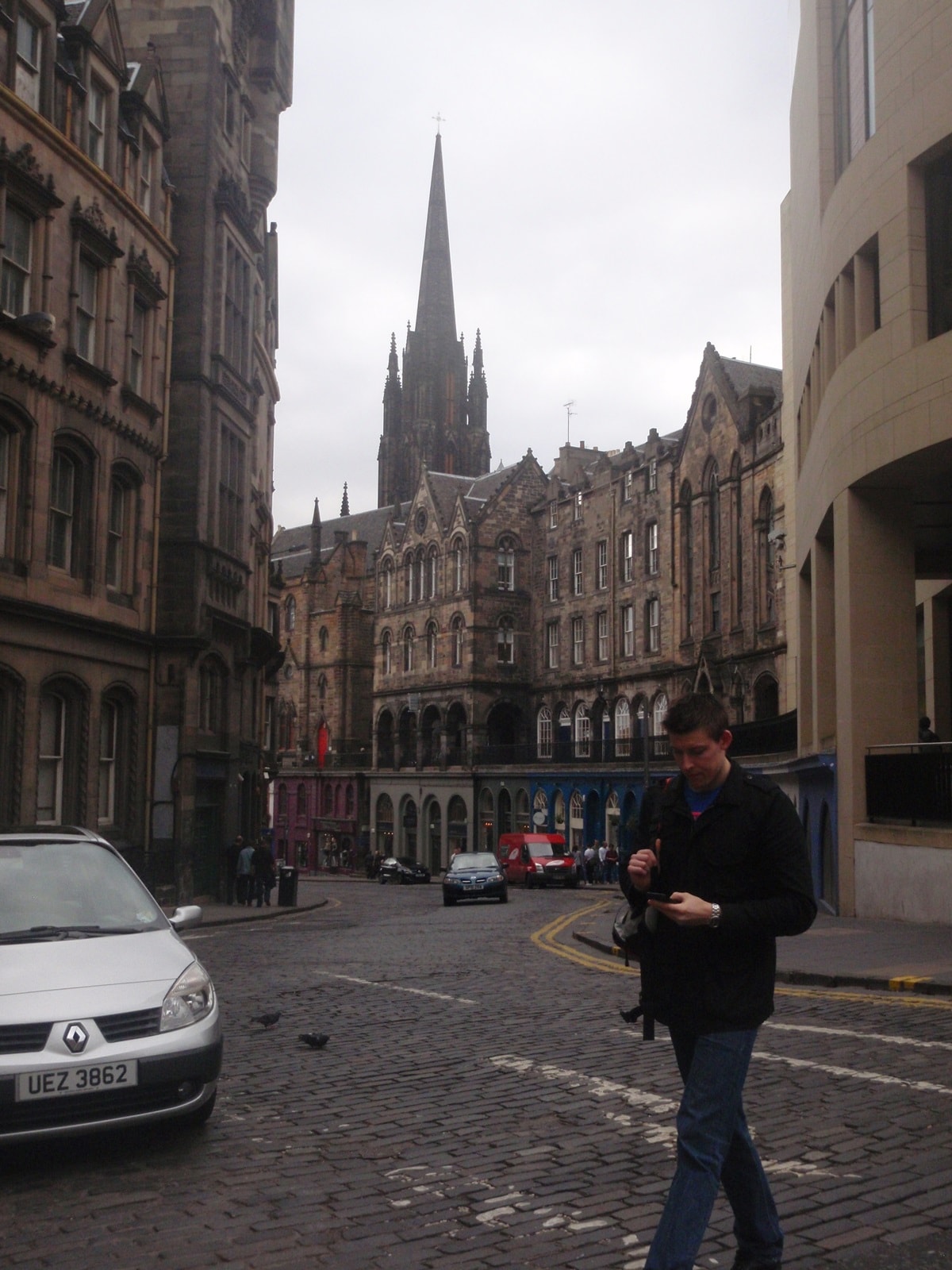 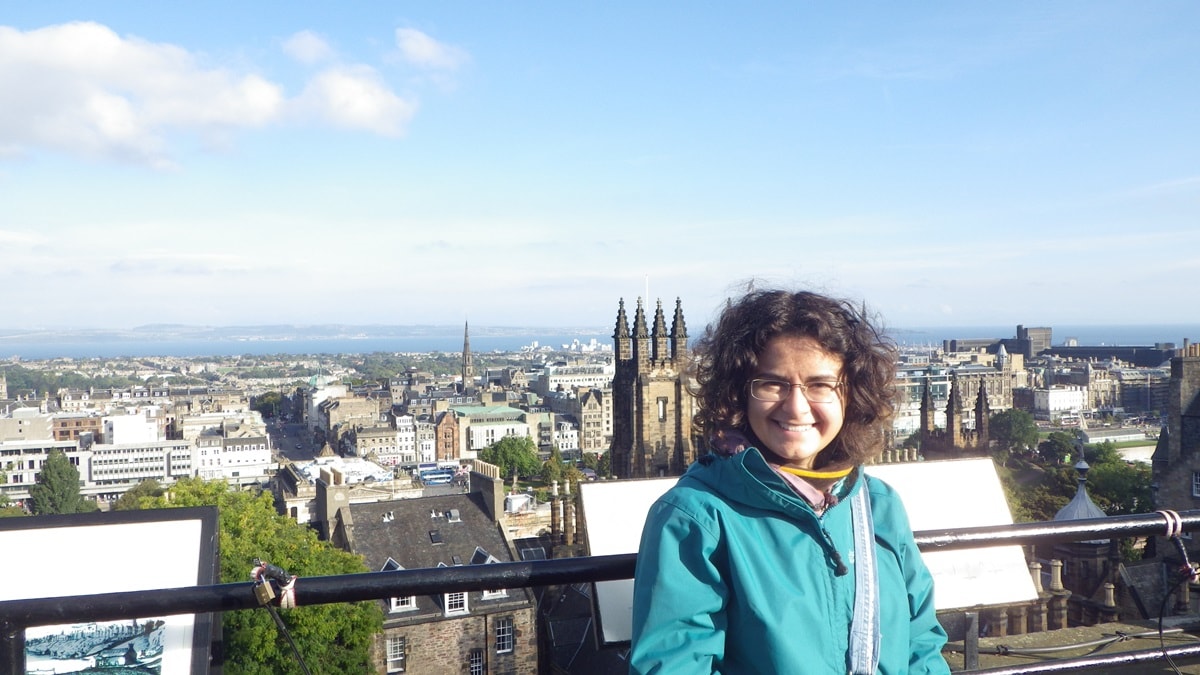 Mentioning the castle and the palace they are good starting points as main tourist attractions in town. Nowadays Edinburgh castle is turned into a military museum, located on one of the main hills. It also gives the beginning of the Royal mile. If you are enthusiastic about visiting historical building and museums the castle will offer you a very rich history but it is far from the turgid style of other European UK castles. Even if you only visit the esplanade in front of the castle – it’s worth it. In August on the esplanade is conducted the so called Military Tattoo festival in which different military orchestras take part. At the bottom of Royal mile is Holyrood palace or the Scottish residency of the British monarch. During the months when Her Majesty is not in the palace (most time of the year) it works as a museum and gallery and you can visit the rooms which are still in use. If you turn out to be lucky enough you can also get to see one of the royal visits usually accompanied by a procession along Royal mile. At the end of June – beginning of July the Queen organizes annual garden party, taking place at the Holyrood gardens, which is attended mainly by people from the Scottish elite. Opposite the palace, ironically, is situated the Scottish parliament – symbol of the (still) partial independence of Scotland. It is opened to the wider public and you can even visit a session if you book your spot in advance through the parliament’s web page.
Along the Royal mile you can also find a few other museums which might be interesting for a visit – Camera obscura – the world of illusions, The whisky museum, The museum of Edinburgh (free entrance with interesting little exposition), Museum of poets and The house of books where there are weekly events which can be either free or with low entrance fee. The town is separated in two parts – Old Town and New Town. Apart from Royal mile, in the new central part is Princess street where are situated Waverley station (train station) and St. Andrews square where is the bus station. Princess street is also main location for people who are willing to go shopping in Edinburgh. Furthermore, here are located Princess street gardens used by people to enjoy the sun when it’s possible according to the Scottish standards. On Princess street is also located the National gallery of Scotland, free of charge, excluding the special temporary exhibitions. It is impossible to miss the tower which honors Scottish artists and it’s called Scott monument. If you are up for it you can enjoy the view over Edinburgh, climbing to the top of the monument. If you are a fan of nice views you can also visit two places which can be sometimes neglected by tourists – Arthur’s seat and Calton hill. The first one is a geological structure which is even believed to have inspired the nowadays science of geology and the work of James Hutton on the theory on Earth layers and the age of planet Earth. At present visiting Arthur’s seat is still part of the geology courses at the university. Calton hill, on the other hand, has a more historical significance, becoming famous because of the observatory on top of it and the unfinished Northern version of the Athens’ Parthenon. Both hills are a good walking option adding on the benefits of an amazing view, especially for days with bright weather and clear skies. 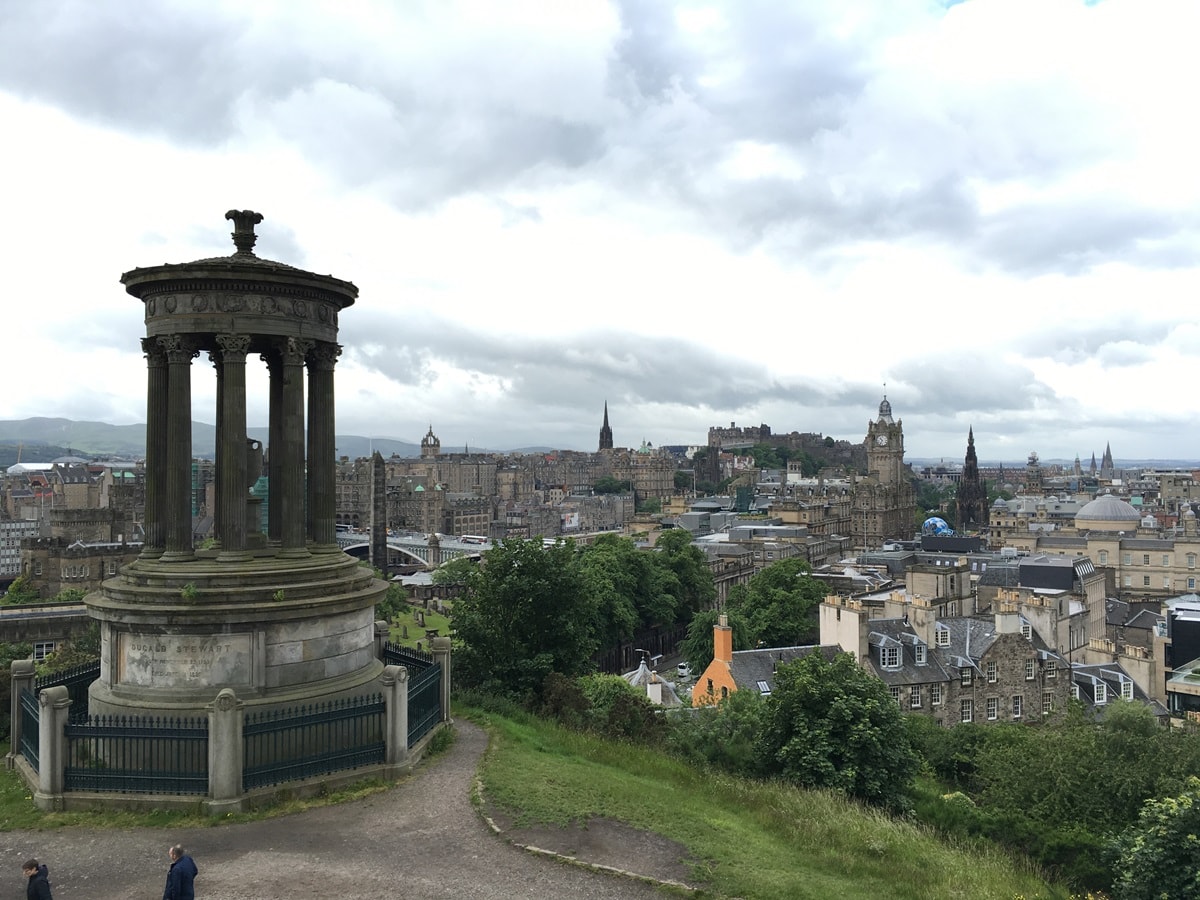 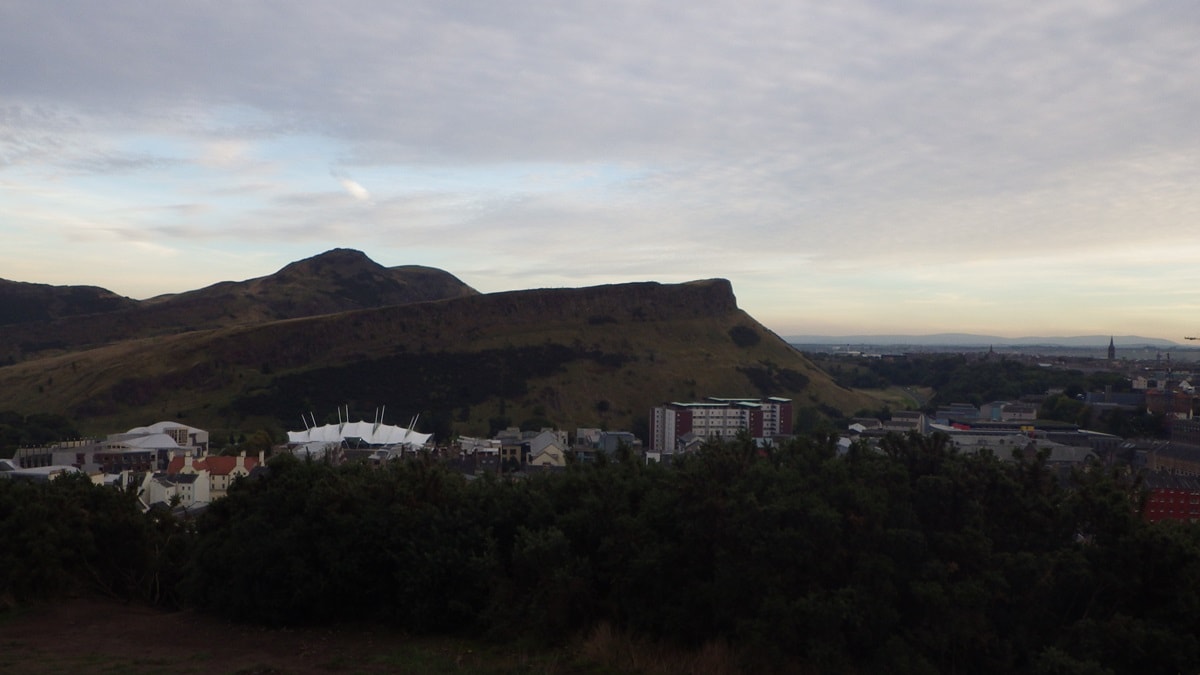 Two other places which are worth the visit, especially if you have a few additional days to spend in Edinburgh, are the Royal Botanic Garden and the Zoo. The botanic garden presents a very rich and diverse collection of plant species, including special areas which are replicating the climate conditions under which the plants grow and develop. One such example is the tropical forest house which creates conditions identical to the temperature and humidity of the Malaysian tropical forest. Steppe plants, desert plants, coniferous plants, climbing plants, blossoming trees, fruit trees, herbs are only a tiny part of all the diversity which you can discover in the garden. It is a very nice place for calm and recharging walk. The zoo might be of interest especially to people with young children or lovers of the animal world. The garden is very specious which gives you a sense of freedom of movement. Biggest honor of the zoo are the two Chinese pandas which are the only representatives of the species in a British zoo. Other very impressive representatives are the chimpanzees – some of them born and raised in Edinburgh zoo. The Zoo is also active participant in scientific research which works on the preservation of the natural habitat of the chimpanzees in Central Africa. 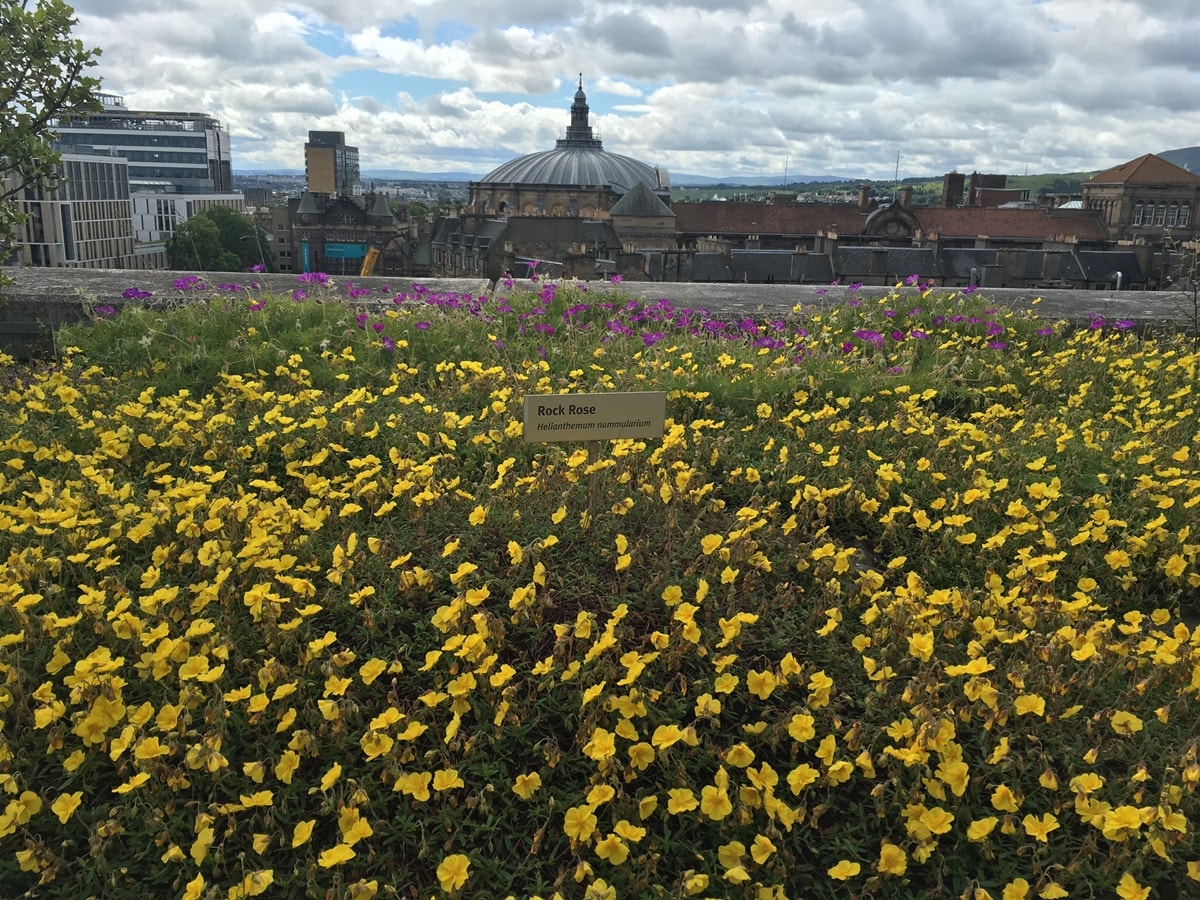 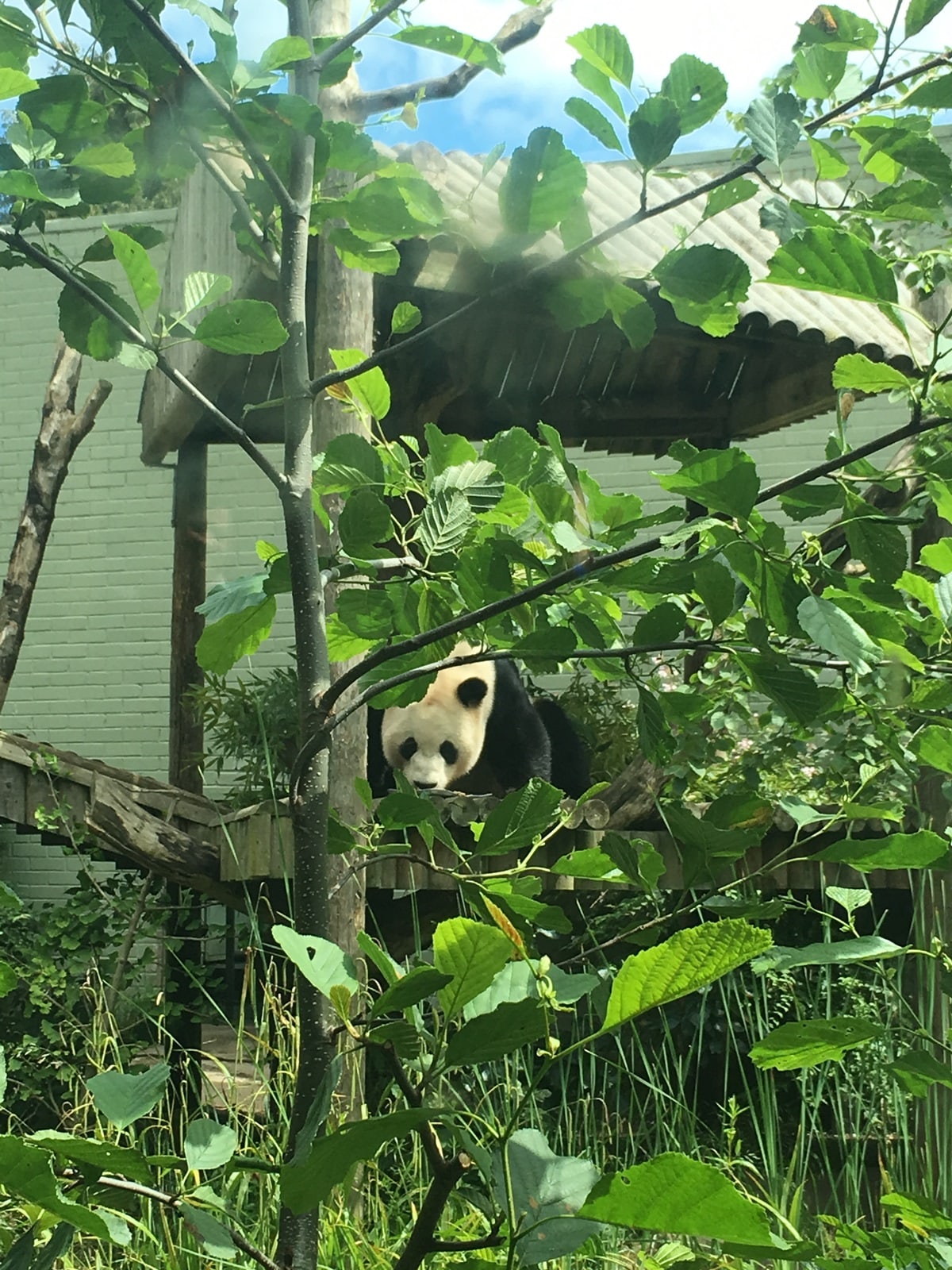 For those of your who are museum lovers the National museum of Scotland, not far away from Royal mile, offers a lavish exhibition which is combination of history and natural history. The museum can be separated in three topical sections – history of Scotland, Natural History and Anthropology. All three of them are very well arranged and offer interesting artefacts. The museum can also play the role of shelter on a rainy afternoon, it’s free admission so you can split your visit between a few days. If the weather is nice don’t miss the opportunity to visit the panorama terrace on top of the history of Scotland section. 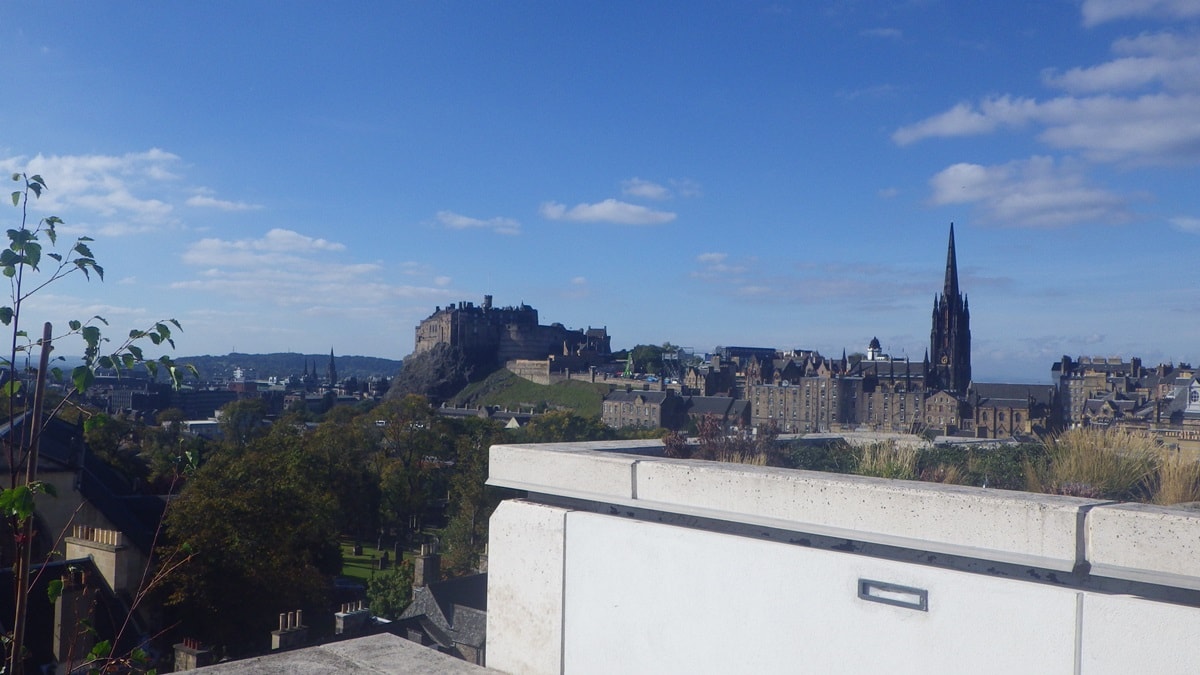 Another royal sightseeing which you can visit in Edinburgh is the Royal Yacht Britannia which was used during Her Majesty’s annual visits to the Commonwealth countries. Nowadays it is turned into a museum and you can explore every bit of it – bedrooms, the staff’s cabins, the official dining room, the medical room, the bar where sailors were gathering. In order to reach the yacht you have to pass through a shopping center called Ocean terminal – go to the top floor and you will have access to Britannia’s main entrance. Bare in mind that during winter months the last group of visitors can enter around 4 pm so if you are planning to visit Britannia better be earlier in the day. You can easily reach Ocean terminal with bus number 35 which is passing through central Edinburgh. Tickets are sold by the driver. The streets of Edinburgh are rich in history. However, there are two places which are quite famous amongst tourists. One of them is the terrier Bobby who was staying at his owner’s grave for over 14 years, nowadays there is a statue of the faithful dog. 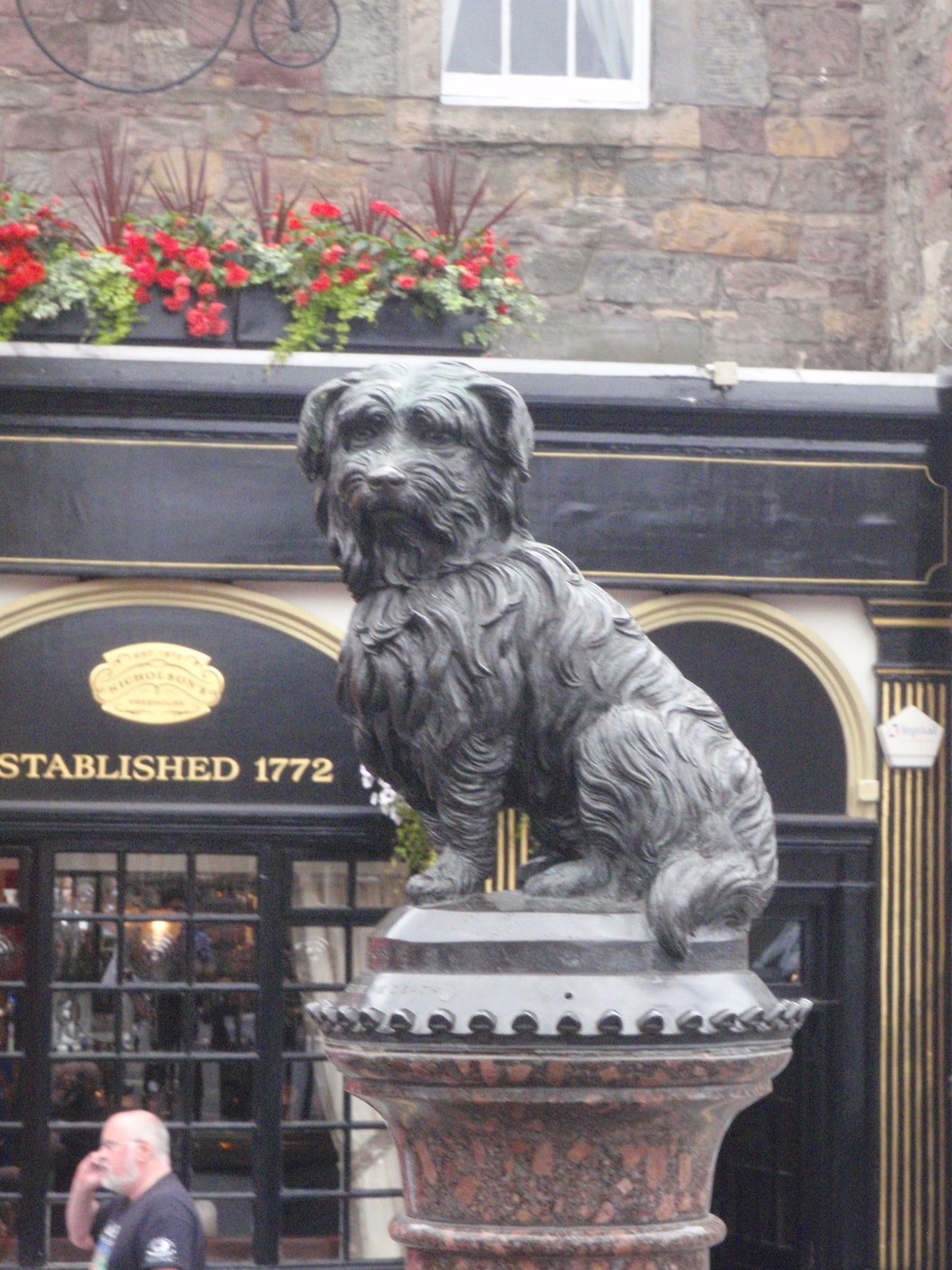 Another interesting spot to visit, especially for those Harry Potter fans among you, is the Greyfriars Kirkyard, where you can find tomb stones with the names of Harry Potter’s main characters. Nearby is also Elephant house coffee shop which is believed to be the place where Rowling started writing her books for the young magician. The coffee shop itself is reasonably priced but the waiting queue can be extended way outside the entrance. 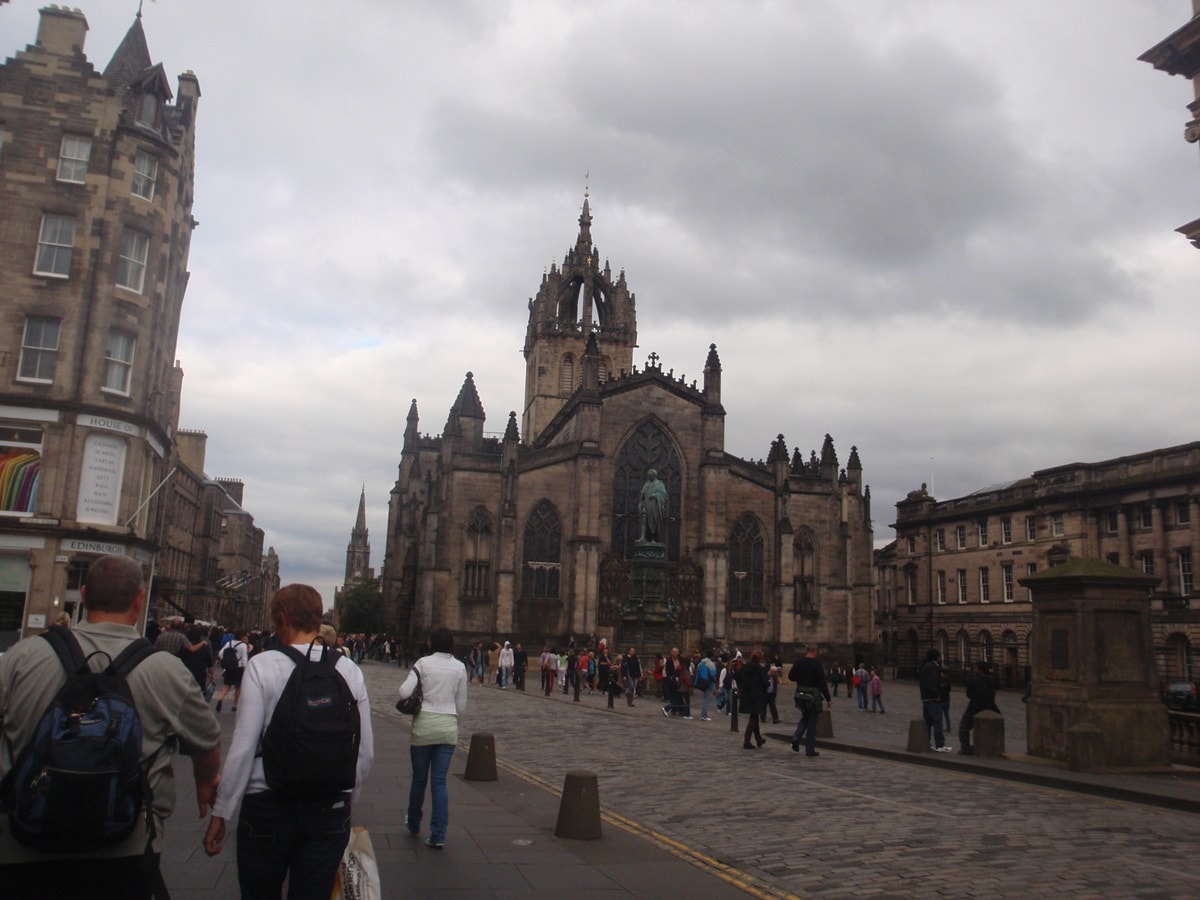 However, if you have patience to wait the view from the coffee shop is also worth it. You will easily recognize Elephant house by the huge red sign at the entrance and crowds of tourists taking photos in front of it (especially famous among Asian tourists). Last but not least I will mention the Christmas spirit which enchants Edinburgh from the end the November until the beginning of January. Two Christmas markets take place on Princess street – one typical Scottish and one in European style. If you are visiting the Scottish capital at that time of the year you will definitely be enchanted by the Christmas spirit. At the markets you can find diversity of Christmas decorations, presents, food, drinks, hats, scarfs, gloves which can protect you from the winter chills. During my first visit to Edinburgh I was saved from the severe Scottish wind by a knitted hat from the Christmas market which I still keep as a loving memory. 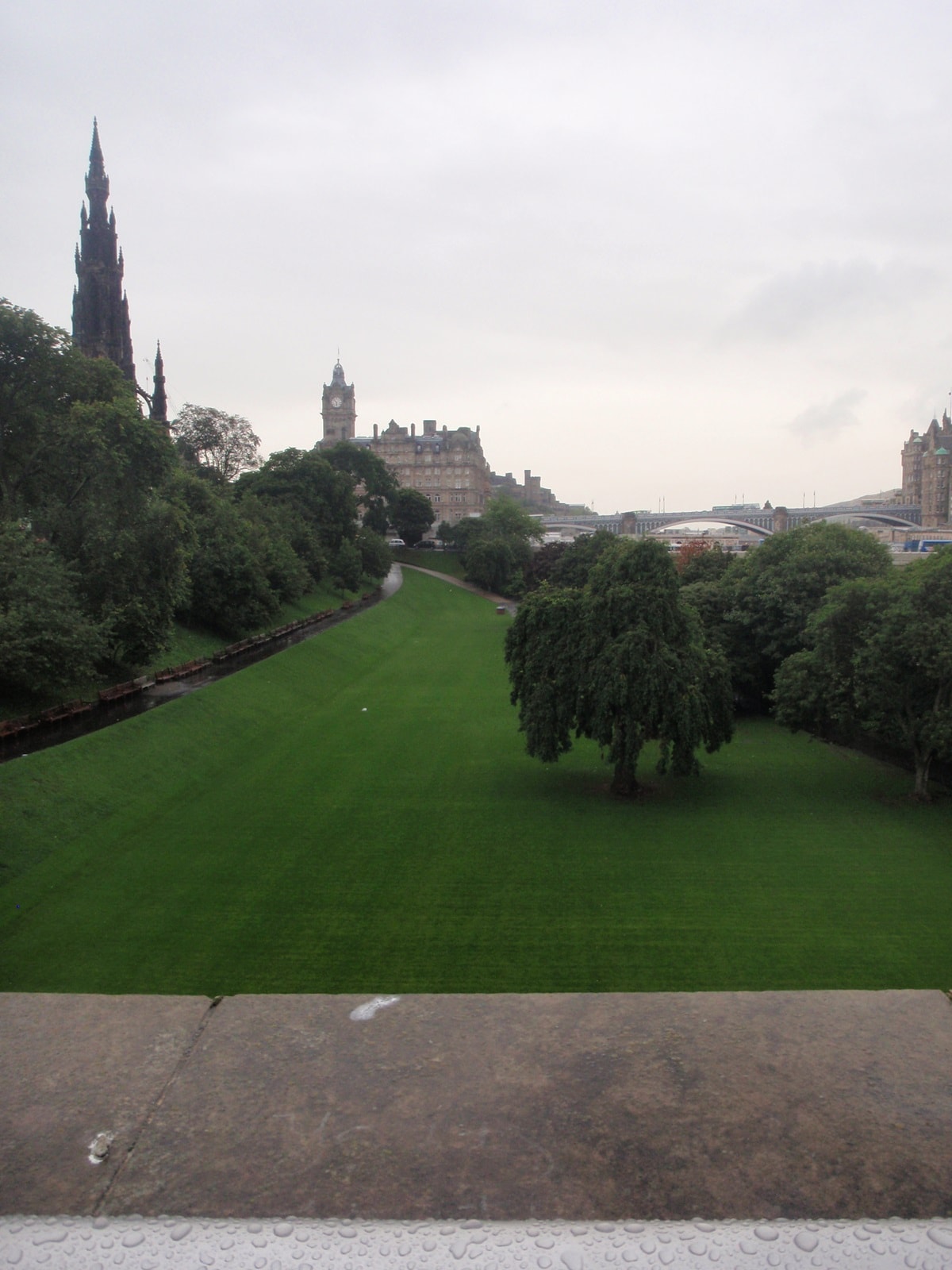 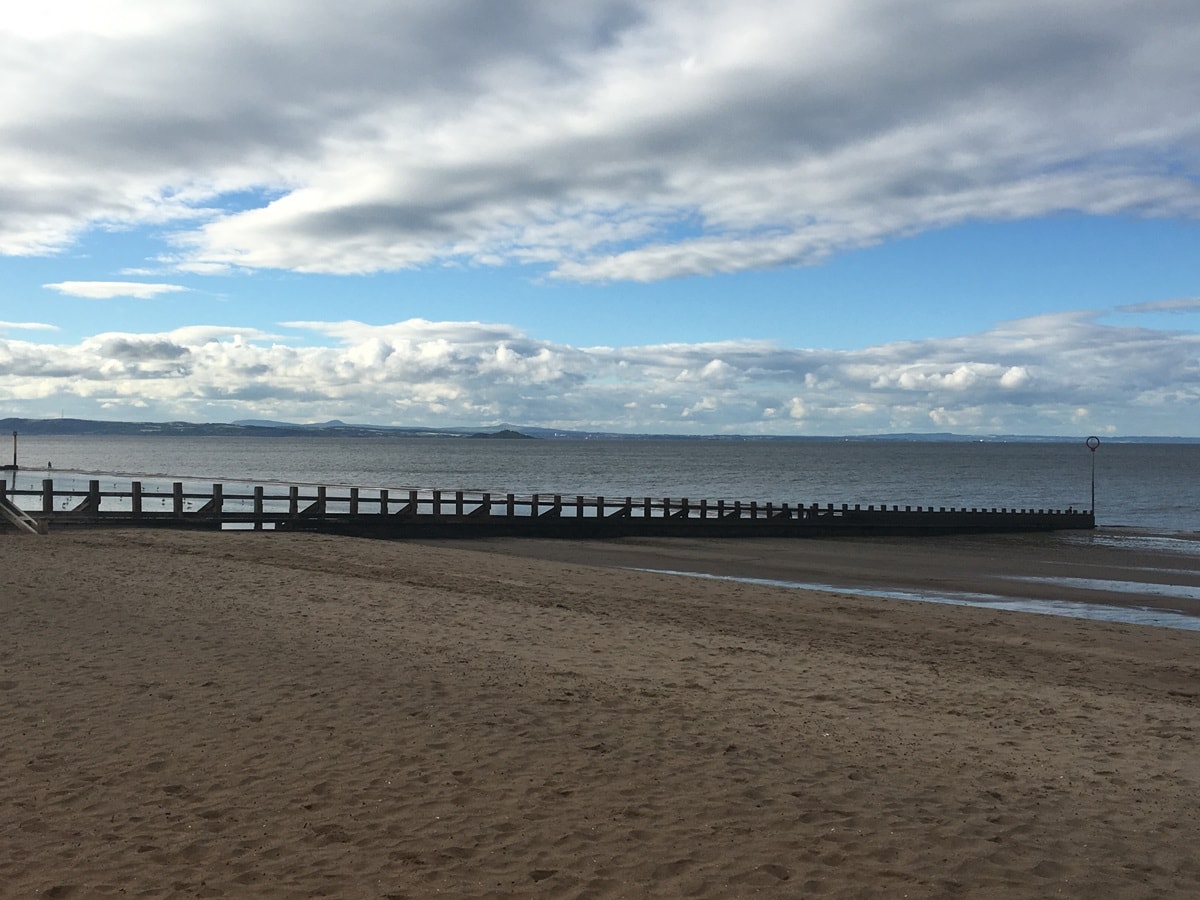 Edinburgh definitely has this magical power which will catch you from the moment you arrive at the train station or reach the central area from the airport. The landscape which opens up in front of you, looking from Princess street, can only give you a hint of what does the Scottish capital have to offer, under the sound of Scottish bagpipe. 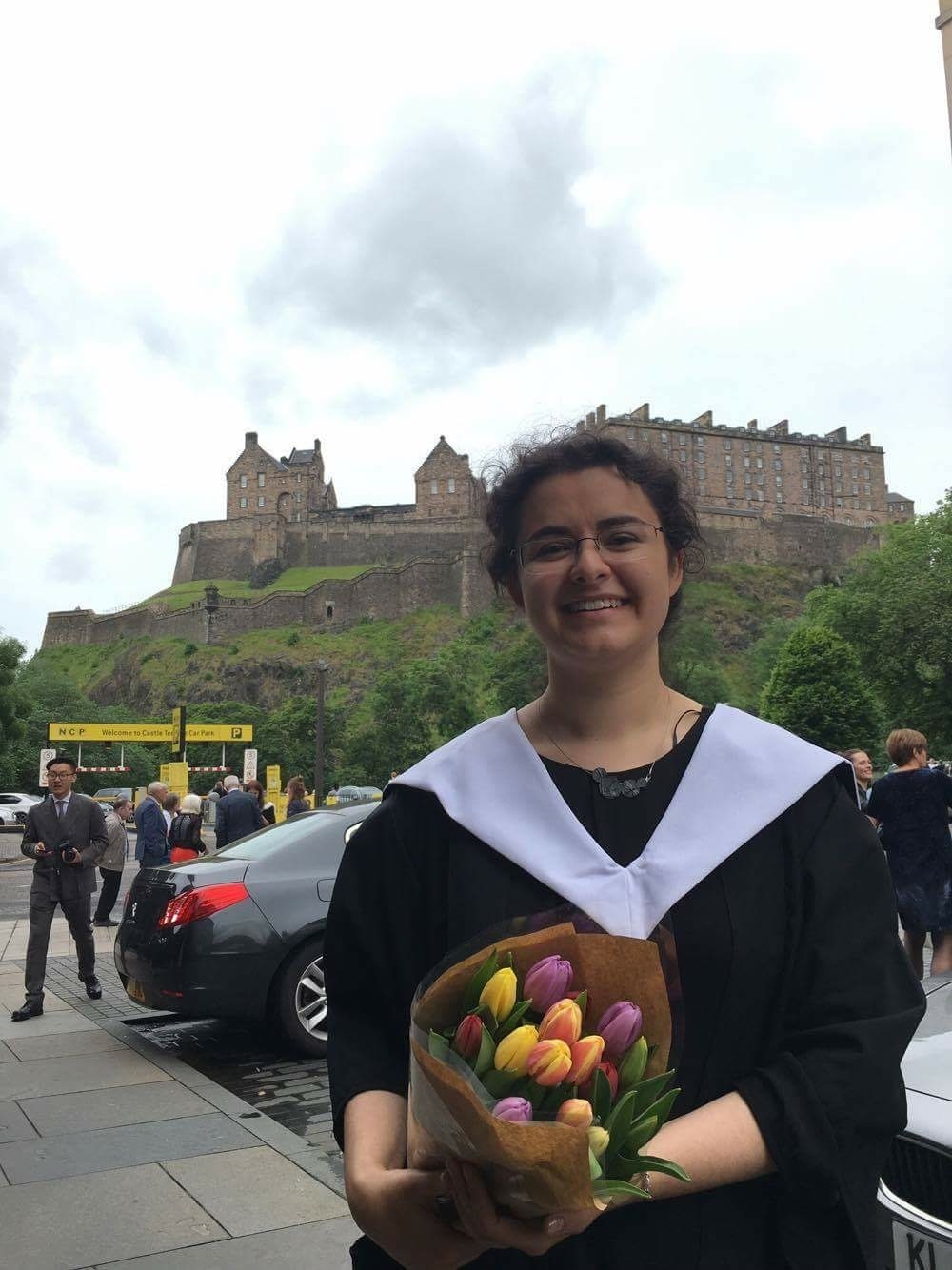 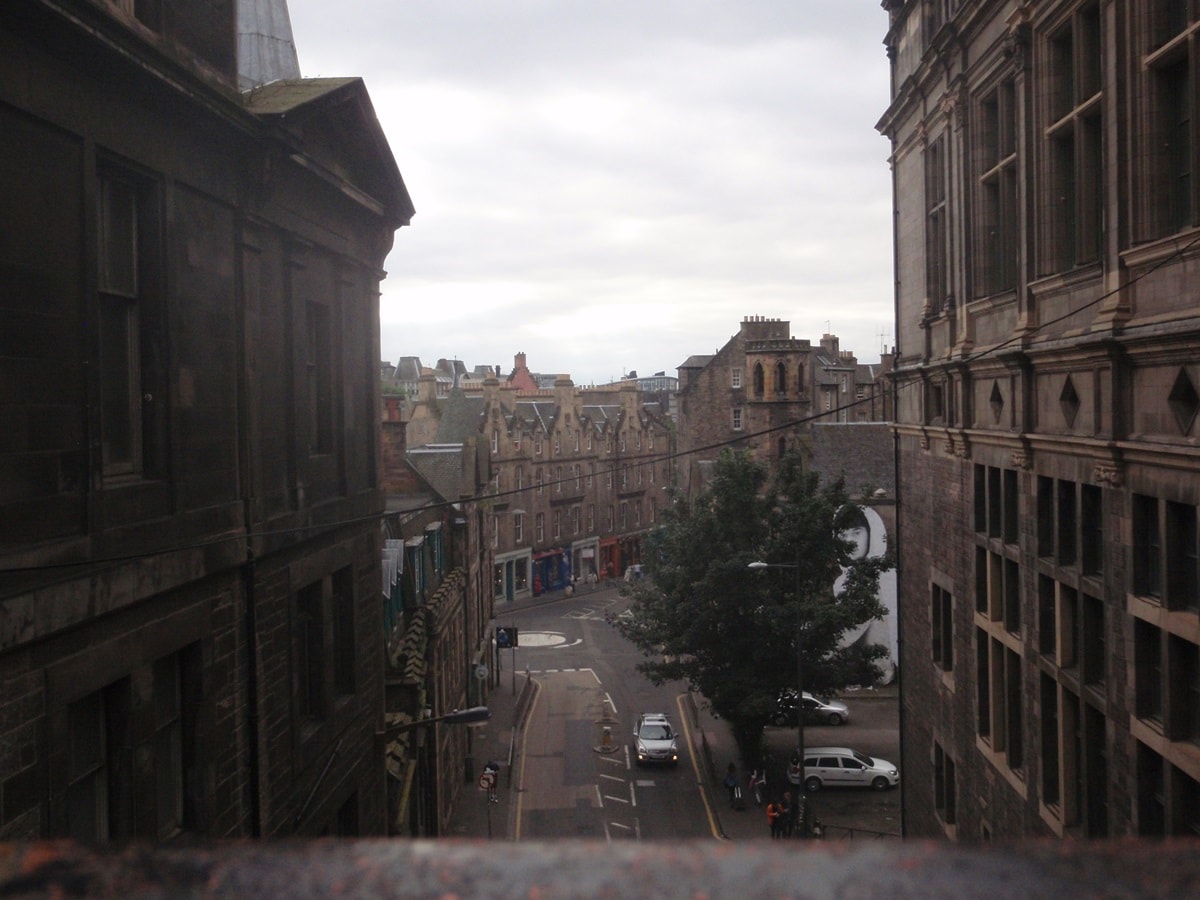 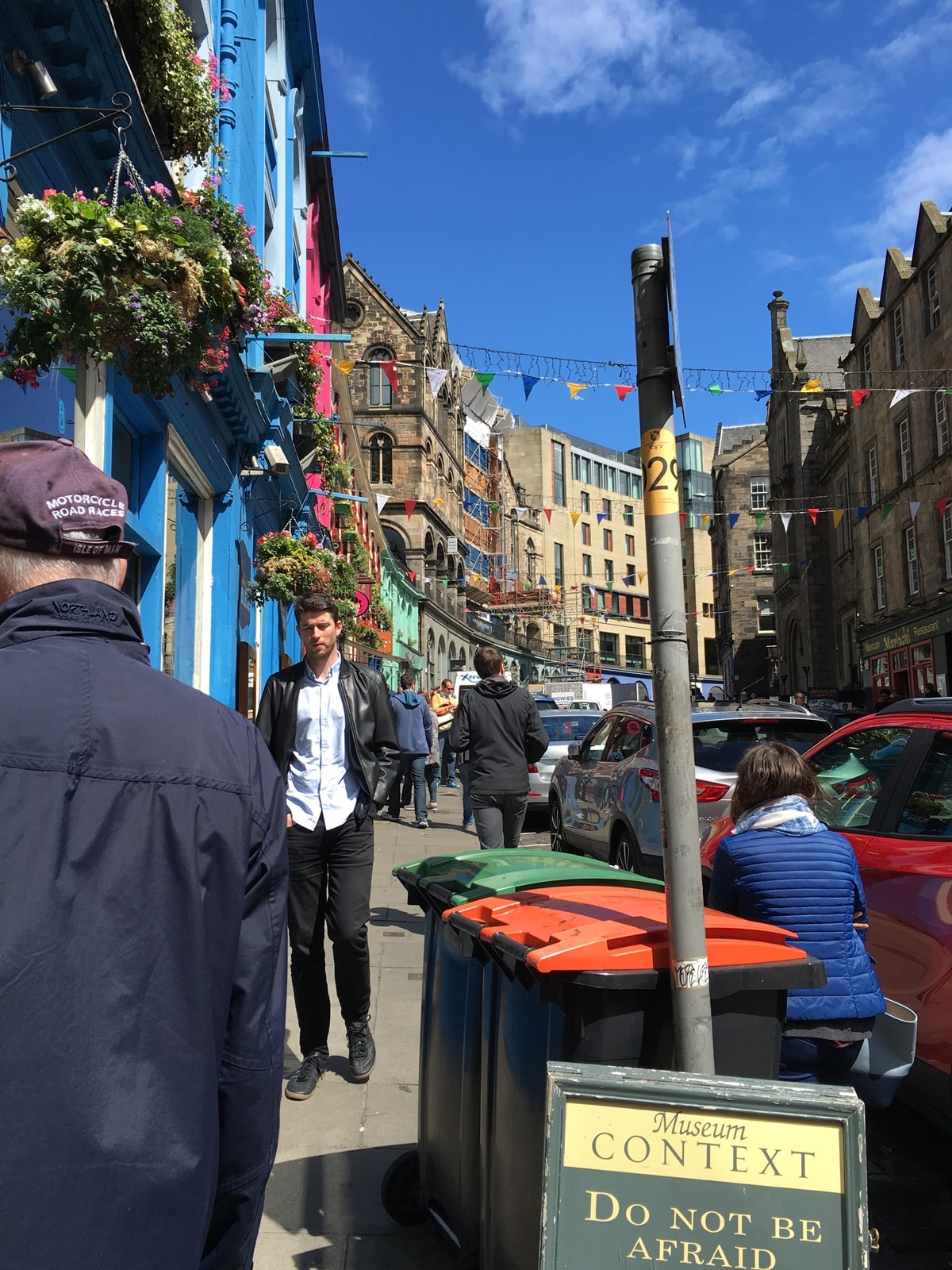 "Autumn on the beach- Part Two"

Coimbra – a lesson of love and tradition

The adventure of being a Portuguese #Coimbra On the banks of the Mondego River, rises a beautiful city soaked in...