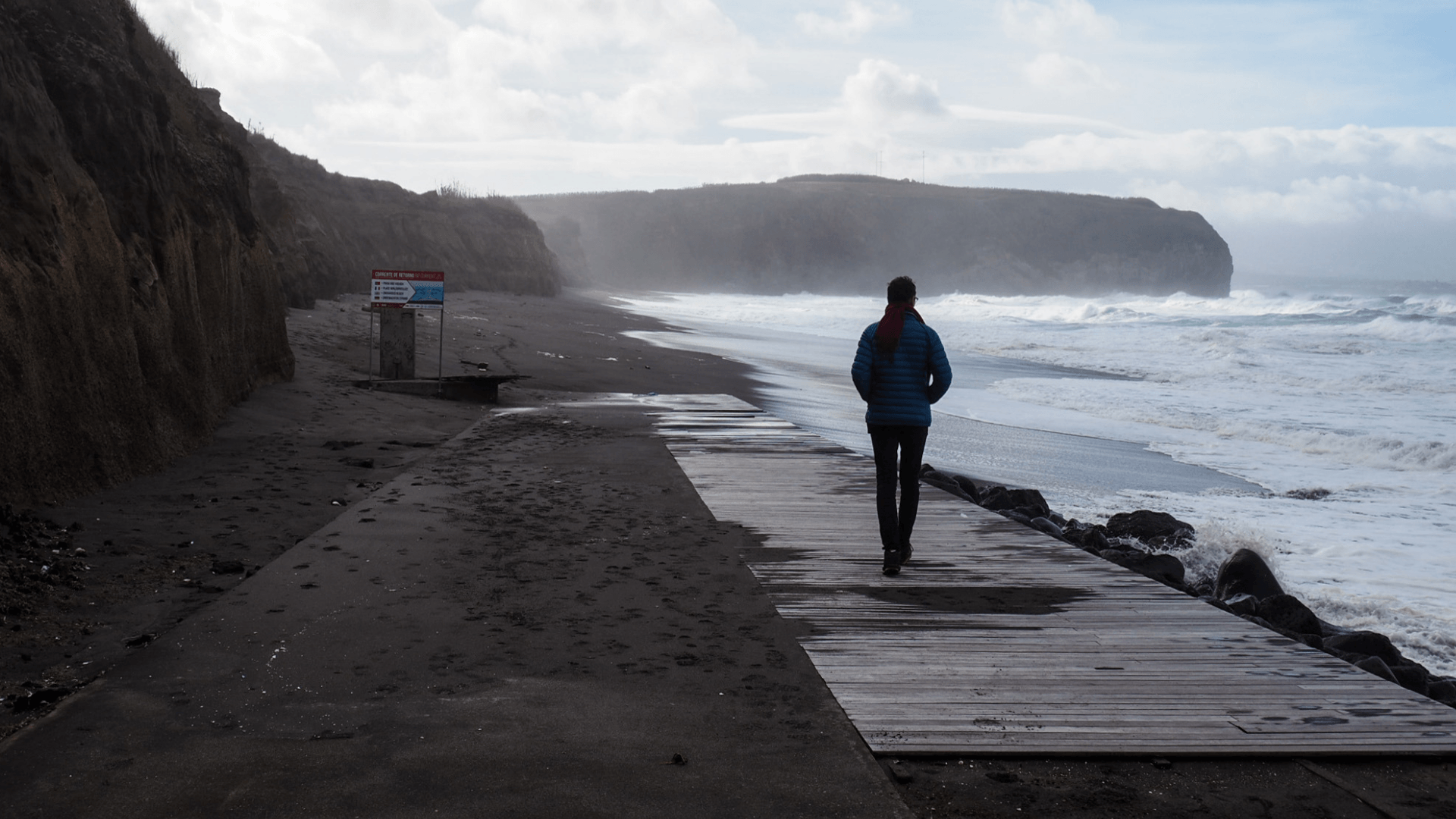 The adventure of being a Portuguese #Azores 3

The Azores have an extremely diverse nature, attractions and more. That is why today we will look at the last part of San Miguel, namely the eastern part, plus the administrative capital Ponte Delgada. The eastern suburbs of the island are famous for the steep slopes and beautiful panoramic views of the Atlantic Ocean, which provides us a sense of how small we are, compared to nature.

Ponta Delgada is the (non) official capital of the Azores and is the largest and most developed city in the archipelago, with approximately 46,000 people living in the city. The first thing that will catch your attention here is the interesting architecture that is present in all the cities on the island, the beautiful pure white buildings, decorated with elements of basalt stone, of which they abound. 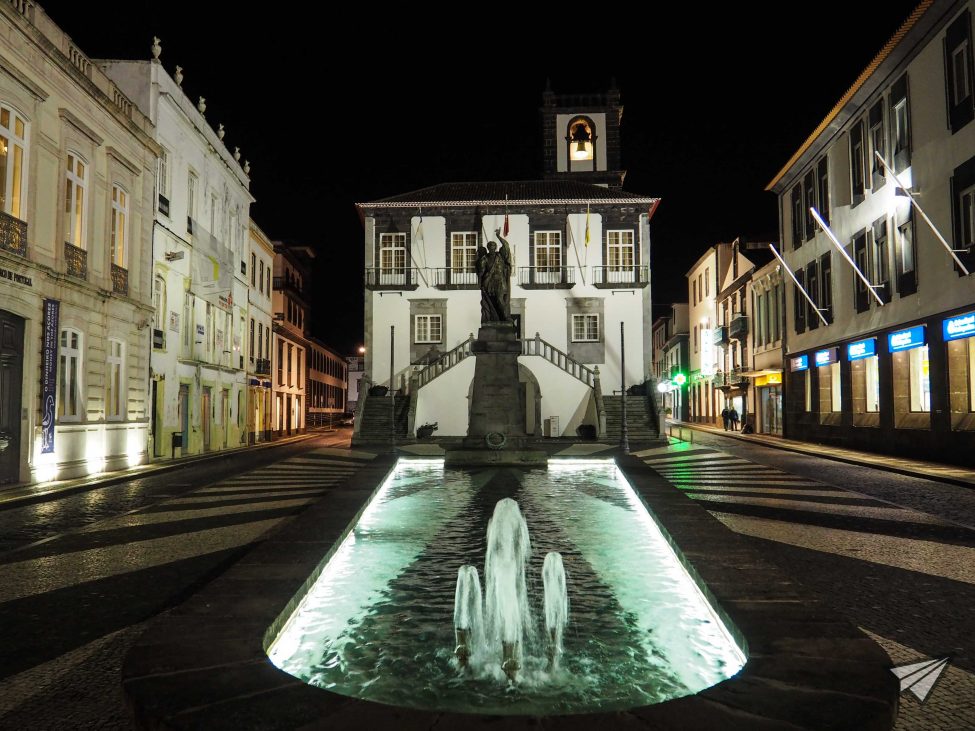 I have to admit that we made a quick visit of the city as we were constantly on the move from other parts of the island, but we certainly did have a nice and memorable view of Ponta Delgada. Most historical and major landmarks are in the center. 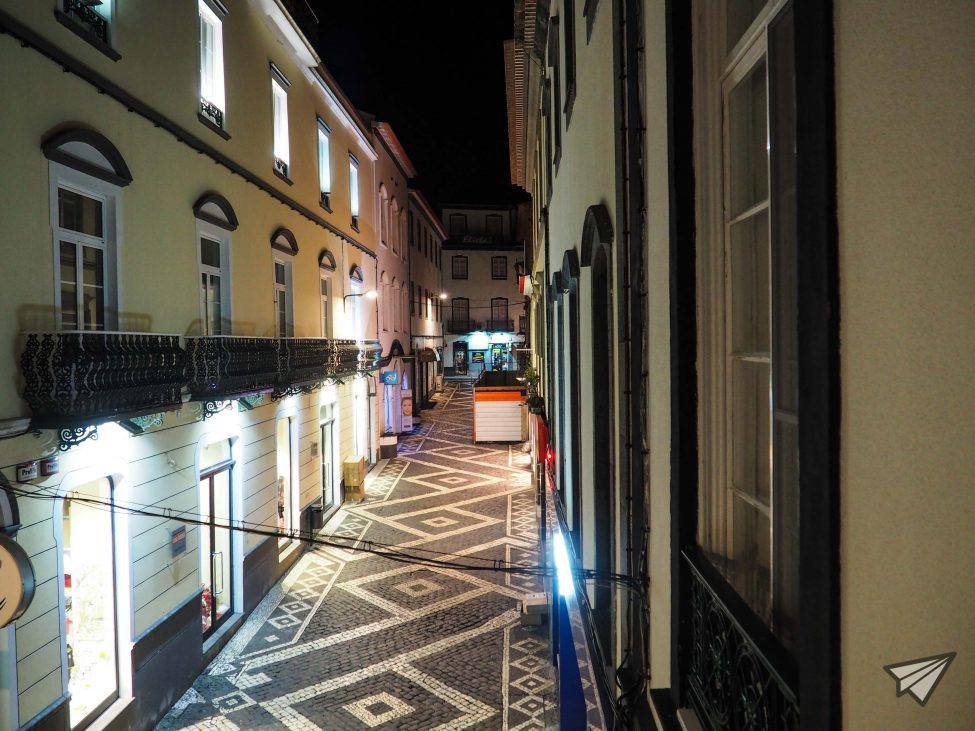 The symbol of Ponta Delgada is the “door” that was built in the 18th century and served as the entrance to the old port of the city through its walls. To this day, it is located on the site where it was originally built. Behind it is the Church of São Sebastião, the capital’s main church. Built between 1531 and 1547 on the site of a small chapel dedicated to the first patron saint of the island. This church has the tallest tower and also the only one that has a clock on the island. 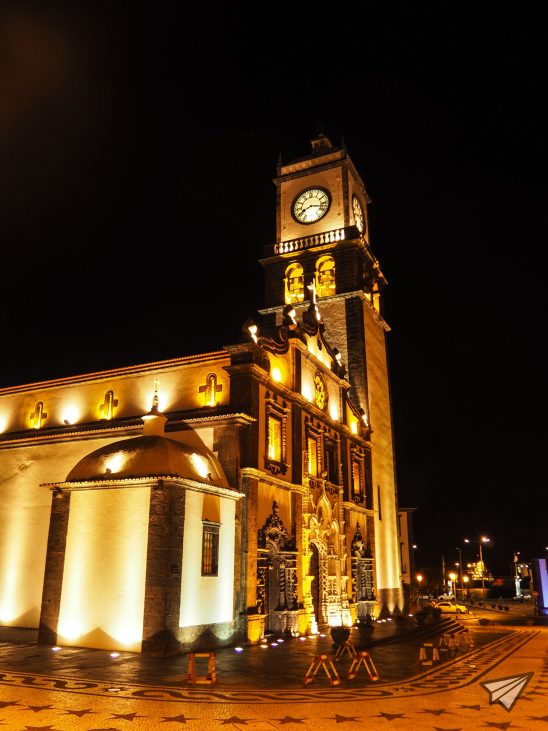 I highly recommend walking down the small streets of the city to take a closer look at the beautiful and interesting island architecture of the Azores. In this way you will have the opportunity to visit numerous shops with traditional products from the place, as well as to learn some interesting facts about the locals. 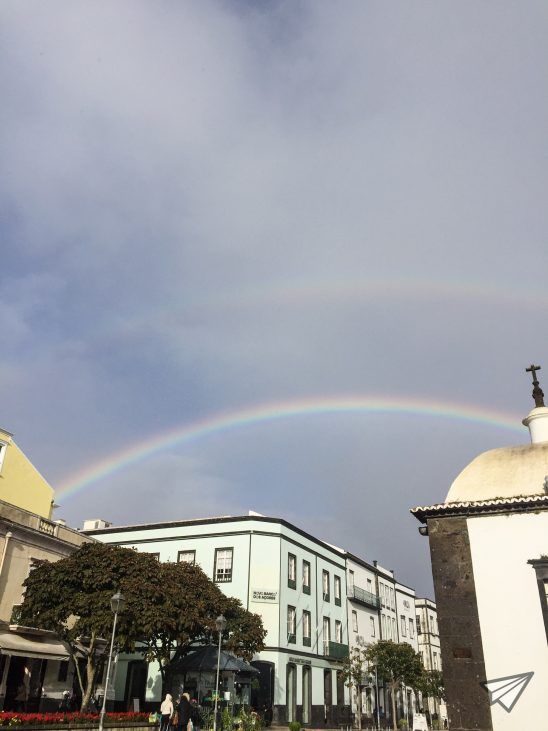 The tea plantations were one of the most interesting places I visited on the islands. The Gorreana plant is the oldest and only black tea plantation in Europe. The tradition here dates from 1883, preserving the way of cultivation and the ancient qualities of the product, which have been passed down for five generations. 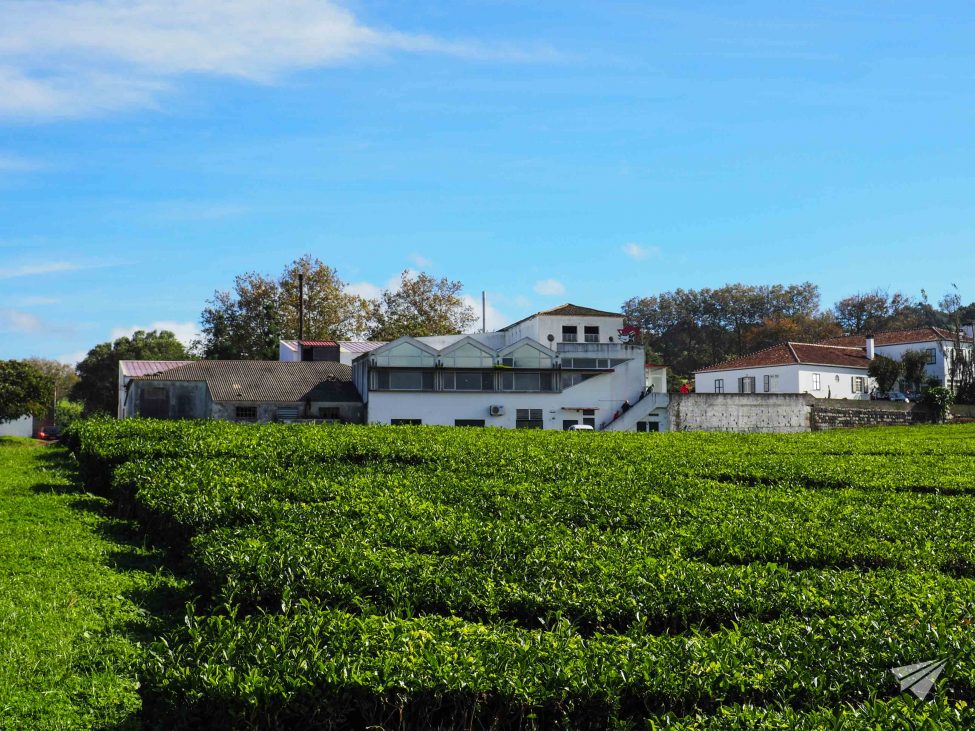 The place is impressive and interesting, it is the factory itself, where you can enter the museum section and look at the whole process of preparing tea from start to finish, which gives a clear idea of ​​the entire working life of this product. The factory itself also has a cafe, where you can taste their teas for free and buy if you wish.

But perhaps the sweetest part of this experience was the opportunity to wander freely in the tea plantations, they transfer you to a different world. The idea of ​​walking in the green rows of tea, sensing its flavored and all that, accompanied by a view of the ocean, is an invaluable moment. 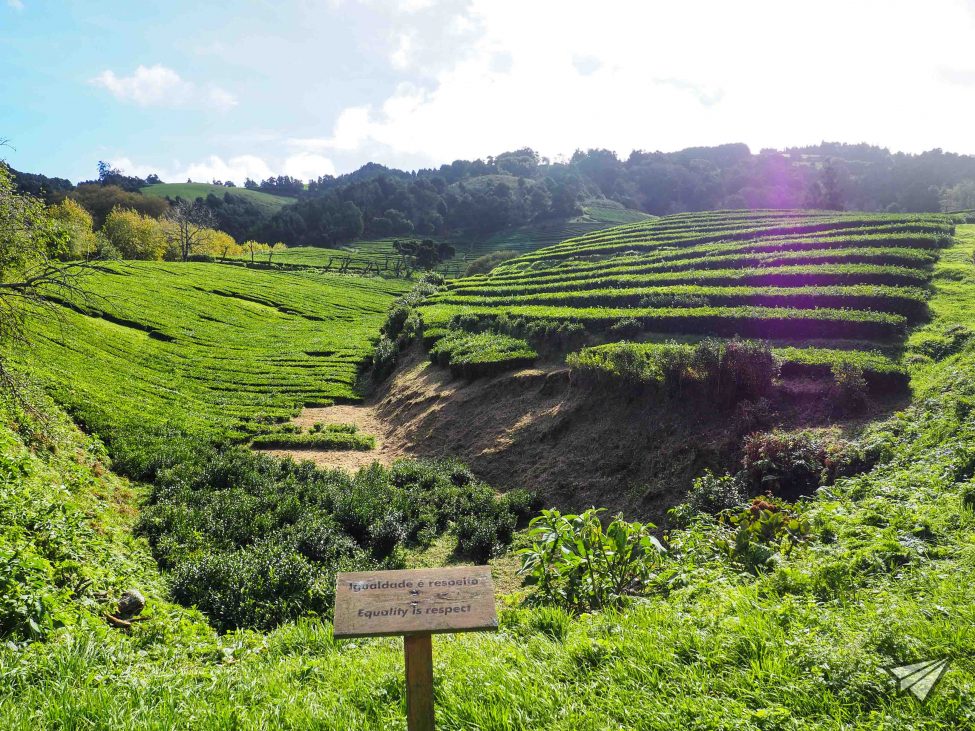 Who needs to go all the way to Iceland to see the black sand beach, as can be found on the Azores! Have to emphasize that this beach is located in the northern part of the island, but we visited it on the day we explored the “eastern” part. 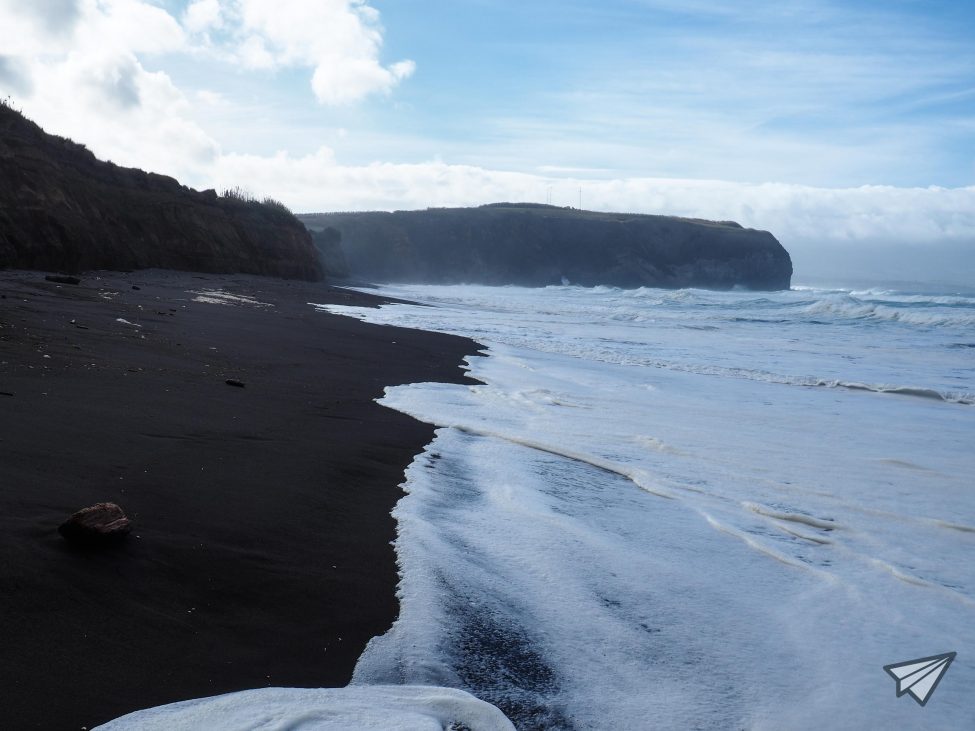 Saint Barbara, as this beach would translate, is one of the longest sandy stripes in the Azores and has exceptional scenery. This beach is best known for surfers as it hosts some of the largest surfing championships in the world, suggesting that some of the most magnificent and impressive waves will be observed here.

As I mentioned, in the eastern part of San Miguel there are mostly high slopes, which is the perfect spot for panoramic landscapes or better known as miradouros. Miradouro da Ponta do Sossego is one of the many panoramic sites in this part, but its uniqueness comes from the fact that it has about 13,000 m2 of garden, spread over several terraces.

The view from Miradouro da Ponta da Madrugada is located right on top of a beautiful rock with abundant vegetation. From here you have panoramas over the magnificent beauty of the fantastic Atlantic Ocean and the scattered island of Sao Miguel, where nature shows its essence. 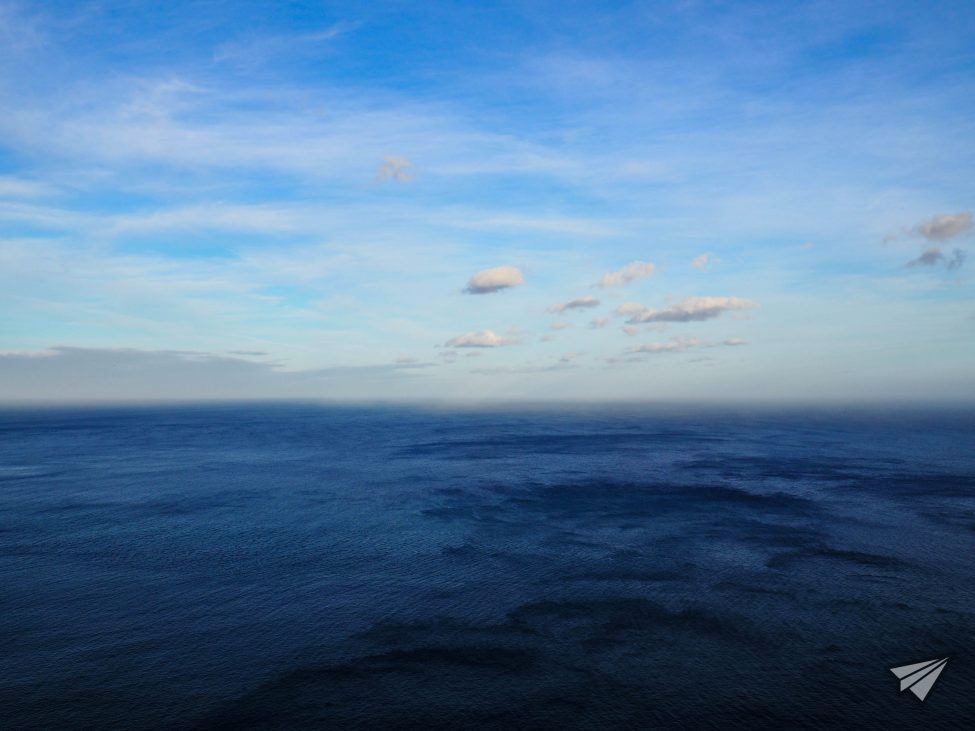 We ended our day with a panoramic view of Pico Long, which in size is nothing special, but offers a more interesting view of the city of Povoacao and the surrounding mountains. In that way we enjoyed our last sunset over the Azores and the Atlantic. 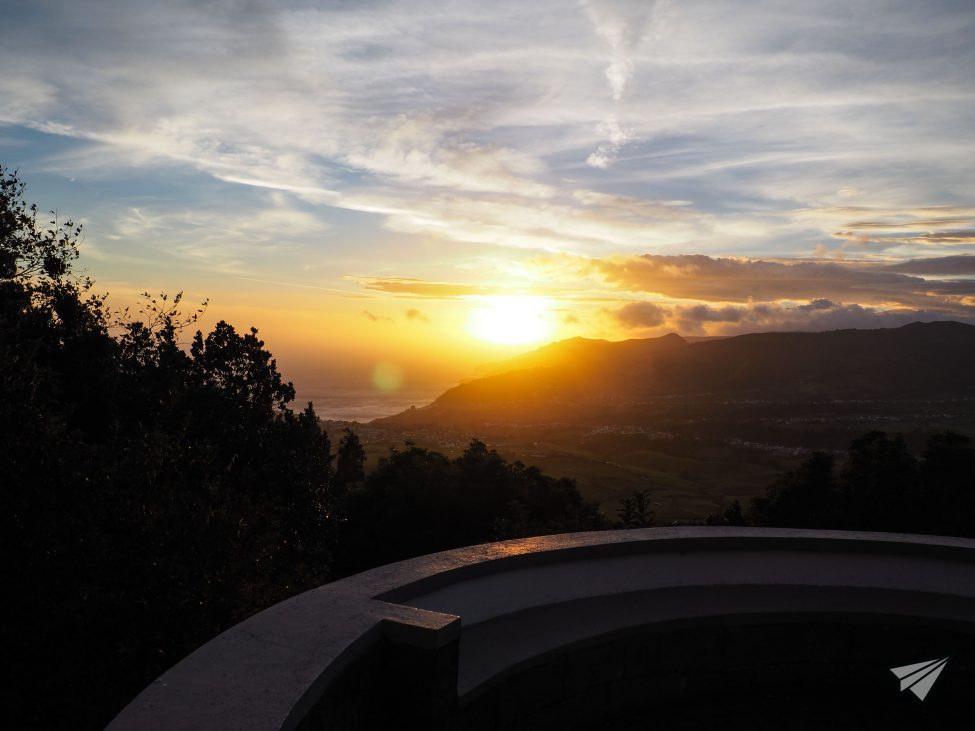 That’s how we ended our small stroll in the Azores. There are certainly things I haven’t been able to visit, but no problem, I won’t mind going back to this piece of paradise. 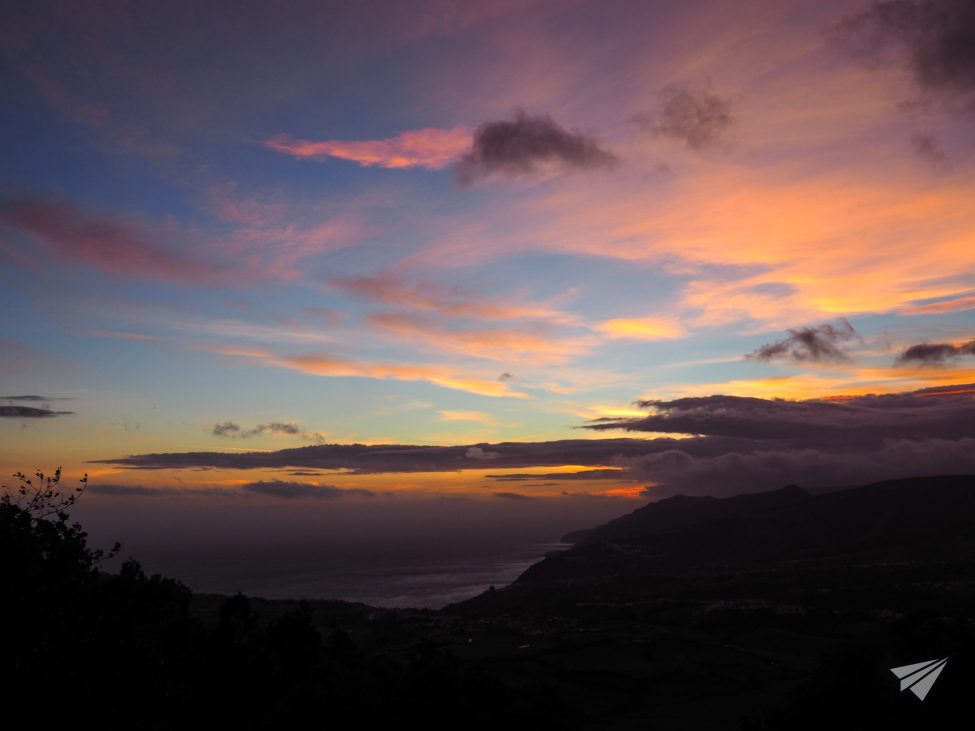 The place is amazing and worth a visit, with every year becoming more accessible and popular amongst tourists. This is not always a positive thing, of course, because it can be overload the island’s capacity with mass tourism, so always be responsible wherever you travel and set an example for others.

Learn more about the central and westen part of the Azores.