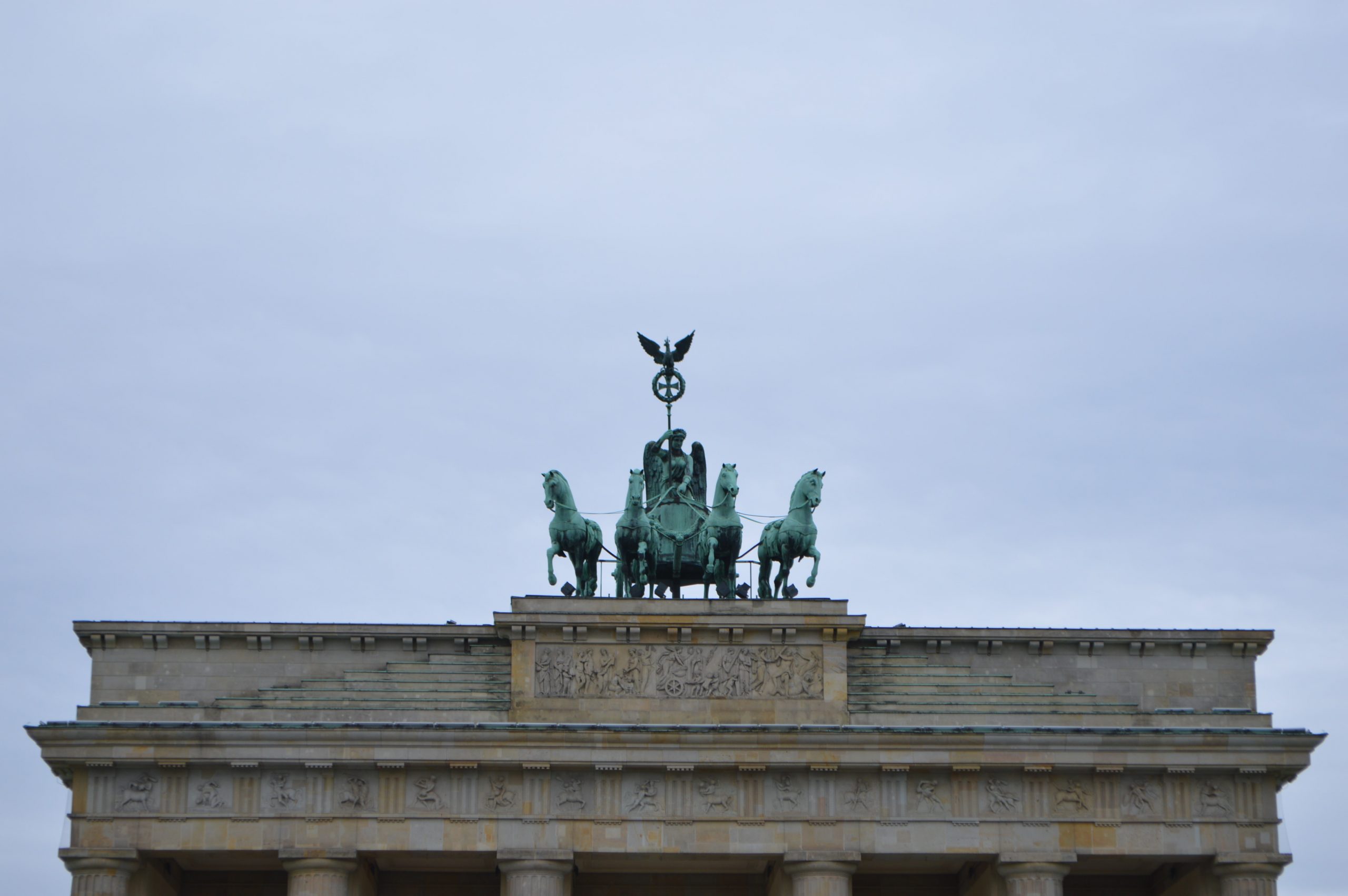 The many faces of Berlin

I’ve always had an imaginary list of dream destinations, and it’s already physically here. However, no matter how much I love small, pretty towns and villages, the megapolises are just there and remind of themselves. London, Paris, Berlin, Milan. Sounds like a looong fashion-week tour full of shops of extravagant designers. But it also means, however, lots and lots of history in each and every corner. 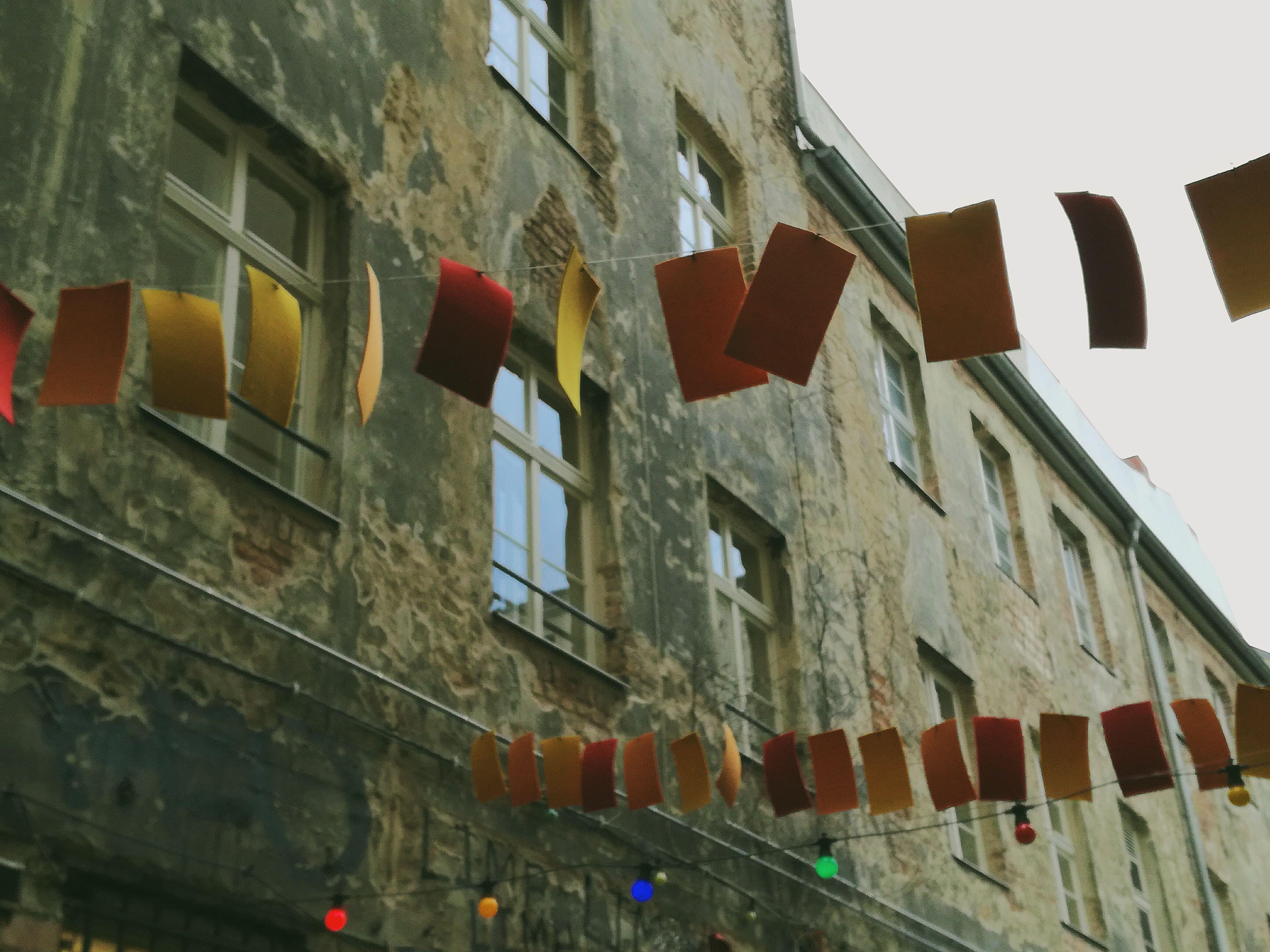 We were fascinated by Berlin’s casualness and multicolorness. It seemed like a teenager to me – this modern city is young, colorful, noisy, unorientated, fast-paced. It’s still wandering and struggling to find himself, trying out in the fields of fashion, architecture, art, business…  it seems like it can’’t failry get enough of anything and grab a bit from here and there. On its face, however, there are permanent scary scars for which there is no makeup, mask or graffitti that can hide them. Scars so deep that it starts to hurt you too.

What I’m talking about is Berlin during World War II (1939-1945). Afterwards, Nazy Germany was divided into four occupying zones, being surrounded entirely by the Soviet Union. The western allies – UK, France, USA, form the so-called West Germany (FRG), and the Soviet occupation zone – Eastern (GDR/DDR). Berlin became the capital of the GDR and was separated between the two countries. In fact, the city existed since the 14th century, it was the capital of Brandeburg, the German Empire, Prussia, but walking on today’s streets, as though falling bombs from the sky and the thunder of the ruthless war with thousands of victims still echo. 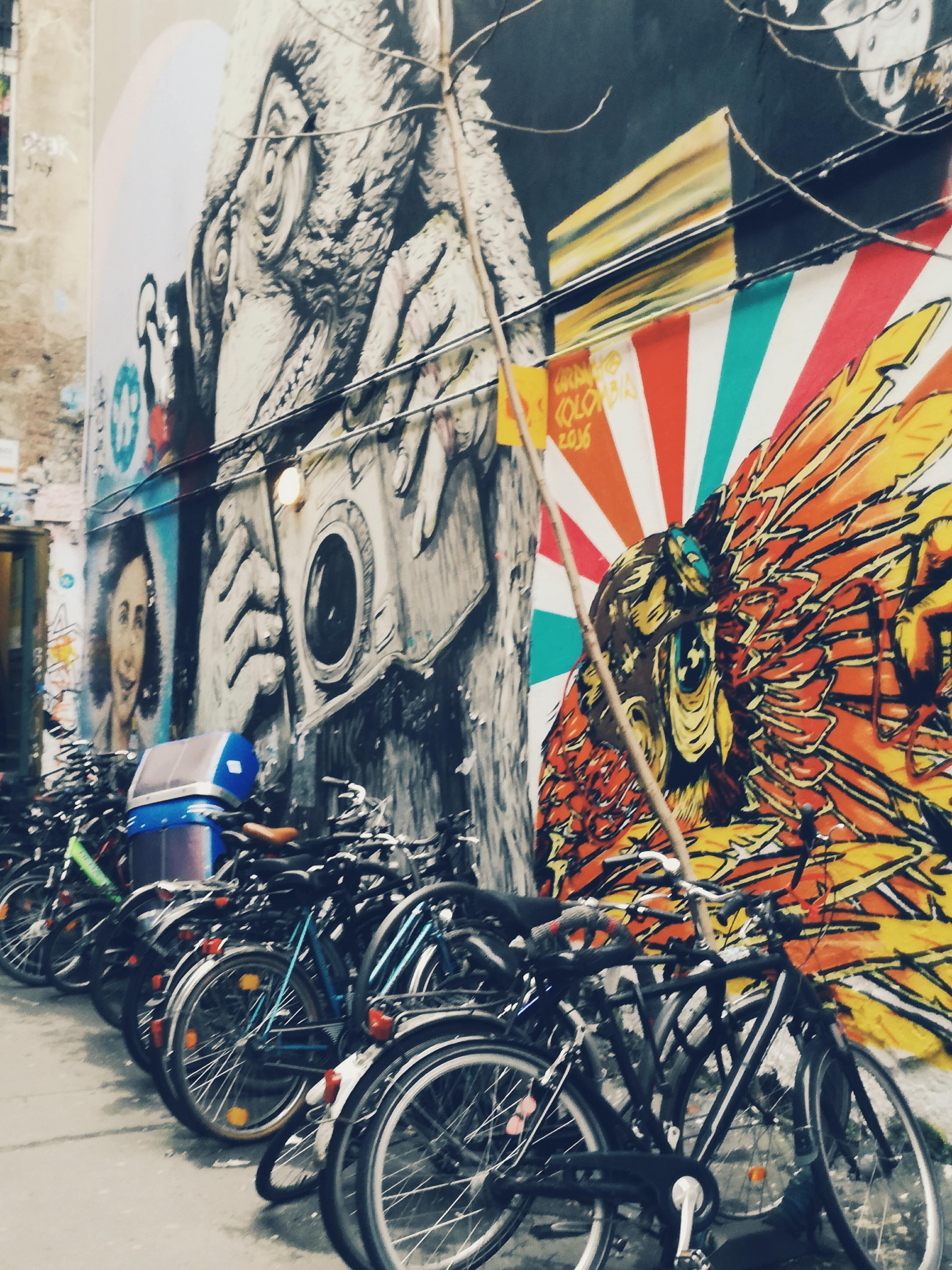 We arrive late and enjoy the night city lights, and our first job after the regular morning coffee is to get a Berlin Welcome card. For maximum tourists’ comfort the card may be for 48h, 72 h. or more. In our case it was a 4-day pass provided us with unlimited public transport and access to the most interesting landmarks and restaurants with fair discounts. When I’m abroad, honestly, I don’t like planning routes and visits by days, hours, minutes. But this little booklet you get along with the ticket, provides you with well-aranged maps with example routes day by day, and the objects you’d visit are precisely described. I’m not going to hide that we stole some ideas and combined routes without worrying that something may stay out of sight. Of course, time is never enough and many of the must see” sights did not enjoy our presence – but what a better way to spend our next stay here, right? 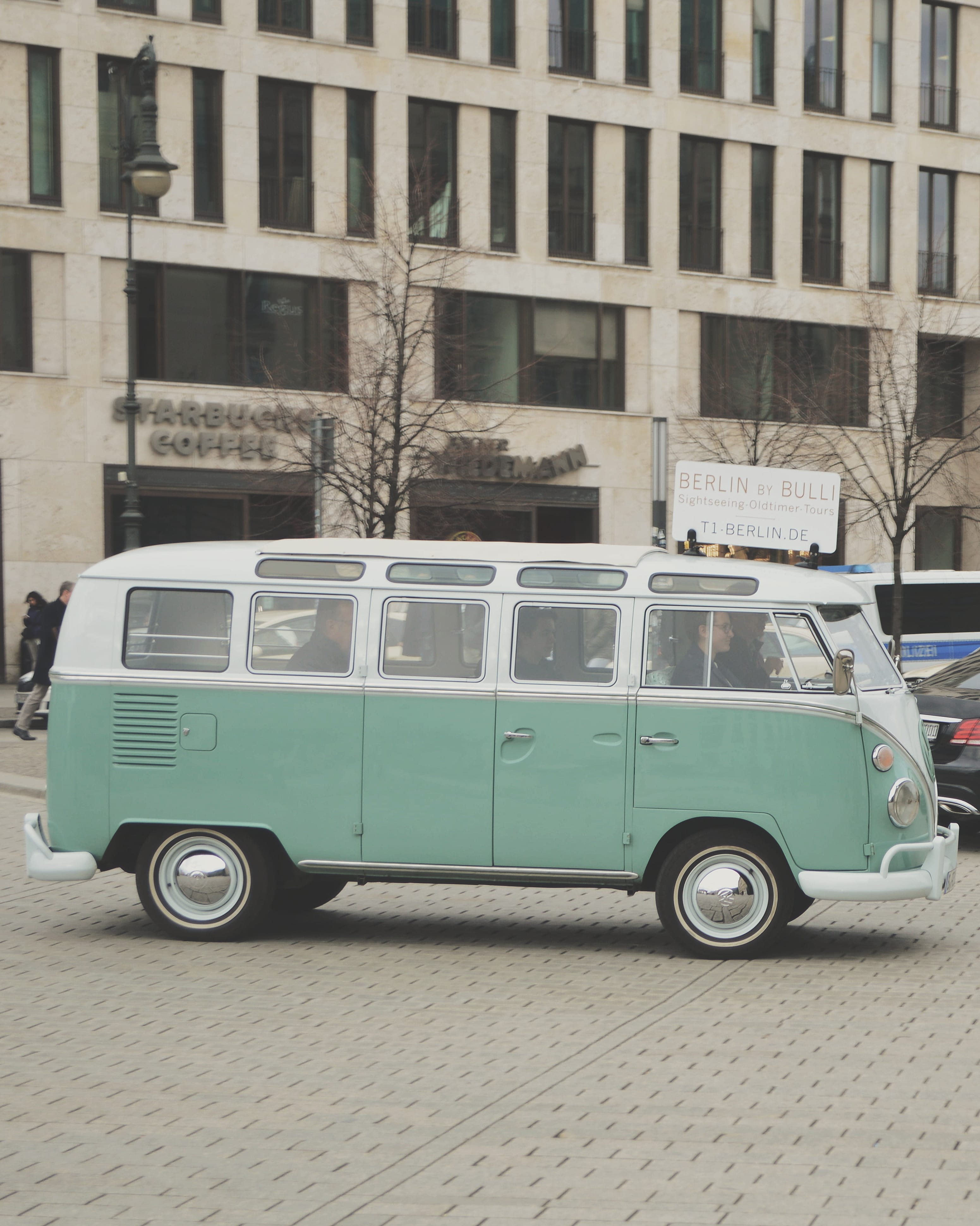 The most noticeable landmark in the city centre is the TV tower and the Alexandrplatz Square where one of the busiest transport points is located. Here in 1805 Friedrich Wilhelm III accepted with the honors king Alexander I, and later with named the after the Russian monarch. The tower itself was built in 1969, and with its proudly rising 368 m, is one of the tallest buildings in the world and an often visited attraction in here. If you are not afraid of heights, it is absolutely possible to see Berlin from a bird’s eye view – the tower is opened for tourists; you can take the stairs or the elevator up to the top, which lead to the panorama café-bar and the spherical rotating restaurant. The pleasure of the “ordinary” visit would cost you between 17 and 24 euros depending of the time of the day. 360 degrees Berlin in your hands. But keep in mind the long queues! 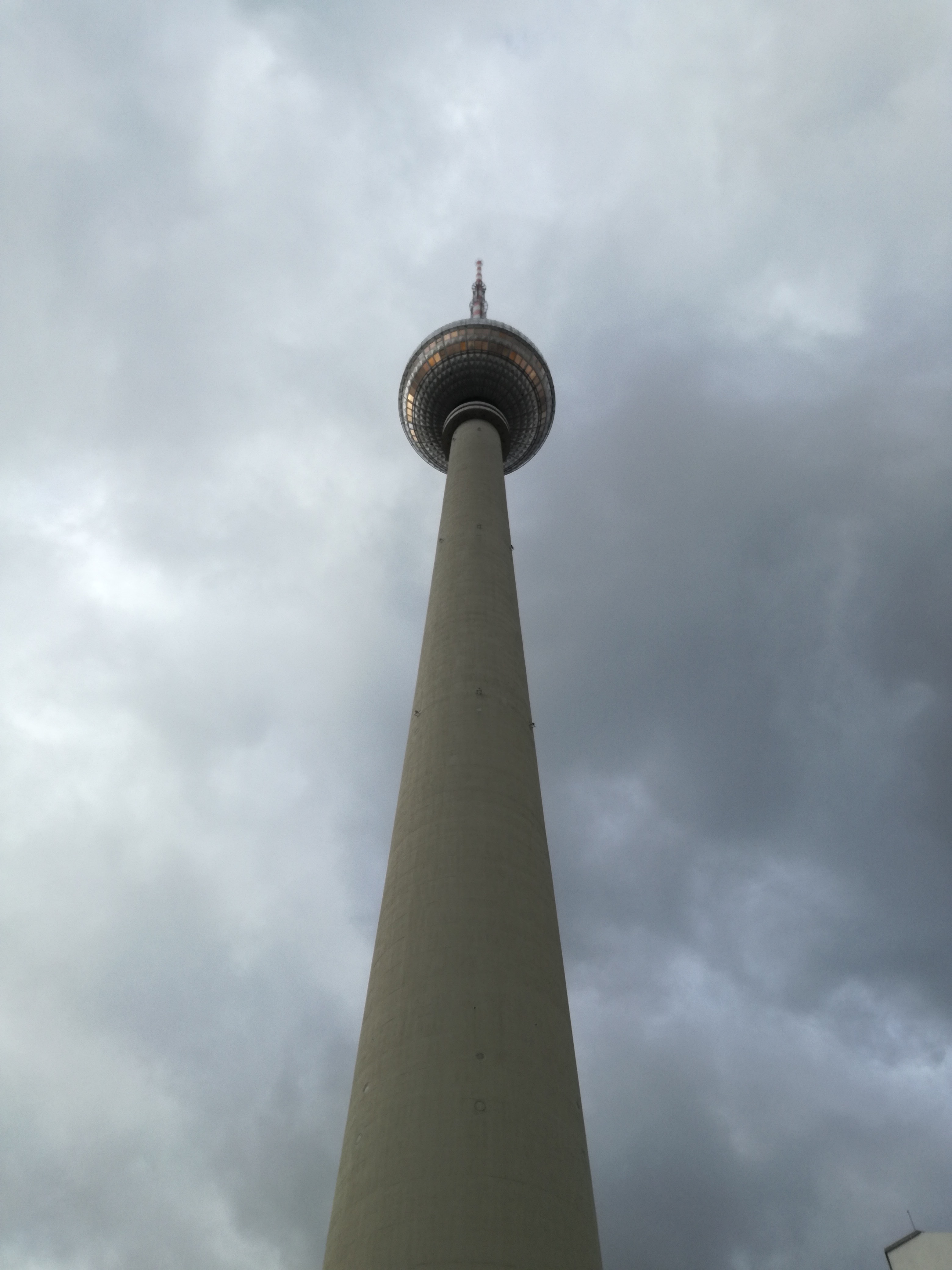 Nearby are also located the City hall, the GDR museum, numerous cute cafetterias and shopping centres, but as well the world’s largest clock, with historical importance. Its spheres show the time in 148 different parts of the world and rotate according to the time zone. 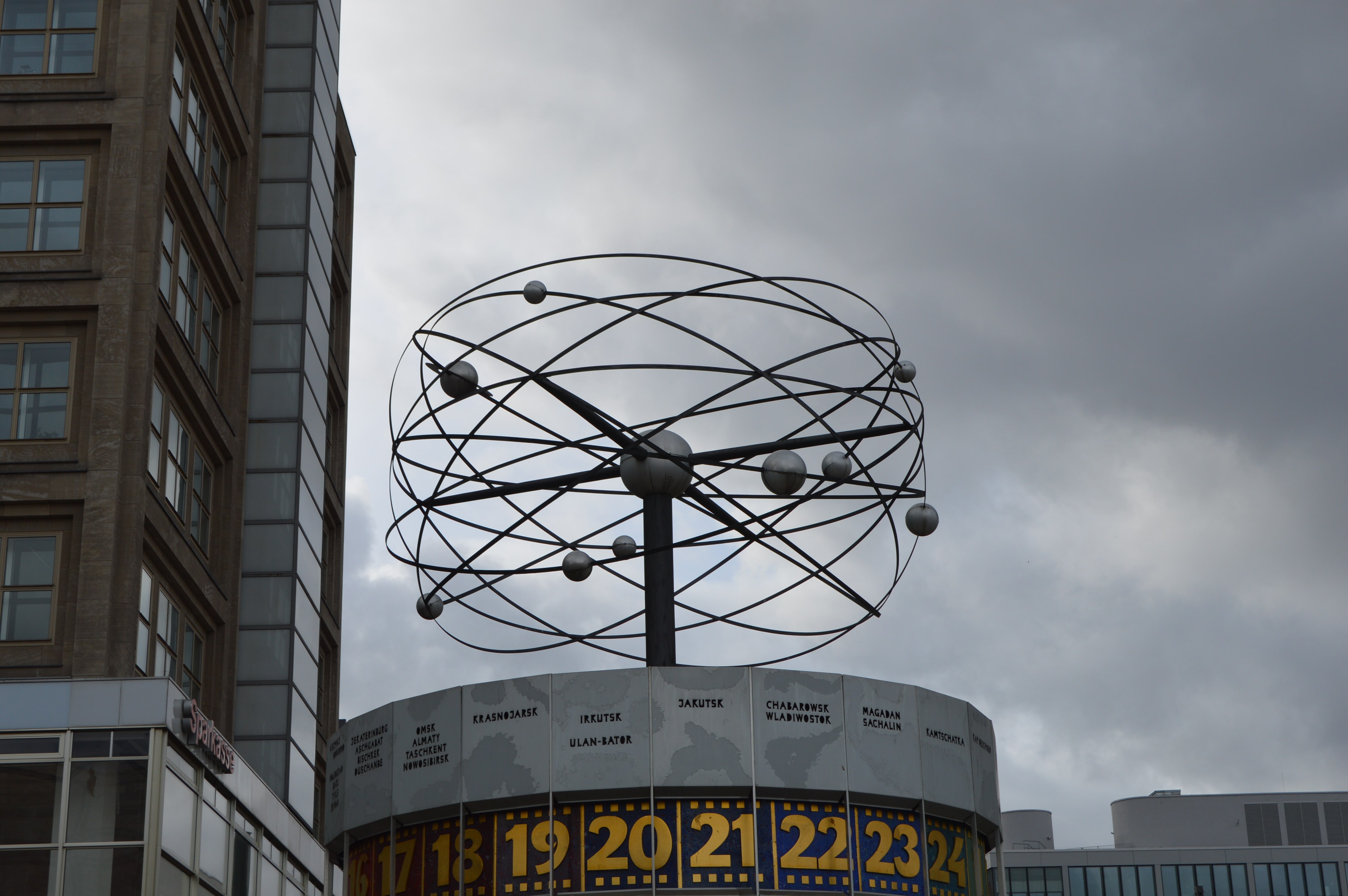 Not far from the Alexanderplatz Square is the famous Berlin cathedral (Berliner Dom), which, however, is in Neo-renaissance style and with domes. This is the largest church in the city and the center of German protestant society. Its visit happens after purchasing a ticket, the funds of which, however, are intended to maintain the building. 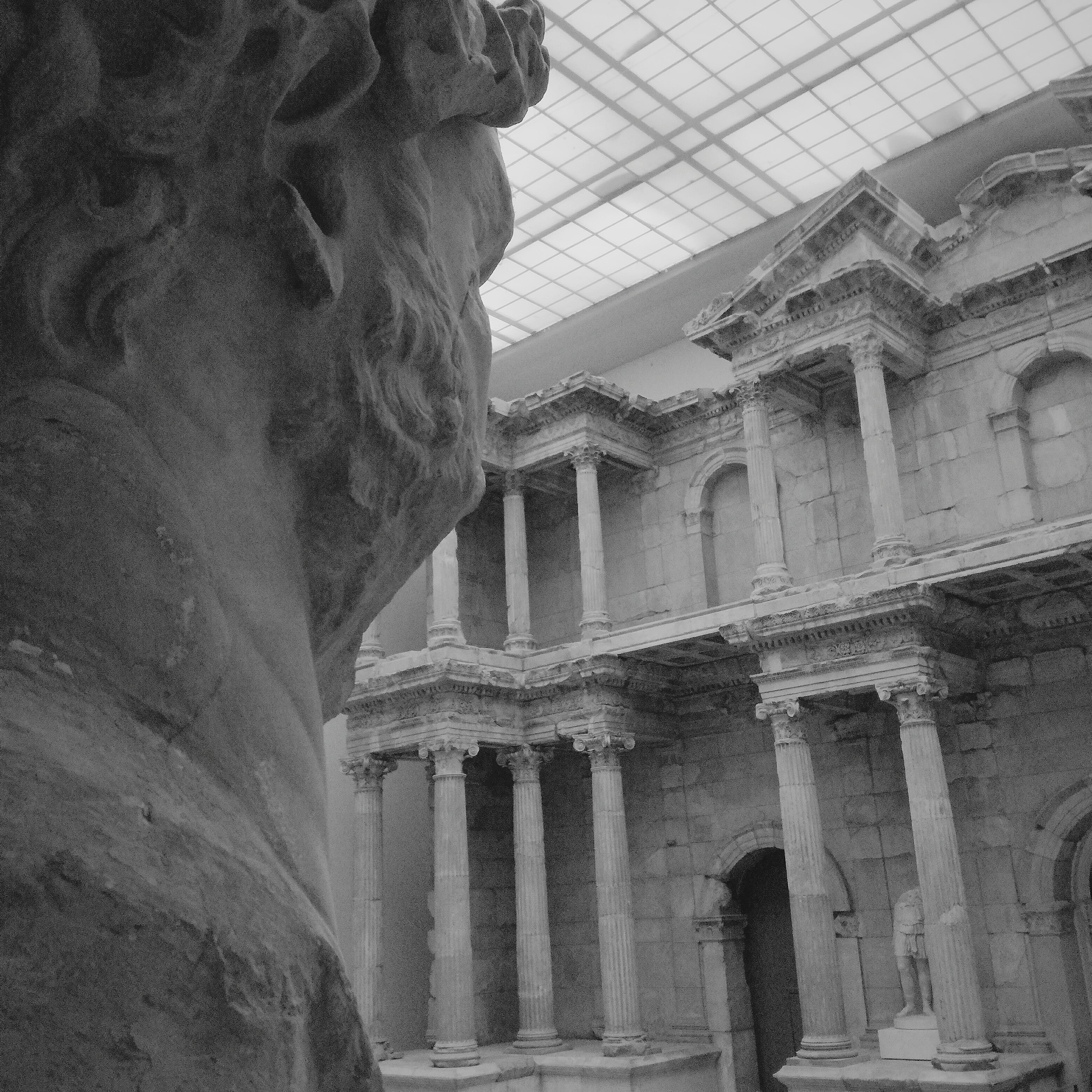 In the next few days we’d come back  in this part of town so often – we’ve booked it for a whole day, and we choose the coldest one. Because right here, where the main street “Unter der Linden” starts, is the famous Museum island. Museums are such a thing in Berlin! This is one of the places with the most museums in the world, and at the moment their total number amounts to 173. Bunkers, historical, mock-ups, wax museum figures, Lego, motorcycles made in GDR, German-Jewish history, currywursts and who knows what else. The Museum island, however, is a real gem in the heart of the German capital – it is a part of the international cultural heritage of UNESCO and includes five exceptionally beautiful, impressive buildings, homes, respectively to:

You can buy an all-entry ticket for the whole Island that is valid for one-time entry in all of the objects in a day. 18 euro regular price and 9 euro for students. 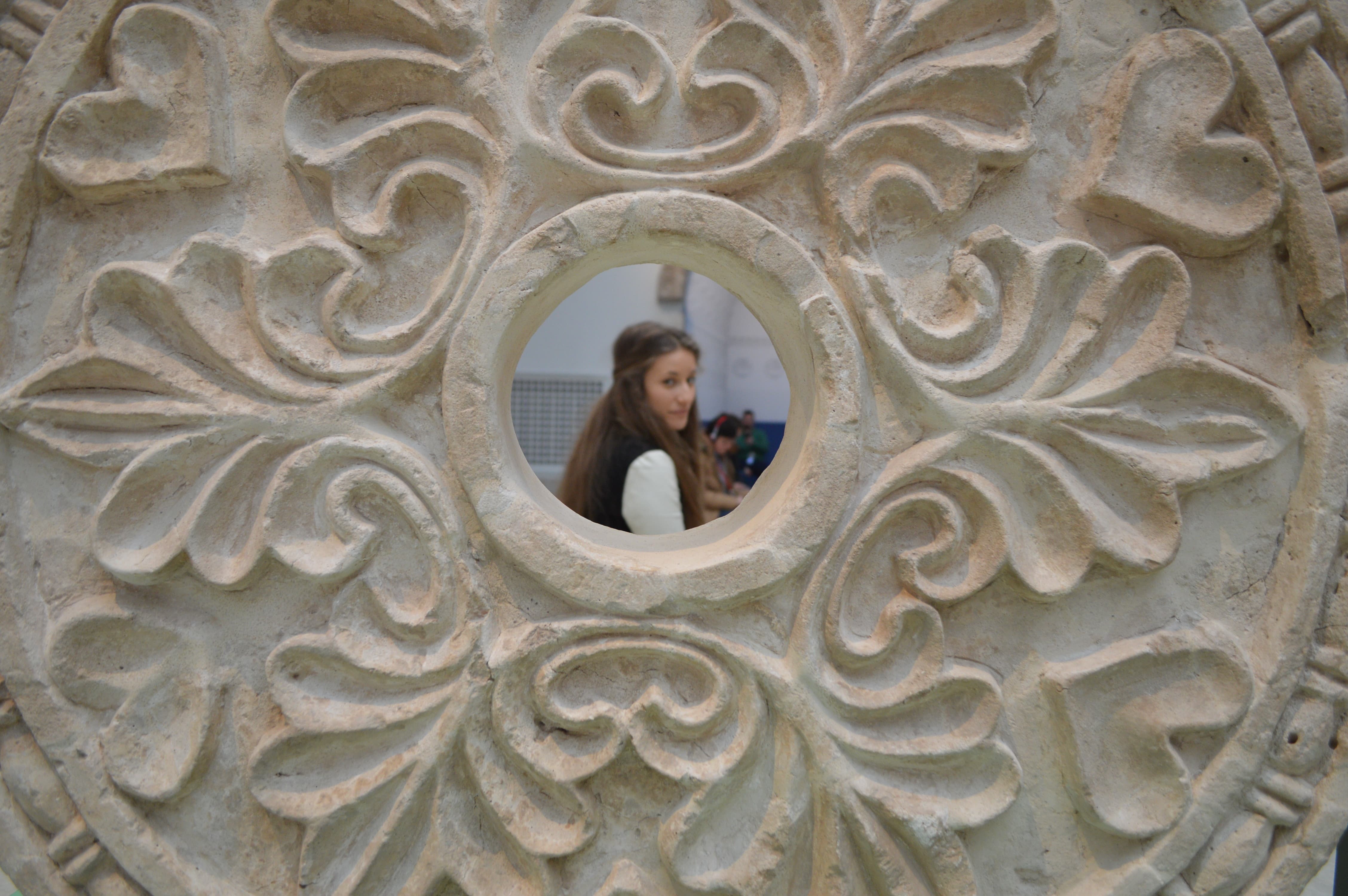 We take a long and nice walk trough the big boulevard “Unter der Linden”, as aside from us remain the buildings of the University of Humboldt, the Russian embassy, the Opera, and infront of us – the famous Brandeburg gate. The arch was built in the early 18th century, and somehow brought me back to the Jubelpark and Arc de Triomphe in Brussels.The quadriga with the goddess Victoria, has previously welcomed the victorious marches of Napoleon, and then Otto von Bismarck. Impressive with its 12 Greek style columns, this is the only one of the 18 gates-entrances left from the fortress wall of Prussia. 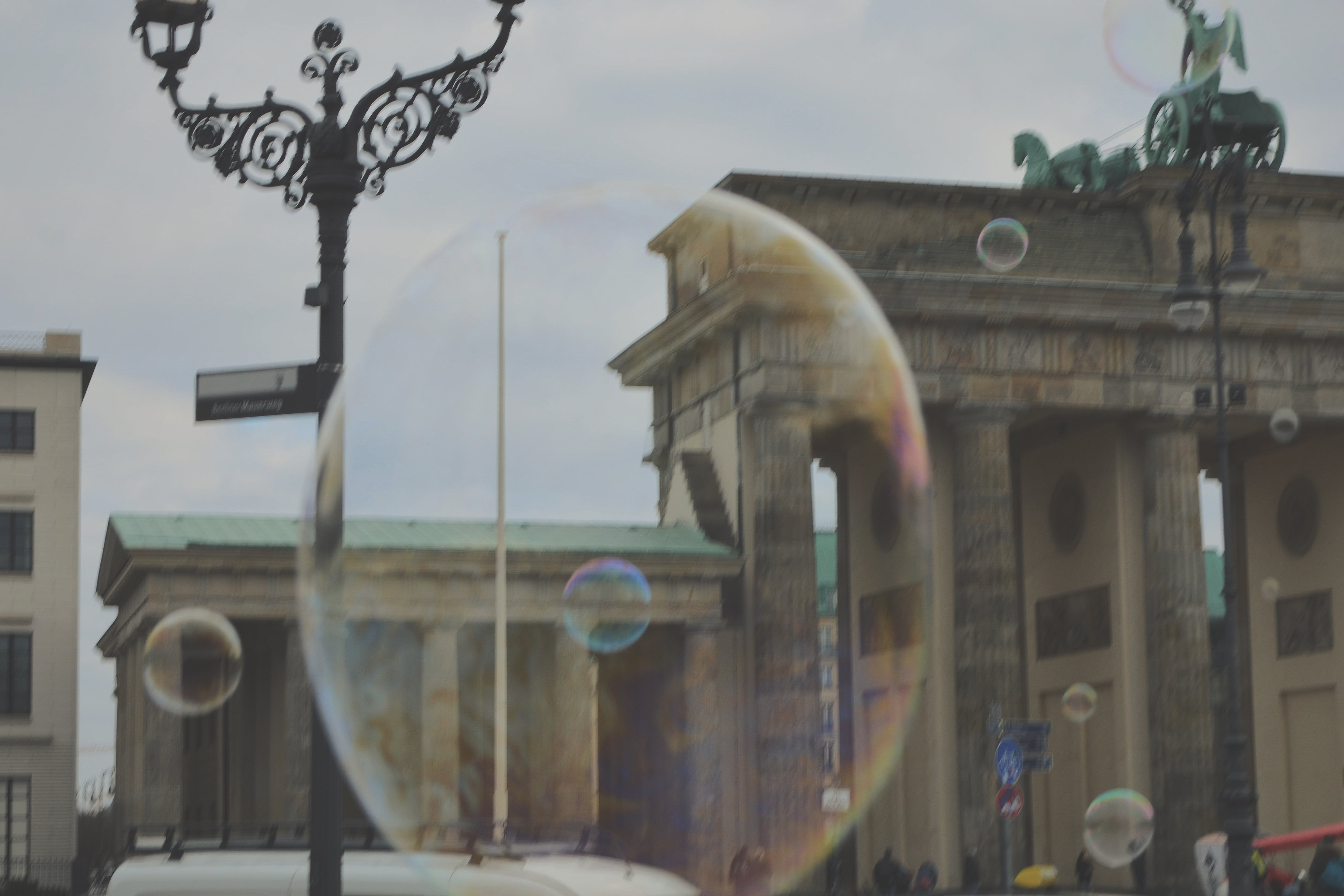 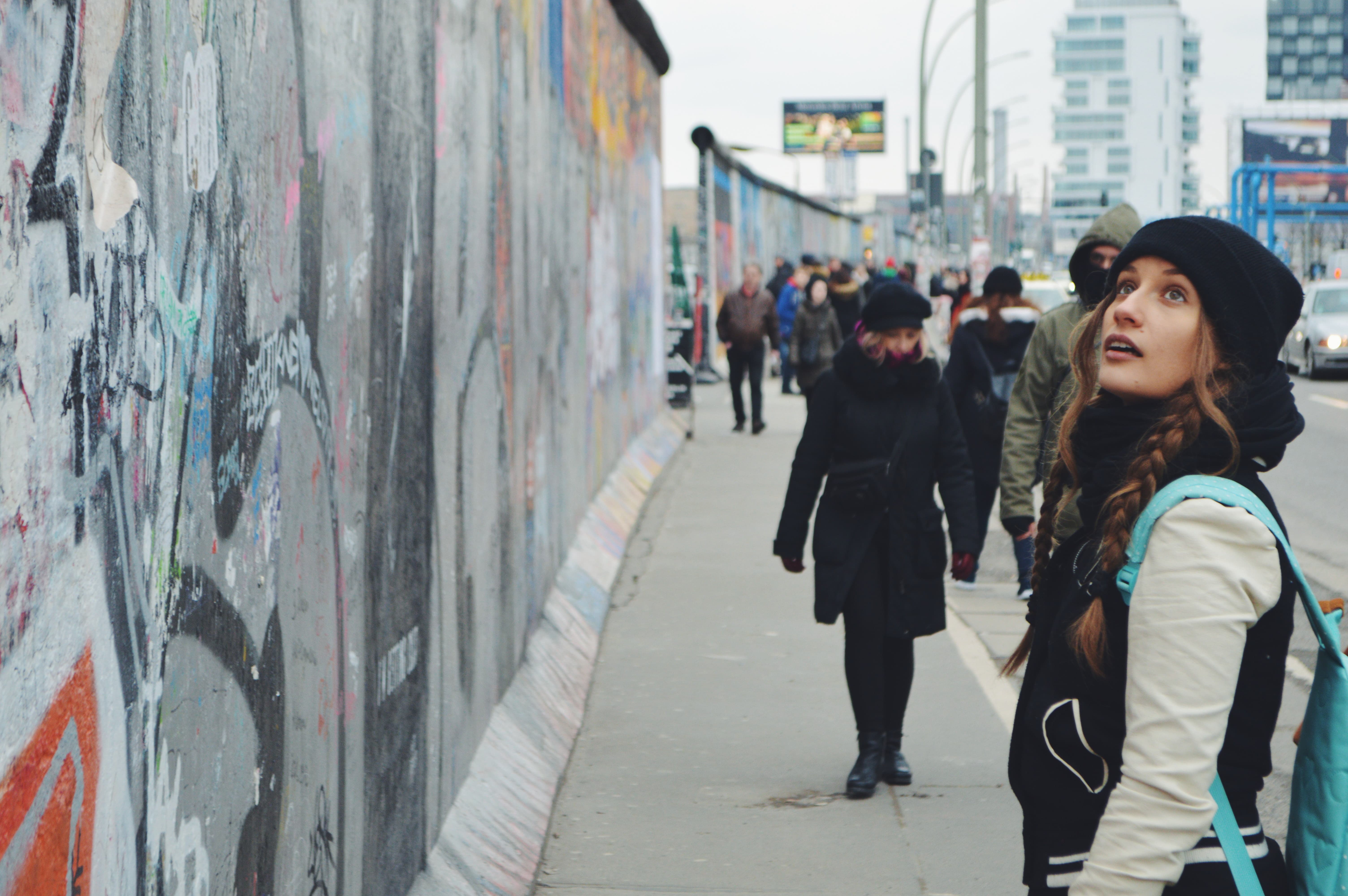 No matter how much we immerse ourselves in the modern look of the city, enjoying the miracles of contemporary technology, architecture; snicking into secret freeways in order to get some fresh air of cinema, music and graffitti, lots of graffitti – the “ghosts” of Hitler and his heirs lurk all around. Our generation, born in some other years, with curiosity look at the giant book volumes, asking parents and grandmothers, and with unhidden interest stand infront of what is left of the Berlin Wall, once long 155 km. The so-called East Side Gallery is the longest remaining part of the Wall, starting from the beautiful bridge Oberbaum over the Spree river, and the nearest metro station is Warschauer Strasse. The grey wall, a symbol of the Iron Curtain and the tension of the Cold War, is high over 3 meters, and between 1961 and 1991, has divided Berlin no longer only theoretically but also practically. The conservative, cold stone, on one of its sides – the Western – is a gallery itself – beautiful and symbolic graffiti tell about the Wind of change and draw the spoken and unspoken longings of Berliners. The high wall, the wire, the watchtowers and strengthened guardwatching, however, have not stopped the inhabitants of the city toreunite separated couples, parents and children, friends. Clever Berlinerss have digged tunnels, have hidden people in trunks, in the motor lids, and who knows what else that the chronicles still do not reveal. And so on, until November 9, 1989. 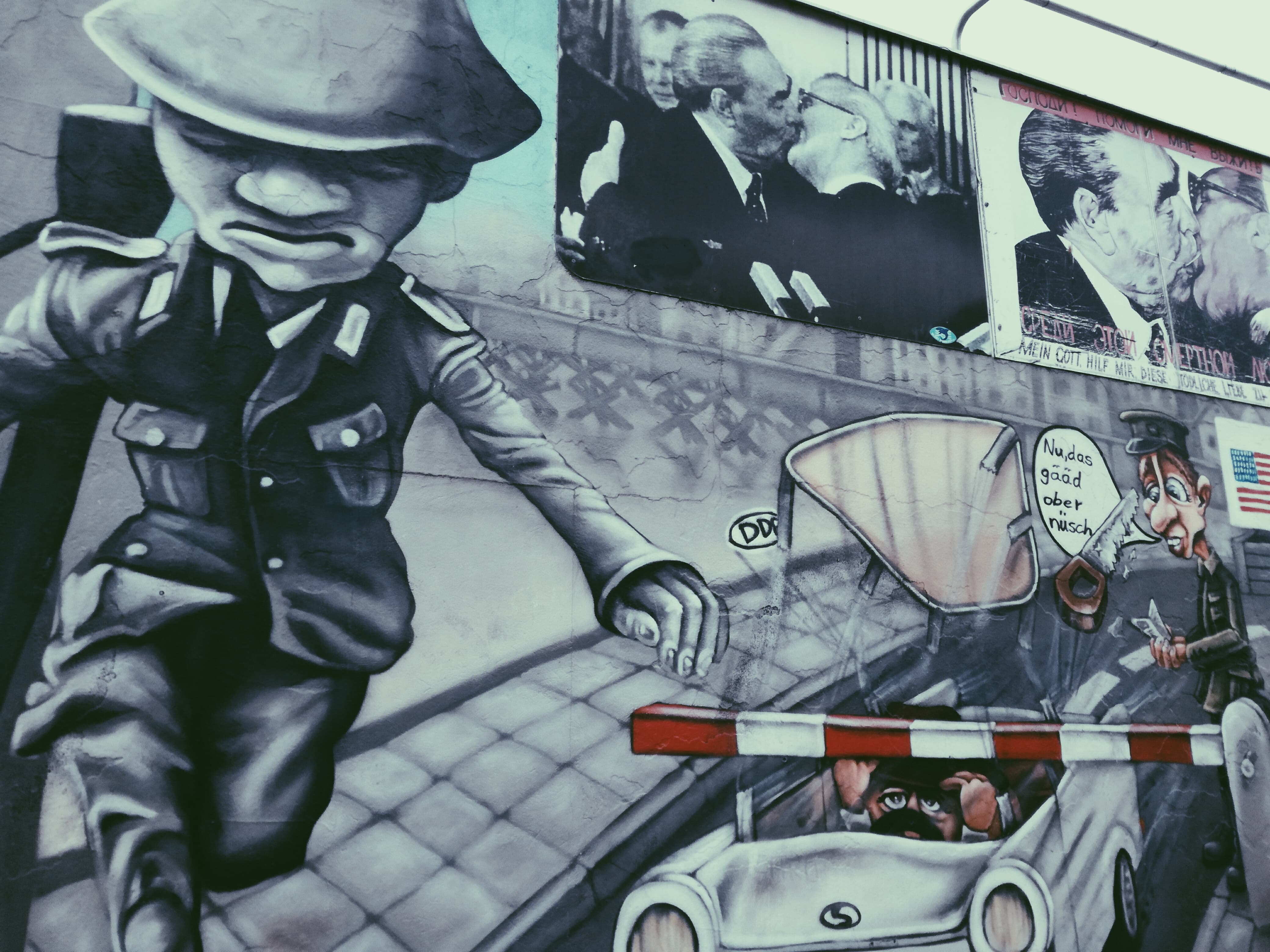 The most passionate and scandalous kiss in political history – Erich Honecker and Leonid Brezhnev.

We try to get as much closer to the Wall as we can, so to understand it. In a Monday afternoon we get to visit, by chance, the “Pay what you want”: happy-hour in the Berlin Wall Panorama. 18-meters visualisation of Die Mauer (The Wall) by the artist Yadegar Asisi is placed right next to the must see point of Checkpoint Charlie – the pass-trough point between East and West Berlin where we “leave” the American sector. 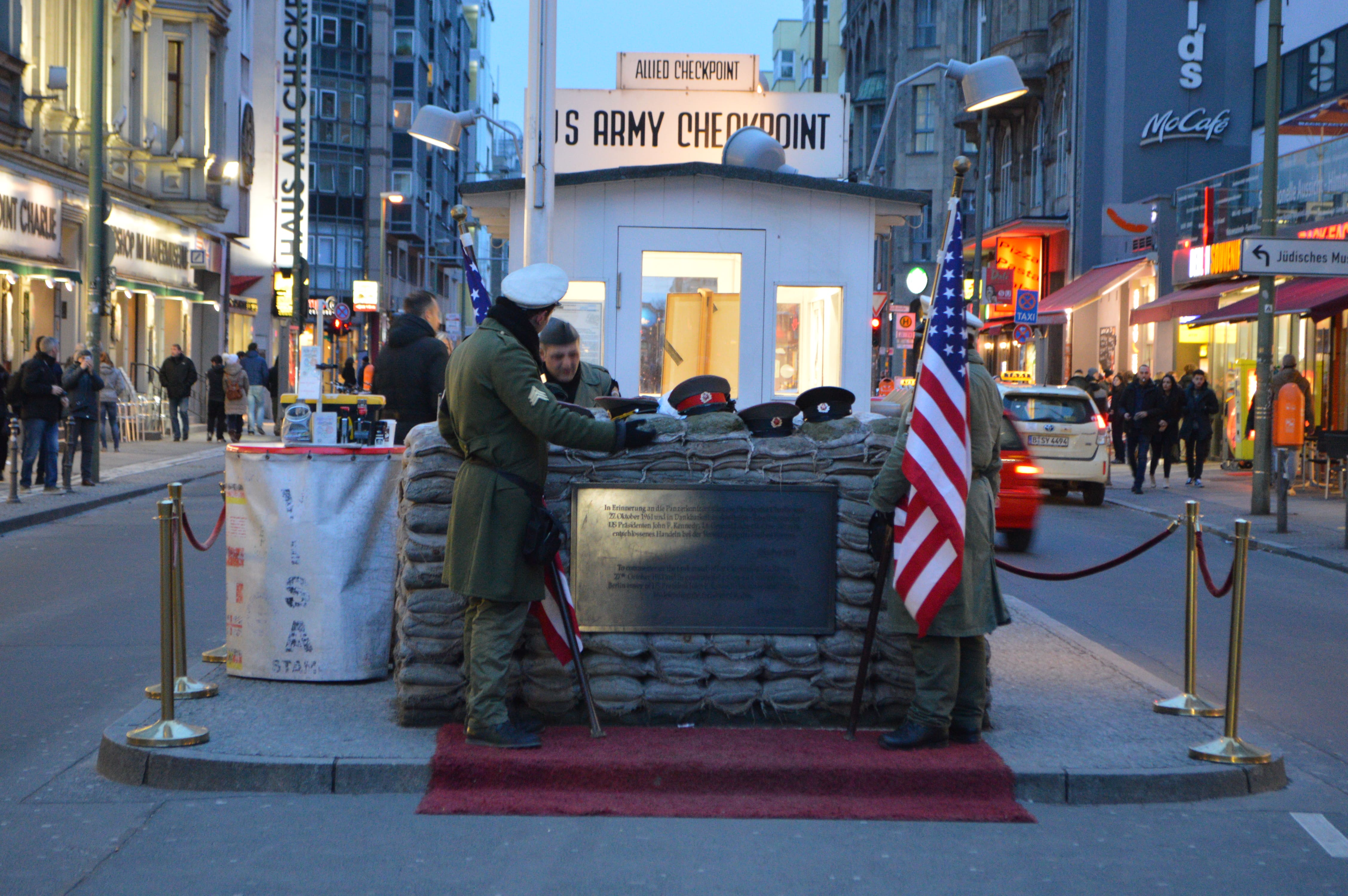 Not that far away from the Brandeburg Gate is stuated the fairly new (found 12 years ago)  monumnt – the Jewish Memorial deicated to the victims of the Holocaust in Europe. The giant stone blocks, more than 2700 pieces, all different in height and size, are placed in an immense labyrinth which reminds us of an enormous grey graveyard. The Memorial is opened for visitors all time of the day and there’s no entry fee.

Berlin is as grey and stonecold, as it’s colorful and chaotic. So diverse that you can be easily confused; and in any time of the day it’s under a different light. Westeuropean conservatism, medieval dignity, military hardness, many beautiful buildings, diverse inhabitants, classical and avangard arts, technology and non-stop fun and nightlife are merged into one, at first sight, incompatible combo. But one thing is for sure – just like being with a growing up teenager, your time just flies with him. You’re confised but still have a lots of unanswered questions,no matter that youé just had so many answers given. And you know you’ll get to meet again and yet again it will find something to surprise you with. 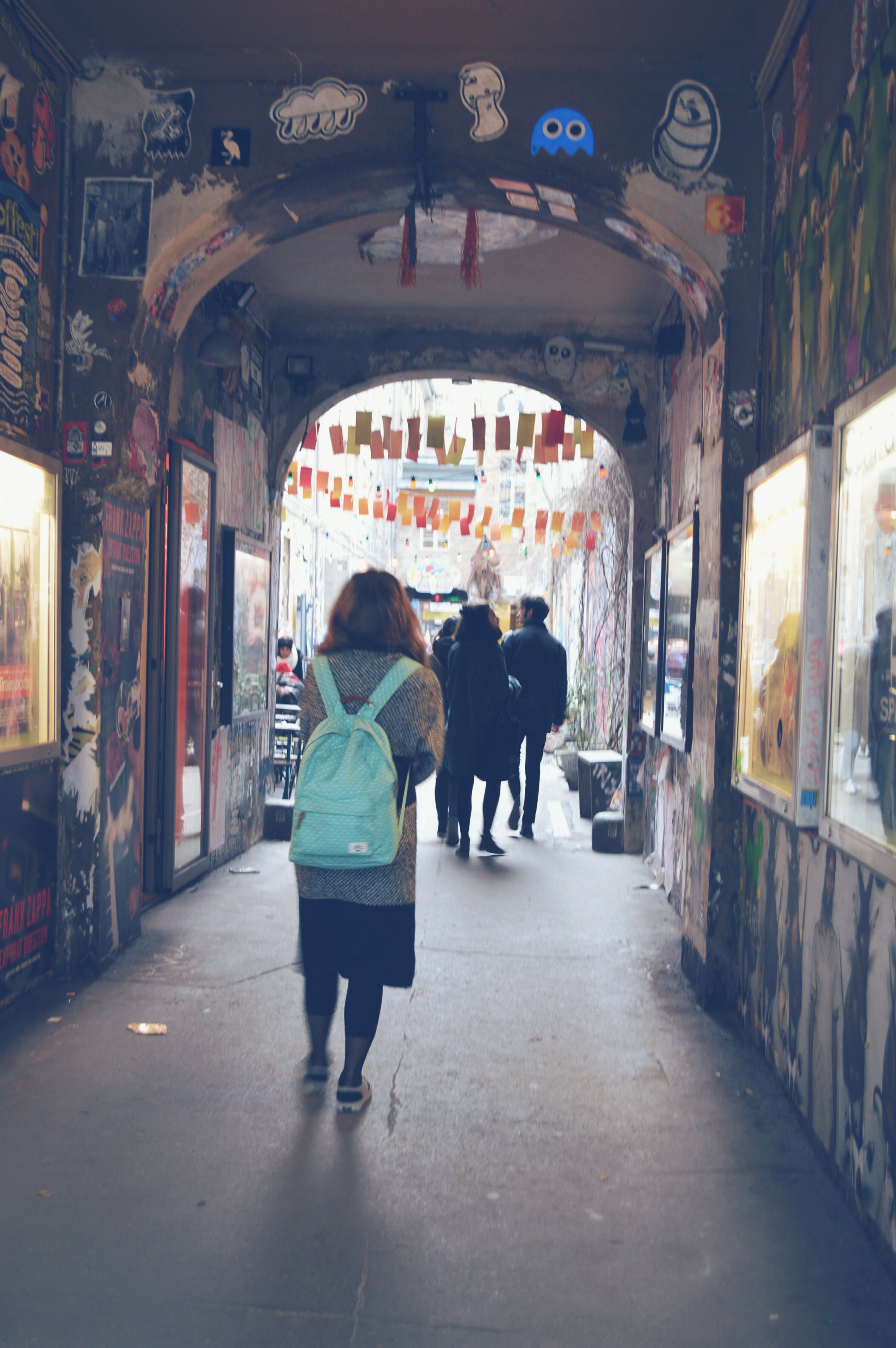 Then (more) things to do while in Berlin:

Text and pictures Rada Boneva.
You can follow Rada and her adventures on her instagram profile and also her personal blog!

Ecopath "View to the nine mountains"