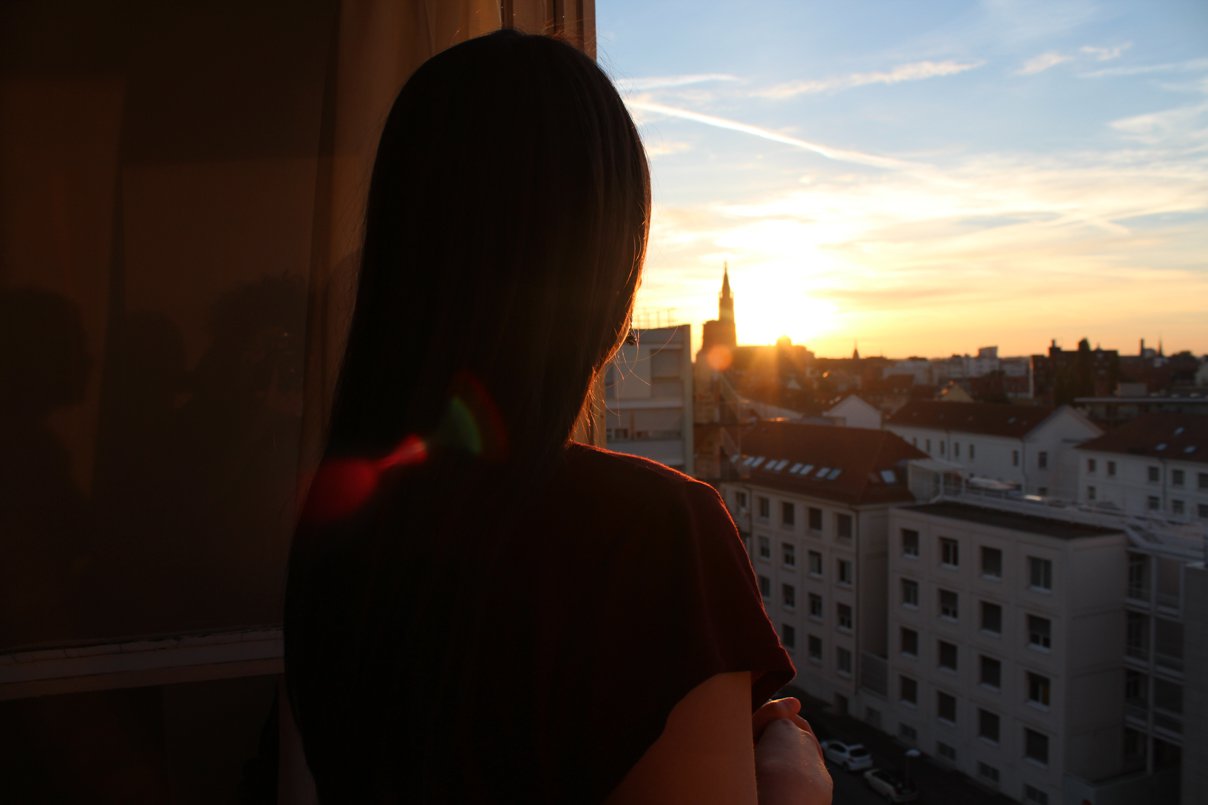 Strasbourg is situated in Alsace, a region with an atmosphere that isn’t typically French. Divided between two cultures, the French and the German, the city has its own charm and while walking down its streets you may think that you’re in a fairytale. 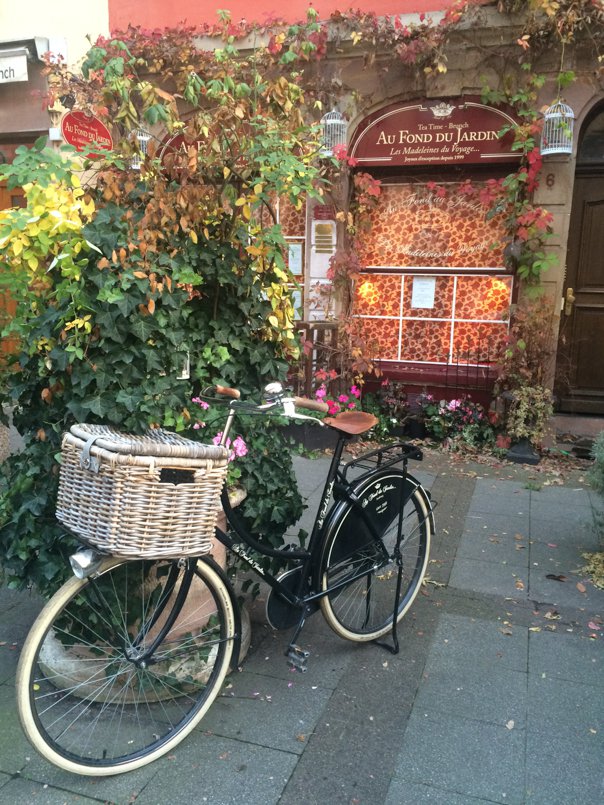 Coming here for the first time four years ago the cultural shock came over me. The weather – cloudy. August. Rain. People from different races and religions. I came with my parents and I couldn’t admire the beauty of the city. Everything seemed so dull in comparison to Bulgaria. I stared at the plane ticket to Sofia with teary eyes. I sobbed until I fell asleep, left powerless. I wanted to go home. On the next morning I opened my eyes and the warm French sun illuminated me, caressing me with its warm rays. The regret was gone and then came the excitement. And I found out right then and there that Strasbourg was going to become my second home. 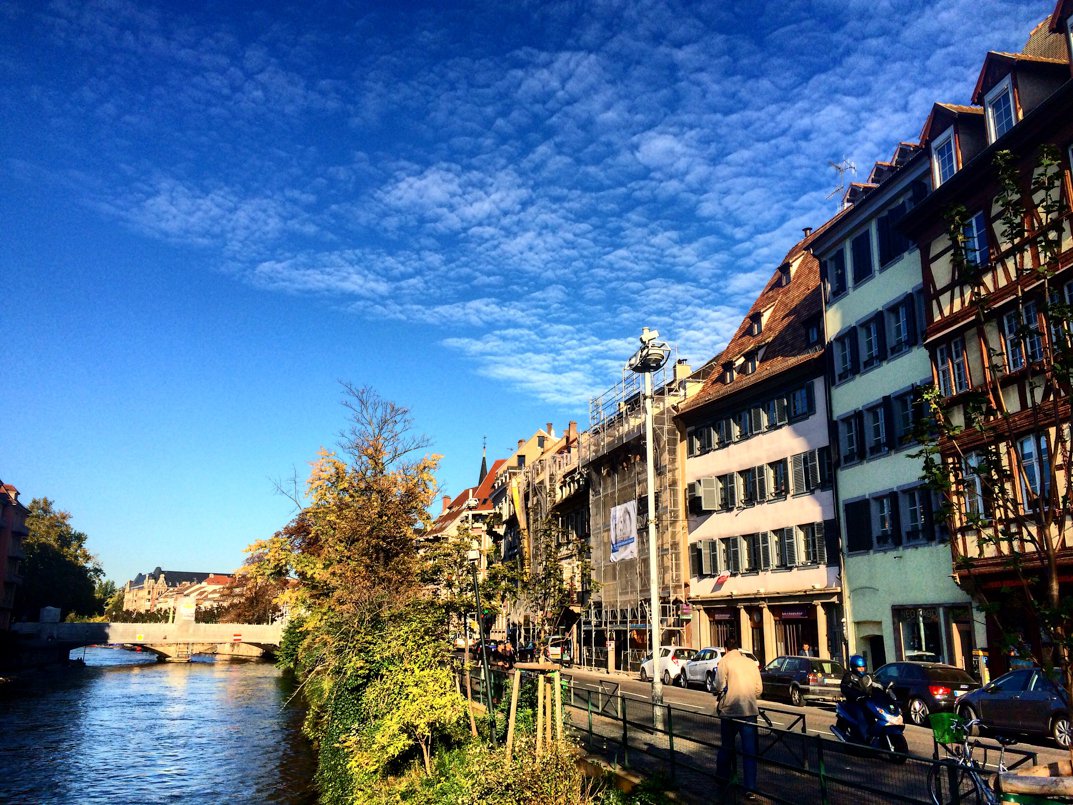 My adventures in Strasbourg are in the museums, the grand cathedral, clouded in legends from ancient times, leering scarily over every small person looking at it; the restaurants and the small cafés, hidden in crooked streets. Strasbourg shelters a lot of different cultures and races. The city is home to Italians, Russians, Bulgarians, Africans, Indians, Americans… I cannot count all the people coming from every end of the world, the city is that colorful. The University of Strasbourg is the biggest in France with over 45 000 students. The campus is huge, but the buildings look like the work of a lazy socialist architect. But no, I’m exaggerating. In the middle of the campus there is a beautiful green garden where the students sit down to read or to talk with their friends. Some play the guitar (the faculty of music is right there), others fill the air with their laughter… 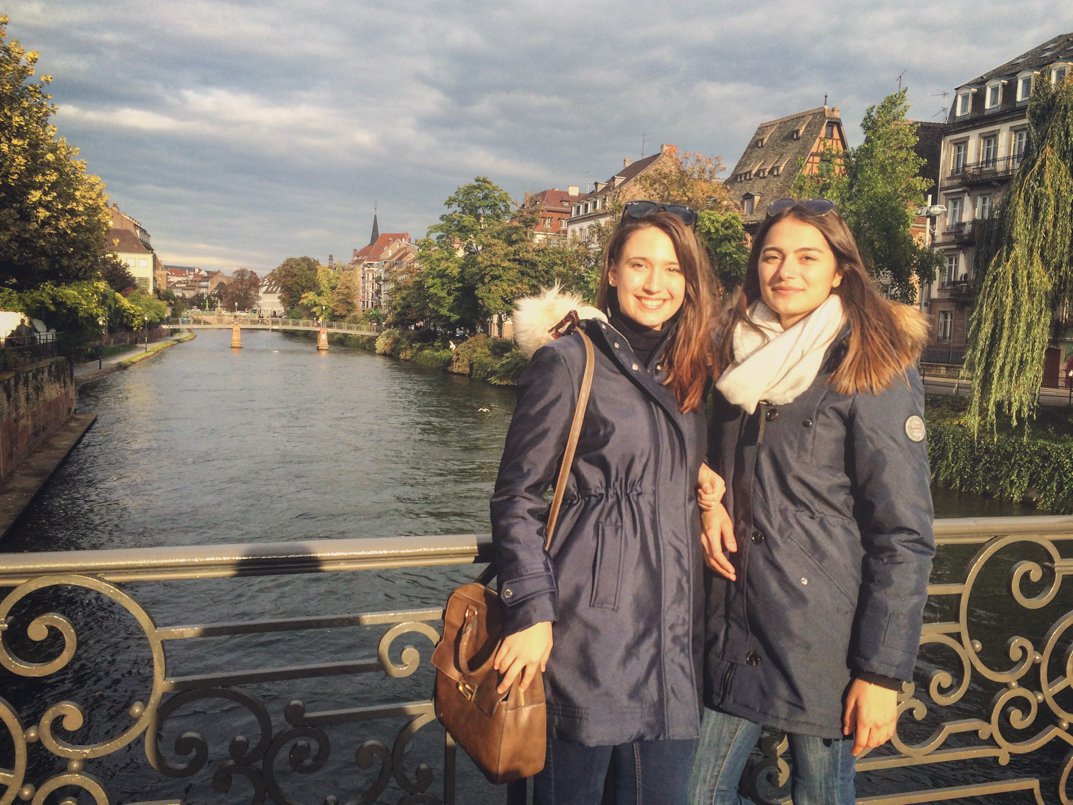 The young people go out with their friends to drink beers or eat tarte flambée, which is one of the most famous dishes in this region. A lot of people describe the tarte flambée like a thin pizza, but regional folk are offended by this comparison. The dish is made by a very thin layer of dough, sour cream, onions and lardons, this is the classical flambée, after that there are many variations. One of the most visited places is Au Brasseur and Flam’s where prices are cheaper, their most ordered dish is indeed the tarte flambée. Another famous dish is la choucroute, very fine cut cabbage with meat (which I’m in love with). I won’t continue praising the food of Strasbourg, because the text will resemble more  a recipe than impressions of the city. 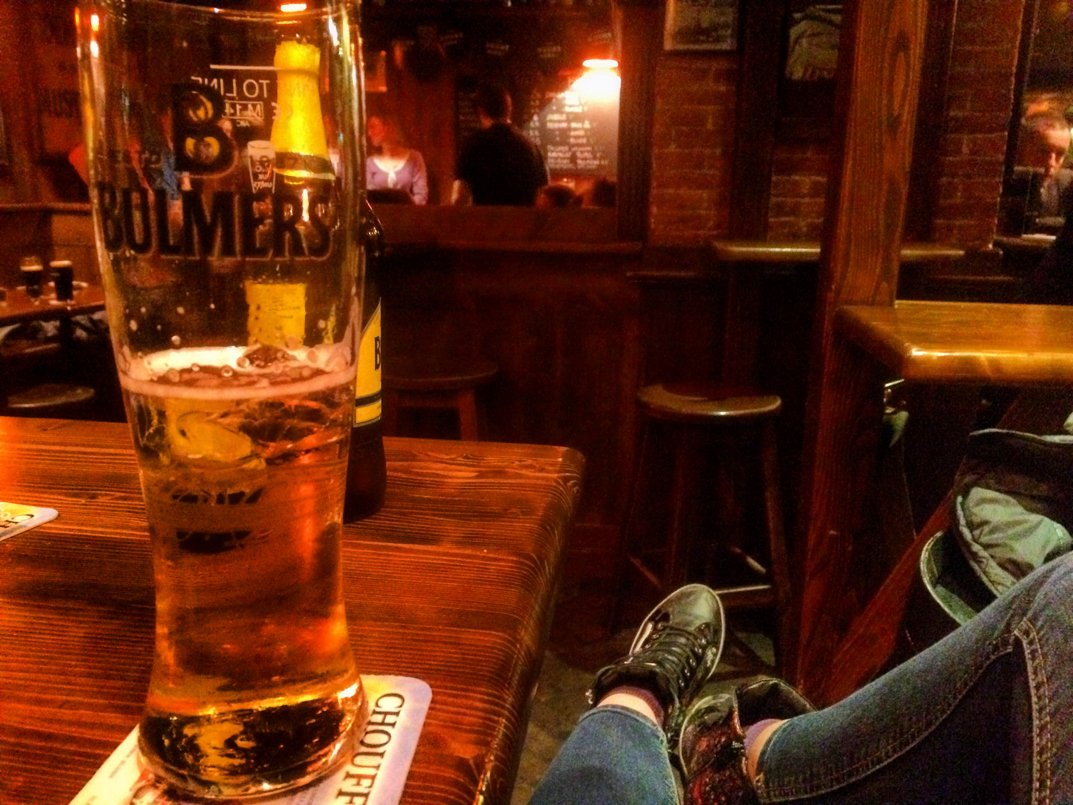 In Strasbourg the museums are a lot and one of my favorites is Palais Rohan, situated next to the cathedral Notre Dame, where Marie Antoinette lived, and Napoleon visited and later accepted guests. There are three wings – art, archeology and the apartments of the aristocrats . People can visit all three and admire the beauty presented by renowned artists like Gustave Doré, who’s born in Strasbourg, Sandro Botticelli, Monnet, Renoir and many more. Other museums who can be interesting for the visitors of Strasbourg are The Museum of Modern Art, The Tomi Ungerer museum, the historical museum (a labyrinth of facts, pictures, decorations, clothes and jewelry), The Alsacian museum and a lot of others that I haven’t visited yet. Every month there are cultural events and competitions in different ends of the city; some are organized by the students of Université de Strasbourg. 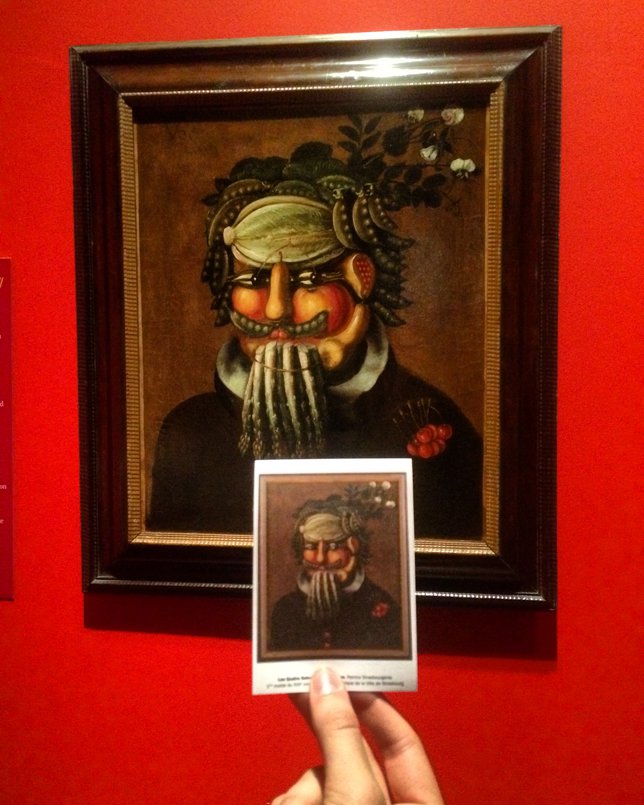 The bars of Strasbourg are many and always full. Most of them are small and closed, but have their own charm, like La Taverne française, bar Berthom, L’Alchimiste, Académie de la bière, etc. All of the restaurants propose the famous tarte flambée and choucroute, les escargots are a luxury and the beer is mandatory. Some excellent restaurants are Au Canon, with a beautiful view of the river and the top of the cathedral, Le Tire-Bouchon, which is a little pricy, but the food is amazing and Au Quai de L’Ill.

Winter is the most anticipated season. Strasbourg is famous as the capital of Christmas and le marché de Noel attracts millions of tourists from all over the world. Warm wine (vin chaud) is flowing on the stands, typical Alsatian food is sold, as well as souvenirs, Christmas cookies and decorations. ‘‘’Le marché’’ is open for a month and the holiday spirit is hidden in every corner.

The cathedral Notre Dame is one of the biggest cathedrals in the world, finished in 1439, and looks down upon its visitors with its 143m, who can go on top of it and admire the beautiful panorama. An old Alsatian legend says that the cathedral is the windiest spot in Strasbourg because the devil’s grandmother lived there. And when he came to visit her, he got stuck between the sacred place and the outside world. Therefore every day he tries to escape his prison and the winds hurl in front of the cathedral. 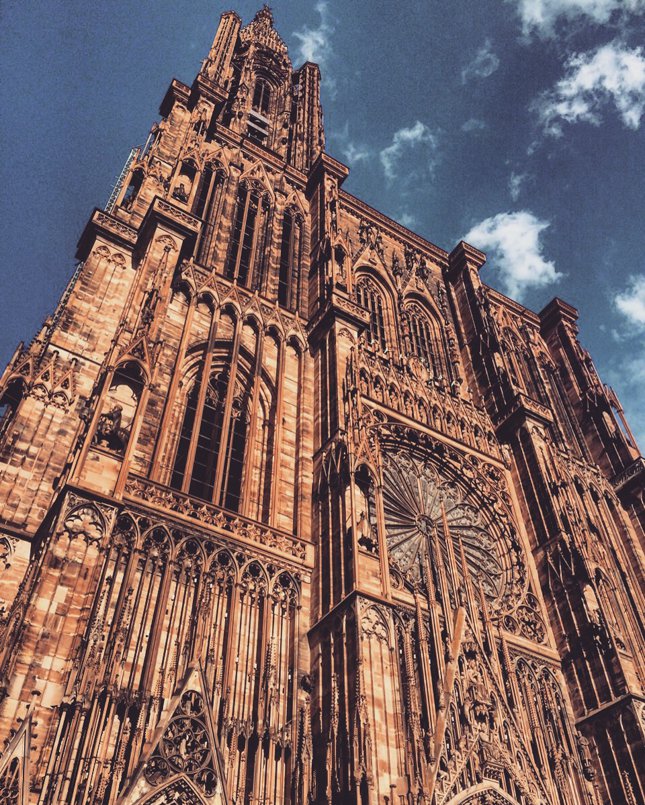 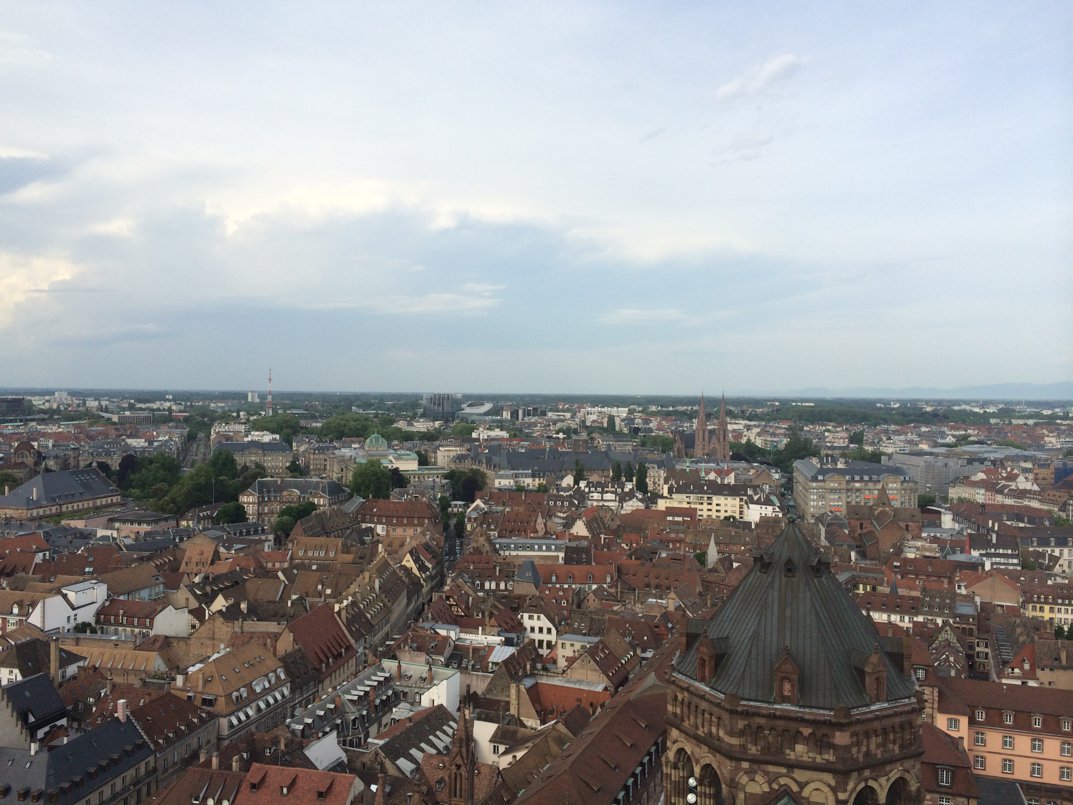 Alsace is a one of a kind region, divided between France and Germany. The people are joyful and warm. The elders speak Alsatian, the street musicians are on every corner and the students fill the city with life and joy. Situated on the border with Germany and Switzerland, people occasionally visit the other countries. The city is a symbol of the diversity of nations and races, symbol of the splendid Alsatian cuisine, of the art, the literature and the music. The architecture is unique and can only be found in this region of France and every person visited the heart of Alsace rests amazed after the meeting. There’s always going to be a place in my heart for Strasbourg, I’m sure Strasbourg will always has a place for me as well.

The Happiness to be an Italian #Florence 4

The Maiden from the Rock   “I don’t know what are they doing here – I think they might be eating our monkeys.”...

The happiness to be an Italian #Genoa  The Italian Gothic rivieraGenoa aquariumTorre della LanternaCathedral of San...