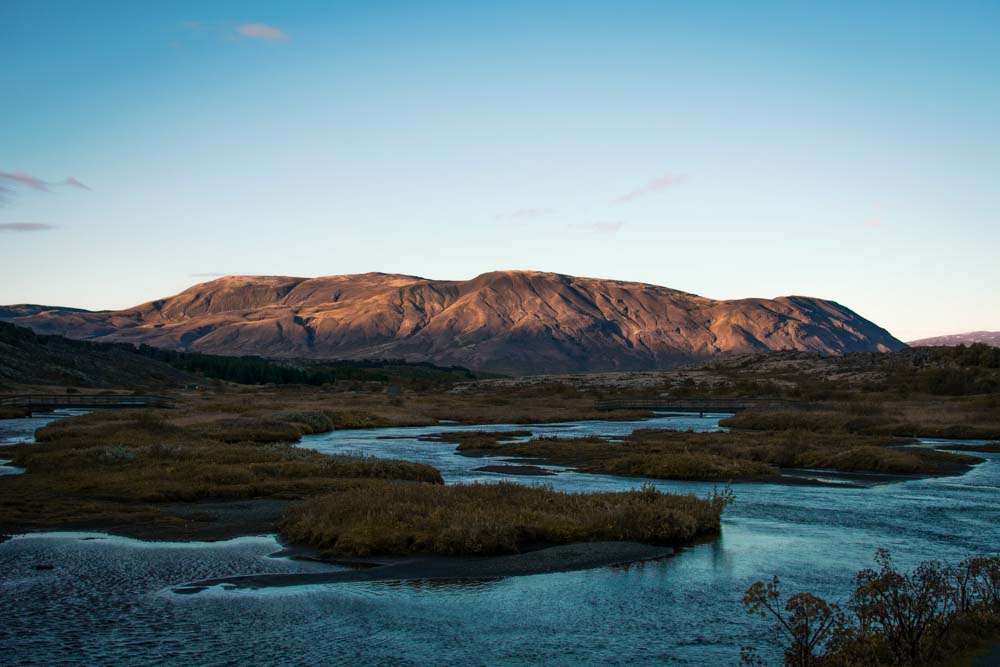 “Travel is more than the seeing of sights; it is a change that goes on deep and permanent, in the ideas of living.” 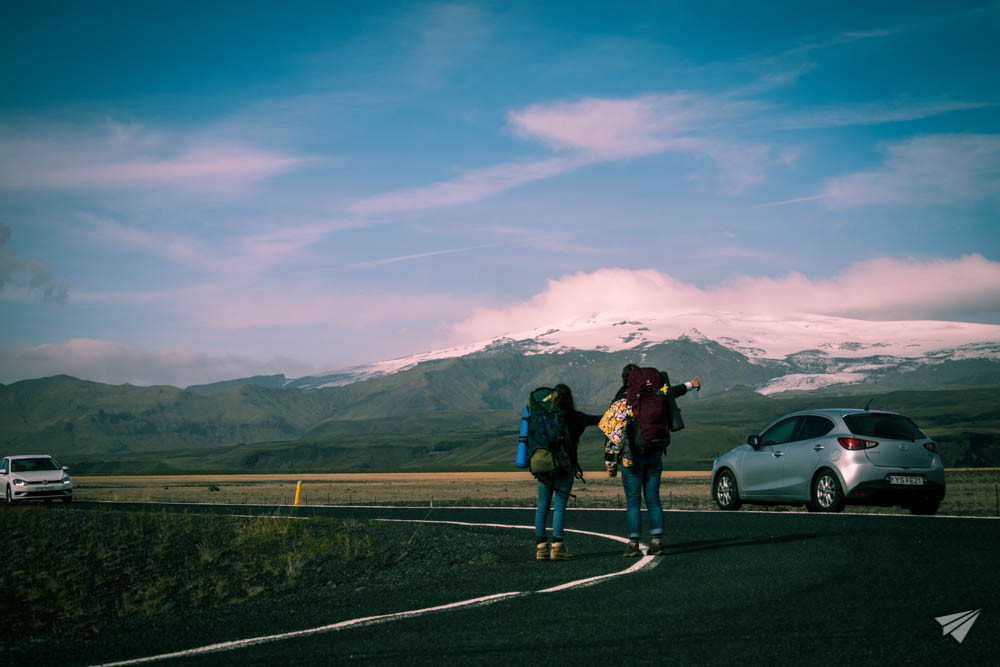 The biggest cliches are usually true. And maybe this is why they are cliches.  Ordinary and time-worn,the phrases like “Go where you feel most alive”, “The journey is the destination”, “Live, love, travel”, impersonate the hidden desire of every free spirit, with curiosity for the unknown and thirst for adventures. So is Iceland banal. In front of you – an endless horizon and yet you’re impressed by your soft steps in the moss. Behind you – an active volcano, but you keep staring at the orange pink clouds. In the distance – you can hear a vigorous waterfall,but you admire the taste of the clear Icelandic water from the river. This can go on forever… because Iceland is a cliche where you sleep under the stars,chase the waves, gather tiny stones as a memory and you are happy, as someone will say that the world is just this little island where problems and everyday issues do not exist.

Our adventure in Iceland began with a walk in Thingvellir National park and then we drove long towards the, interior of the island. So long that the sun was way gone and everything around was complete darkness. We’ve decided to spend the night near the Langjökull glacier. We were driving on a dirt road and with the time flying by, we were this close to giving up,but the place wasn’t that far… When in the middle of the darkness a thin, not very bright green line irradiated in the sky. It kept changing its shape,becoming brighter and fading within seconds. 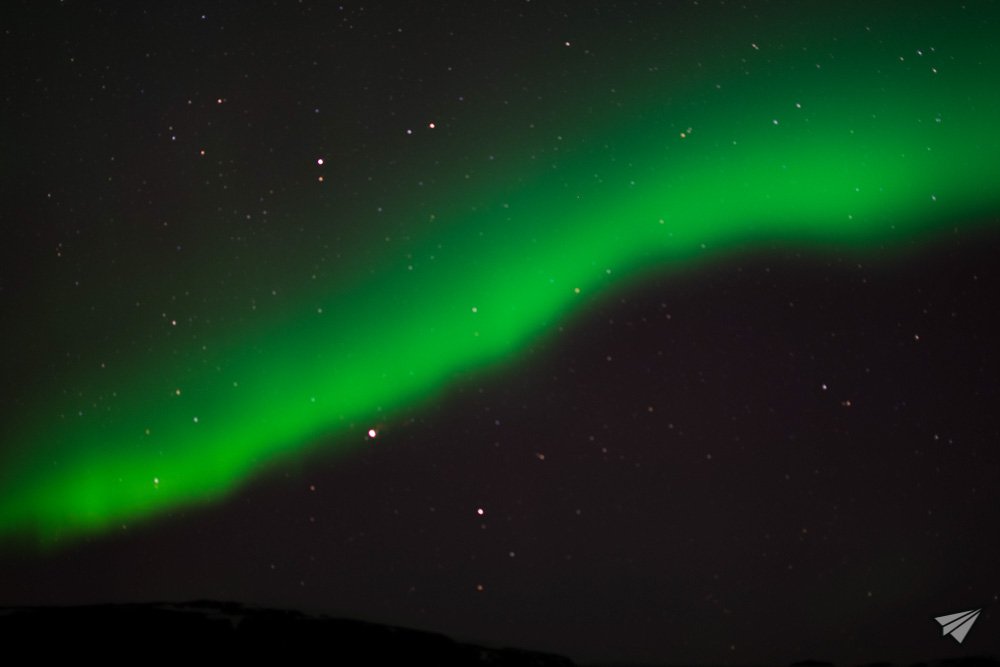 That was it – we weren’t really looking, not even expecting the Aurora, but it found us. Don’t talk me physics,this is pure magic. Somewhere between the driving and the shoving of my face into the windscreen “so I can have a look too”, we found a really comfy place where we pitched up the tents over a blanket of soft moss. Comfortable will be quite ambitious to say the least for this first night. I would rather say explosion of emotions. While dining, we were freezing but somehow, we made a couple of long exposure pictures of the Aurora. But even that couldn’t keep me awake, so I hurried myself to sleep. (Mistake number one – never fall asleep while still cold.) 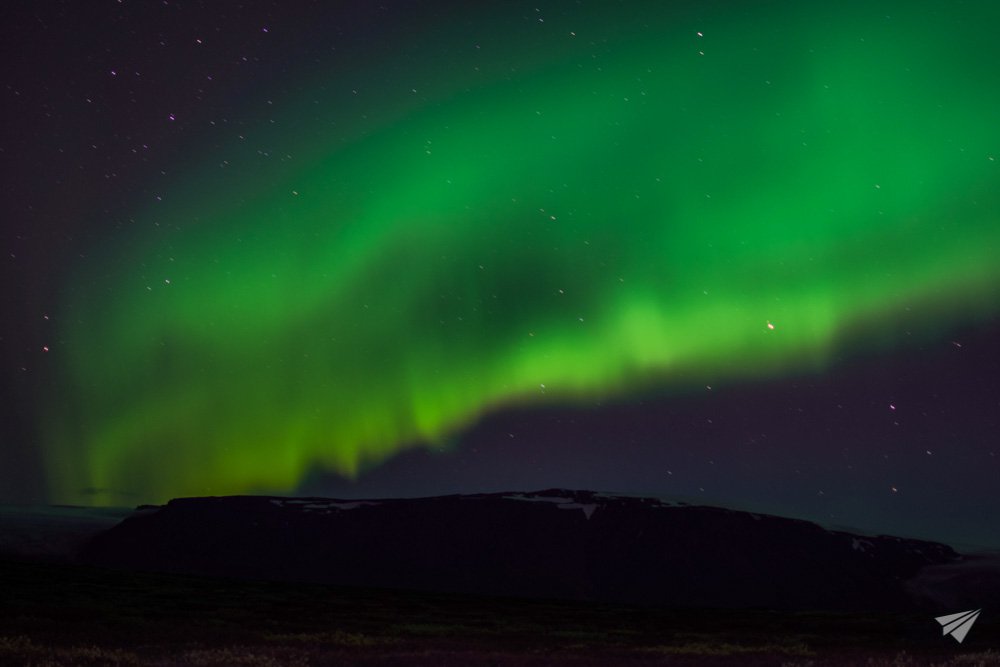 So logically, the morning after I woke up still freezing and in my usual bad mood, but it didn’t last for long because when I got out of the tent I realized where we actually were. In the middle of nowhere. Literally. Far from any trace of civilized life, but what a place! On one side of the road everything is covered with moss until the glacier river, which goes into the lake nearby and in the distance,  you can see the massive glacier. On the other side of the road there were only huge rocks and no sign of life at all. We were joking that it’s the perfect place to film a movie about Mars. 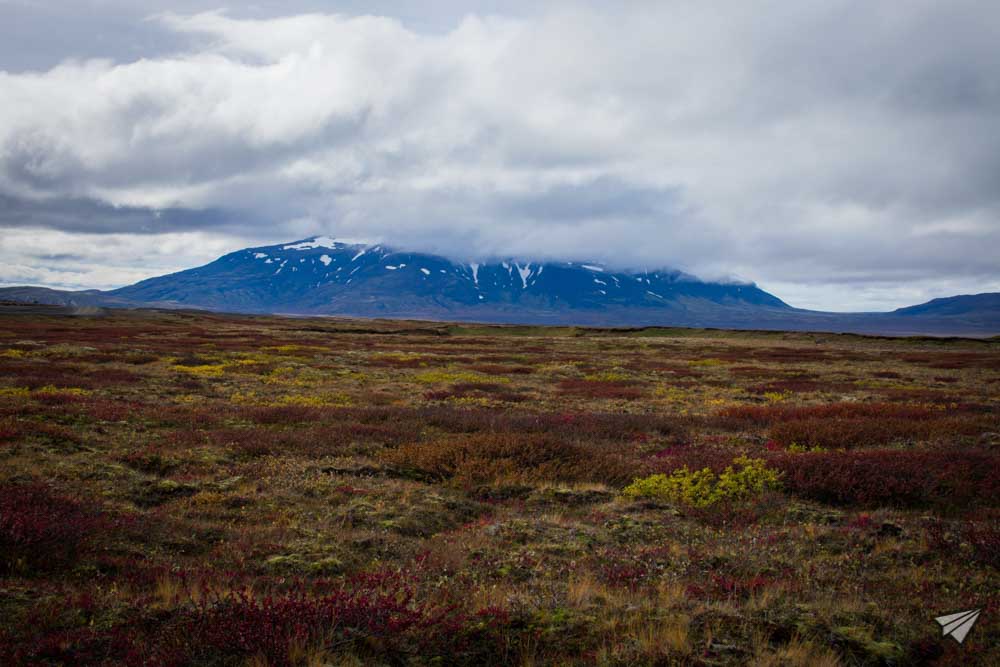 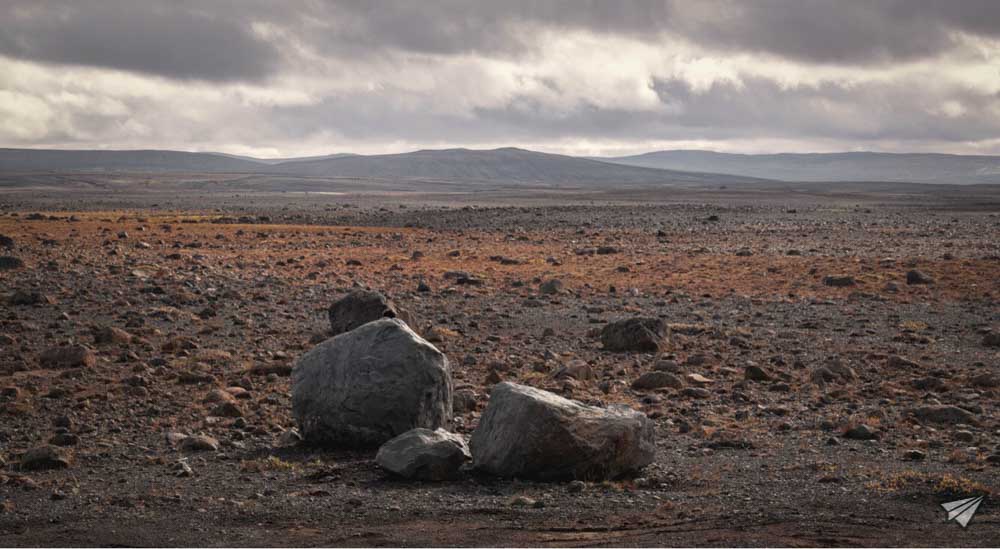 So, we drove off, excited about everything we were going to see for the next one week, but who would tell us that the thing we’ll remember forever deep inside of us has no name and destination. 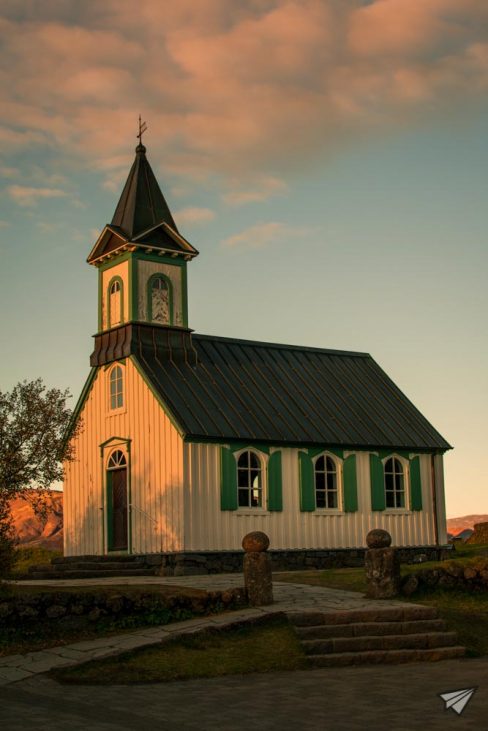 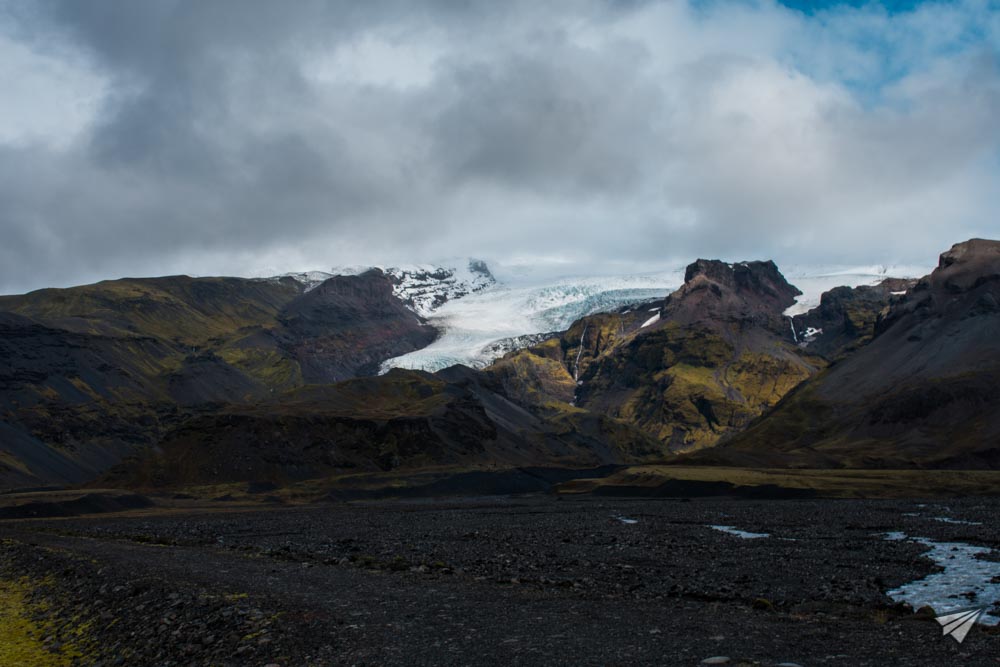 And really – the journey itself was my favorite“destination”. The small towns with their colorful churches that we went through while stopping to refuel. The gorgeous mountains, volcanoes and volcano fields covered with moss are said to be the homes of the elves.

Little waterfalls in the distance, with no access to them, but there is a small farm underneath them. The meadows by the road where you can see the Icelandic sheep threading quietly and the Icelandic horses, wild and obedient at the same time.

We were mostly driving on the ring road which goes around the island. It is nonetheless picturesque, but I was more attracted to the dirt roads. Not only they gave us the time to explore every detail of the horizon but they took us higher and lead us to different “roadside attractions”. One of those roads goes to the isolated mountain Vestrahorn. Somewhere on the side of the road there is was lake merging in one with the sky and all you can see is the endless blue horizon. From time to time a view to the ocean unveils – seemingly quiet and peaceful from distance. 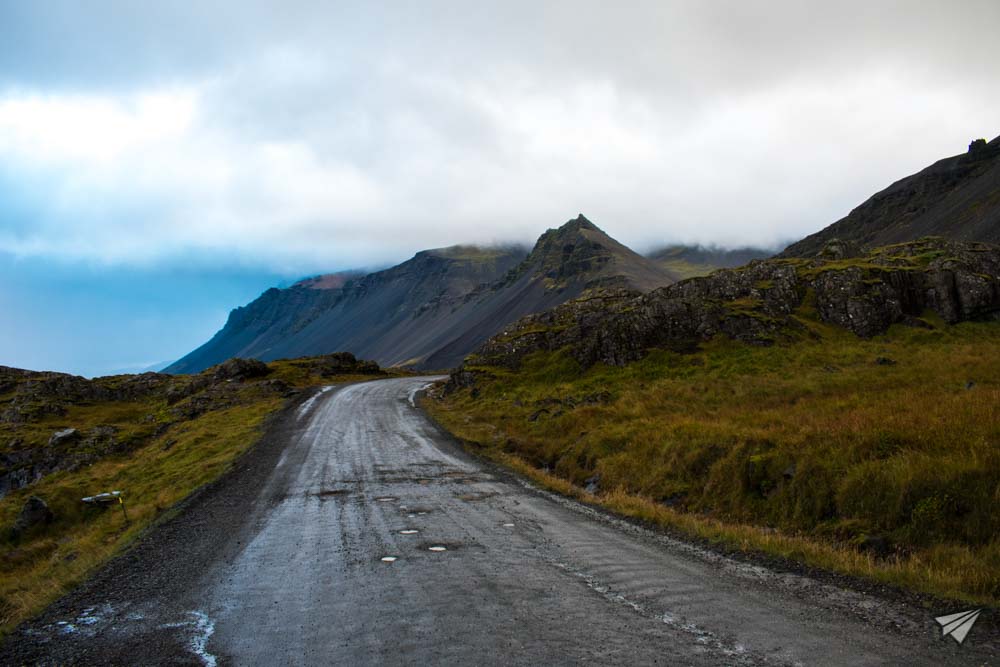 But no matter how unbelievable everything was, I took it as normal. I took it for granted. It wasn’t there because of me. It was there before and it will be there way after I’m gone and as beautiful as it is – I’m just a bystander. I will never know what it’s like to have a farm under a waterfall or to prepare for the winter, because as they say, winter is tough out there. And I would just pack my backpack with the little stones and good memories and leave. It really is beautiful, but there are many beautiful places on Earth. 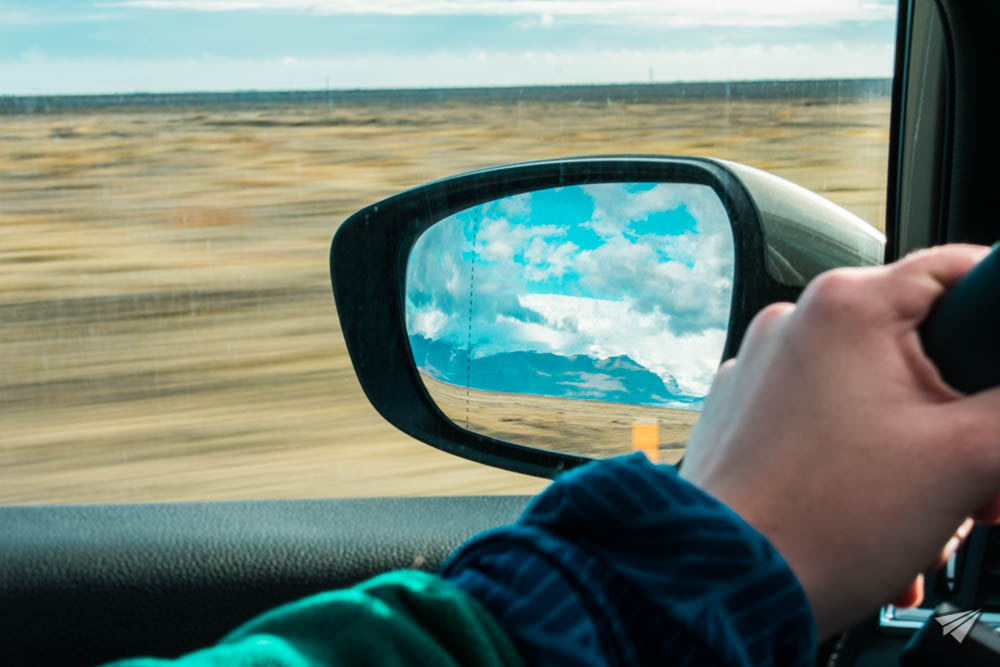 As I made my peace with this, Iceland surprised me and transformed me into a cliche for a couple of minutes. The day before we left while we were driving to the Snaefellsnes peninsula on the west coast, we were spending the golden hour on the road as usual. And somewhere there on the winding turns between the mountains, the low clouds below us colored in the spectrum of pink and orange. On places you can see the blue still sneaking as are minder that everything is real and it’s the same sky from a moment ago. Pink Floyd playing and the golden light is hitting the front of the car. With every next turn the colors would be brighter and I would be less likely to believe it’s real. In moments like these you just wonder whether to cry out of happiness, to scream out of excitement or to stay silent and try to remember everything. 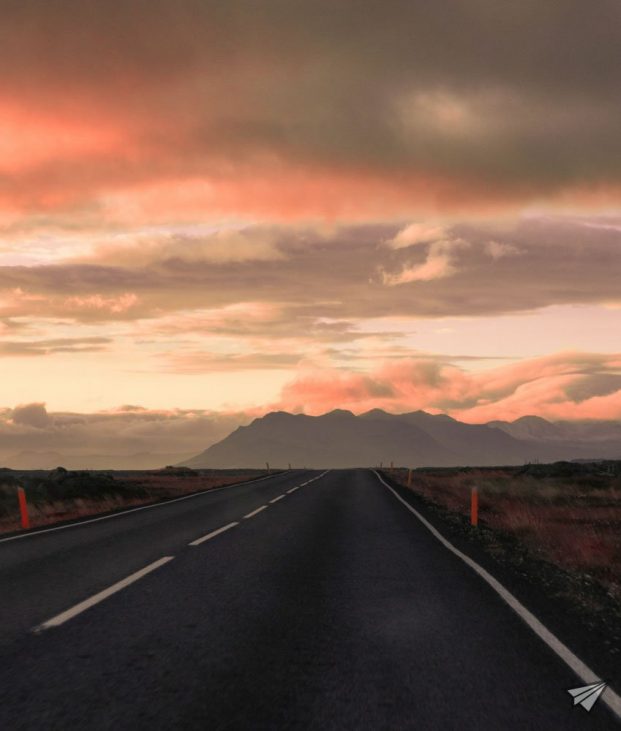 Right there, still in euphoria I thought (although my mixed feelings about religion and everything that has to do with it) that heaven is not a place. What people are looking for is not a destination. The most beautiful scenery isn’t always the same. The most precious moment isn’t universal. My heaven was an absurd mixture of colors, light, music and the result from a week of sleeplessness and my dulled senses from everything we saw during that week and believe me – even three months wouldn’t be enough to explore the island. But maybe this is the purpose of visiting Iceland – to find your cliche even just as a guest. To remember it and to keep it in your thoughts from now on. Heaven exists, lasts just a couple of minutes and everything less than that is just filling the rest. And to end that cliche I’ll tell you: Look for the moment you can’t put into words. Who knows, you might as well find it on the edge of the polar circle?

Past through the present’s lenses I am a true wanderer on this Earth but it is good that there is someone who...

Edinburgh – hills, bagpipes, shortbread biscuits… and university   Edinburgh, the capital of Scotland. It is...